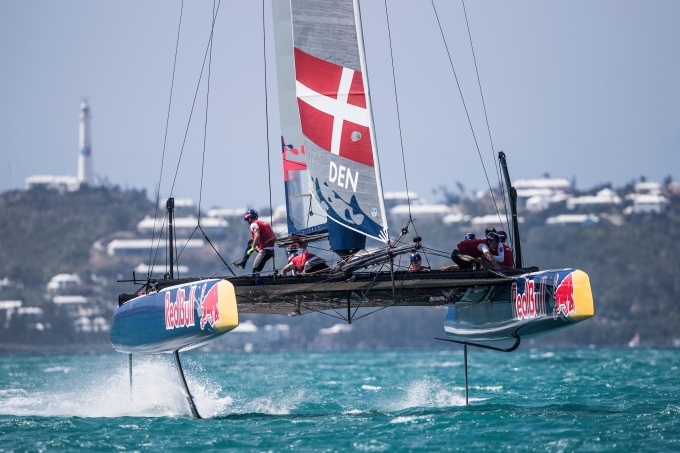 America’s Cup Village (Bermuda) – After months of anticipation, the next generation of sailing superstars hit the waves on Bermuda’s Great Sound this week for the first Official Training session ahead of the Red Bull Youth America’s Cup. On the same waters sailed by the senior teams, the six national teams aged 18-24 who form Pool A are training on AC45F catamarans from May 28 through June 3, followed by Official Training for Pool B, Qualifiers and then the climactic Finals on June 20-21, 2017.

“Bermuda is an incredible venue for sailing. The weather conditions and the water are absolutely amazing!” enthused Gustav Pettersson, 23, of Artemis Youth Racing. “The AC45F is really fun to sail, our training has been really good so far, there is still a lot more to learn, but we feel that we are at a good level once we are sailing at our top performance, and we are relentlessly chasing the improvements to maintain that level to be in a strong position. We are very motivated to keep pushing.”

“The Red Bull Youth America’s Cup was created to provide a path toward a professional career for top young sailing talent, and Official Training is a big step on that journey,” said Hagara, who with Steinacher won two Olympic golds for Austria. “These AC45Fs are a challenge even for the pros, especially when they’re flying on their foils. But these sailors are tackling a very steep learning curve with outstanding fitness and teamwork.”

The 45-foot AC45Fs are the same catamarans used by professional sailors in the Louis Vuitton America’s Cup World Series. To ensure a level playing field, the six-person teams were allowed no more than seven days of practice with an AC45F before the commencement of Official Training, where Hagara and Steinacher personally share their expertise.

Official Training for the Pool B teams – from New Zealand, the United Kingdom, Spain, the United States, Austria and Bermuda itself – is June 4-10. Then the stage will be set for Pool B Qualifiers on June 12-13 and Pool A Qualifiers on June 15-16. The regatta will reach its climax when the top four teams from each pool advance to the Red Bull Youth America’s Cup Finals, live on Red Bull TV June 20-21.

“We were used to sailing alone during the last few months, and we are delighted to finally be racing with other crews of our generation,” noted Robin Follin, 22, of Team France Jeune. “We’re getting the measure of the complexity of the AC45F over the hours spent on the water, and we are aware that the level will escalate, right up to the qualifying phases and the Final. All this suggests a beautiful battle on the water – we cannot wait!”