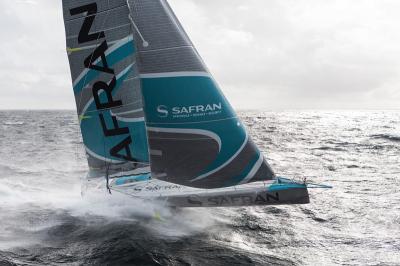 One thing is now certain: within a few years every monohull in the Vendée Globe will be fitted with foils, as the advantages of the new appendages are undeniable. However, all the skippers entered on the latest generation boats now have to learn how to master operating them.

Out on a training session on Safran: The monohull is flying in a crosswind of around 20 knots. From the cockpit, Morgan Lagravière prepares to slide the downwind foil from its housing. A toggle switch linked to a hoist will allow him to deploy the appendage without much effort. With the speed of the boat, the foil begins to work, gradually lifting the hull. Then, with the acceleration, the lift of the foil increases again and gradually the front third of the hull is out of the water.

On board, the boat's movements are becoming more violent, and due to the speed variations, the autopilot is making increasingly frequent course corrections. But Safran is now flying along at almost 30 knots: later we will see that the GPS recorded an average speed of 28 knots for several miles during this test.

For Morgan, like other skippers in new generation IMOCA, the challenge now is to take account of the new parameters when using of these new foils. The first problem is to get used to it being more uncomfortable.

“With the foils, life on board is even more difficult,” Roland Jourdain, who has been able to see for himself the difference in behaviour of these new generation boats, says. “Besides the infernal racket, which is particularly loud coming from the foil, you have to also learn to guard against the sometimes very sudden movements of the boat, especially during deceleration. We're now exploring with Morgan about him wearing clothes that will absorb some of the knocks that will inevitably happen.”

Another difficulty, is managing the added power of the foil. Morgan is conscious of the risk: “You have to avoid getting carried away,” he says. “The use of the foils can create a thrust of more than two tonnes. So, it's a power boost that we have to learn how to manage. Paradoxically, you can't hesitate in reducing the sail area early enough to prevent excessive force on the rigging. On a conventional monohull it's the angle of heel that will be a good indicator; on a foiler, the skipper will feel the boat is overpowered…it's something that is much more subtle than it seems.”

Finding the right limits, getting familiar with the behaviour of his boat and mitigating the discomfort – sailing the latest generation IMOCA will require a real ability to adapt. “Coping with new developments and finding solutions is just what Morgan loves to do,” even if it's Jourdain who says so himself!