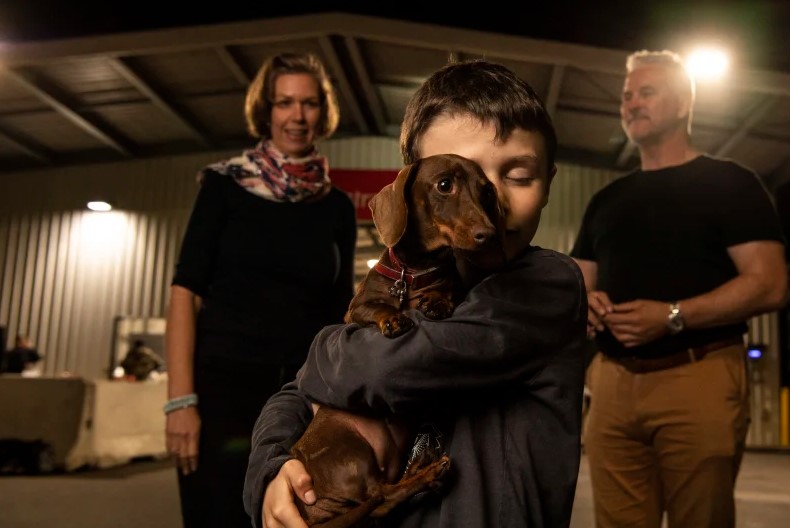 On a wing and a prayer, Pip the dachshund – stranded in the United States for five months – finally arrived home in Sydney on Tuesday night.

In emotional scenes at a chilly Virgin freight depot in Mascot, the VIP (very important pet) was led out by a crew member to waiting owners, the Eilbeck family from Scotland Island in Pittwater on Sydney's northern beaches.

There was just a moment of uncertainty. Then Pip suddenly realised who it was. She was swept up into Guy Eilbeck's arms as his wife Zoe wiped back tears of joy. The boys, Cam, 13, and Max, 8, got a cuddle and everyone was licked on the face as the miniature sausage dog gorged on a hot dog.

Mrs Eilbeck said, “Oh Pippy darling, hello. She's so tiny. I forgot how little she was. I can't believe I have actually got her back.”

The Herald reported on Sunday how Pip was stranded in North Carolina in March. The family were on a “sea change” around-the-world sailing expedition but had to abandon their yacht and the voyage due to tightening COVID-19 restrictions.

As they flew home, Mrs Eilbeck put out an appeal to dog lovers on social media to look after two-year-old Pip and a series of carers volunteered to help. Those carers in the US were up at 4am local time waiting for the latest news of Pip's Sydney touchdown.

Read the full story and see more pics at the SMH.