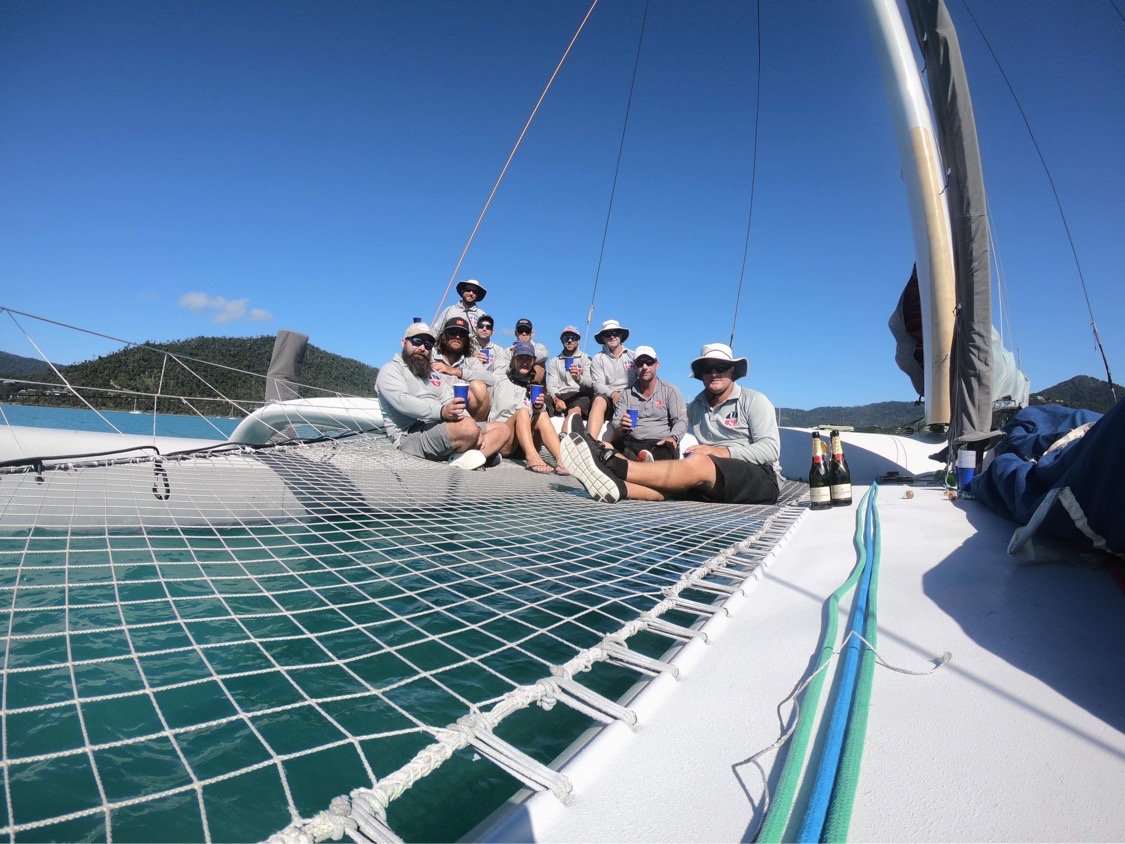 Sixty four boats took part in the 2020 Airlie Beach Race Week Whitsundays Festival of Sailing, hosted by Whitsunday Sailing Club (WSC), which had a difficult job on their hands between the light and fluky conditions and imposing restrictions caused by the CoronaVirus, but the club handled it with aplomb.

Looking light on for breeze again today, Race Director, Ross Chisholm posted an AP ashore waiting for breeze to appear: “I’d like to get the race in, but I won’t compromise the quality of racing to do so,” he said. The AP was lowered at 11.15am and all divisions raced on windward/leeward courses.

“Due to the light air again today, we had to send the fleet on shortened courses on the Bay again,” Chisholm explained.

Following a week of close racing between the Dale Mitchell skippered ORMA 60 and Michel Van Der Zwaard’s Extreme 40, Back in Black, ORMA 60 finished on top by winning the final race of the series. She only arrived in Australia recently.

The two crossed swords all week and finished on equal points after Back in Black scored second in Race 7 – that’s how close it was. Terry Archer’s G’Nome finished third overall.

“The whole week’s been great,” Mitchell said. “It looked like it was between us and the Extreme, but that sneaky little G’Nome was a real threat. It’s a local boat like us. We know them well; they’re great mates and sailed well. It’s a real credit to the multihull OMR rule – everyone has a shot at winning.

“A couple of races through the middle of the series, we identified that in wind, the Extreme sailed better to her rating. For us, it was best for it to be under 8 knots, rather than have bigger breeze to go and have fun in,” Mitchell conceded.

“We have to thank the owner – the border closures kept him in Sydney. It means a lot to all the crew that he gave us the boat and it was well-prepared. It takes a lot of involvement from all our guys to get us on the water.”

John Williams’ Tyee III from Victoria got the better of Robert Dean’s Cut Snake to take this division out, after the latter had led for most of the week. Cut Snake had it in the bag but scored her worst result of the six-race series today, with an uncharacteristic sixth place. Michael Hayes’ Renaissance took third place.

Bruce Kellerman on Tyee III said, “We’re all as happy as can be – unfortunately Willo (Williams) is stuck in Melbourne. He’ll be sad he’s not here, but happy he’s won. His daughter, Elizabeth and crew regular, Trish Wallace-Smith, are on board. They both live in Queensland.”

Kellerman pondered, “The important last day… We’re lucky they changed the course to windward/leeward’s. The boat’s good around the corners.”

Ray Roberts cleaned up, only beaten twice in the series. Barry Cuneo’s Envy Scooters finally got the better of Team Hollywood, a Botin 40. The TP52 won Race 6, while the Sydney boat settled for second to win overall. Desperado, Graham Sherring’s little Atkinson 25, took on the grand prix boats and finished third overall with a third place today backing up its win of Wednesday.

Ray Roberts: “It was a very short course today and easy to get tangled up. Good racing and good Envy got a win at the end of the regatta – they tried hard all week. It was good competition with them. They were a boat we could target, and they kept us focussed. I think what happened to help us against the TP52 is the water was flat. Had it been choppy, they would have been better.”

Damian Suckling’s Top Gear held a half point lead over the hungry Mister Magoo (Goggles) coming into the final day. Could it be any closer? Race 7 decided the series in favour of Mister Magoo, when she finished second, while Top Gear finished third. Lance Vinnell’s 4 Shaw won the race, by far her best result.

Goggles: “It was super close. There was a bit of glitch with the handicaps, but it was sorted out after the lay day; all good. We won by half a point.

“Top Gun was much faster than last year. I’ve been doing this regatta for 15 years, and we make our gains through crew work. It kept us on our toes, especially in light winds, where we usually do well. But we struggled trying to shake him off. The first day was a bit of a lottery, and he got the winning numbers, which helped them.”

At a first regatta for all under Covid 19 rules, Goggles said: “It’s been a fun week. It’s obviously disappointing we can’t get into the Club (WSC), but it’s been a lot cheaper week not buying tickets from the beer tent! Strange times – I reckon next year will be huge at Airlie Beach, we’ll all have some catching up to do…”

Performance Cruising – and the winners are…

In Division 1, Noel Hardy’s Envy was just two points ahead of Daniel Farmer’s B52. The top two scored their worst results today, Envy with a 12th and B52 a 10th, handing the series to Hardy by one point, with Graham Furtado’s Matrix sneaking into second place overall ahead of B52.

“We were aware of each other’s presence on the water…” said Angela van Daal, choosing her words carefully when asked if there was any ‘hunting’ going on between Envy and B52 today. “We’re both from Southport Yacht Club, we know the B52 crew well.

“It was a wonderful regatta and we are so glad they went ahead with it – everyone here feels the same way.”

Division 2 was decided in the last race. After winning yesterday’s Race 5, Mark Beale’s Crossbow was top dog, with Daniel McSweeney’s Brigus in second and Craig Piccinelli’s Wobbly Boot third- all on 23 points each.

“One second place saved the day! It was a lovely day,” Lewis said. We had a terrible day yesterday with mistakes. Wind came when we weren’t there and we didn’t sail well. All the boats were close, so that’s pretty good handicapping. It’s also a game where seconds count, and you don’t give up.”

QMS, owned by John Galloway, led into Race 6 from local hero, Peter Harrison’s Awesome, which has won at Race Week in the past. Michael McCarthy’s Sunrise was perched in third; four points separating the trio. Galloway prevailed, with Sunrise second and Awesome third overall.

This was a battle start to finish, but after retiring from Race 4 for sailing the wrong course and losing a win and the division’s top place, Leon Weaver was determined to make amends with Jakal. Leading into the final race, he had reclaimed the top spot on the leaderboard.

However, Ian Vonk’s Revival, which had replaced Jakal at the top of the board after Race 4, was sitting second and equal points with Jakal. Early series leader, Lunasea (Thomas Jordon) was in third, a point away.

So who got there in the end…. Revival did. She won the final race to beat Jakal by three points after the latter finished fourth in Race 6.

“It was very close all the way with Jakal. The windward/leewards suited us and our crew work was up to scratch. This is our first time here, so we had no expectations. We’ll definitely be back next year.”

On the week of racing, Ross Chisholm said, “Given the sailing conditions we’ve had thrown at us this week, we’re happy to get in all the racing we have.

“Because of travel restrictions, we are missing a lot of our experienced race officials and volunteers. Their replacements are learning as they go. They’ve done everything correctly, so it’s worked out well and improves our scope of volunteers for the future.

“I’ve been receiving comments from competitors, all positive, saying how well Airlie Beach Race Week has been handled. They’ve liked the courses, even the first day, which was quite challenging. Whitsunday Sailing Club, as a whole, is happy we could provide a regatta for competitors.”