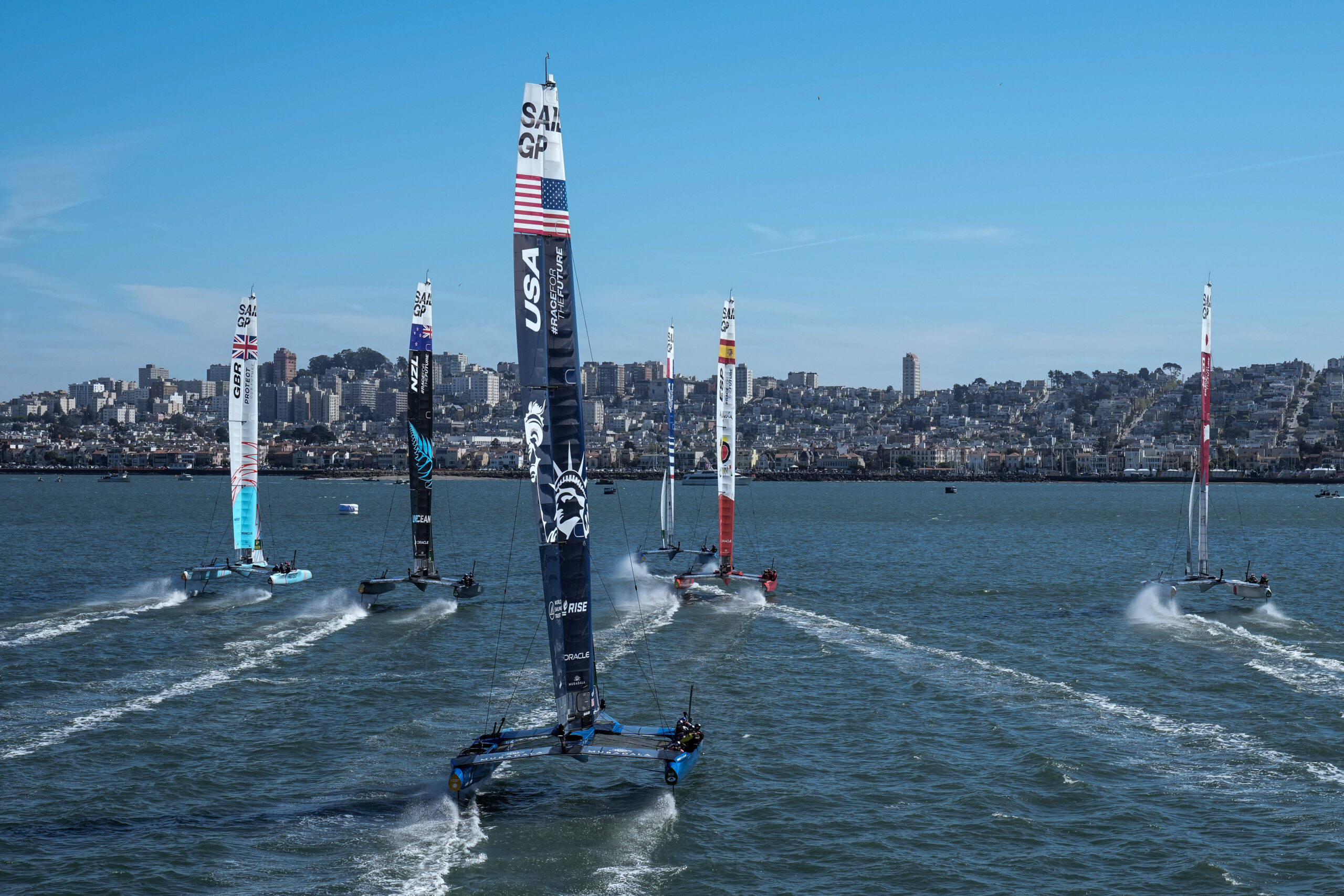 Racing has not been straightforward - SailGP pic

Teams are pushing themselves to the limit ahead of the Mubadala United States Sail Grand Prix in San Francisco, with two of the three grand finalists capsizing on San Francisco Bay during training.

Overall leader and reigning champion, Tom Slingsby’s Australia team, was the latest F50 to overturn on the bay last night. It followed a dramatic capsize by the U.S. team earlier in the week, as driver Jimmy Spithill aims to claim his first SailGP title.

Taking place on a race course between the Golden Gate Bridge and Alcatraz, five races will be contested across Saturday and Sunday before the winner-takes-all, season-deciding final race where the overall season champion will be crowned.

Australia and the United States are guaranteed a place in Sunday’s Season 2 SailGP Grand Final and the chance to win the ultimate bragging rights and a cool $1 million, with the third place in the final likely to go – barring catastrophe – to Nathan Outteridge’s Japan team.

While they might be out of the running for the final, there’s still plenty of incentive for the other teams – Denmark, France, Great Britain, Spain and New Zealand – to finish the season on a high and a cut of the increased $300,000 event prize money available for the top three placed teams.

When it comes to the Championship Final Race, Spithill appears determined to try to get inside the heads of his rivals, targeting them both in the official pre-race press conference.

Spithill said: “If you are looking at it, Tom is the defending champion, Nathan was also in the Season 1 final, and to be honest, Nathan had the million dollars in his hands, but it slipped through and Tom got past.

“Those two have also done more time in these boats than anybody else. I believe we are the underdog, but the rest of us are catching up with Tom. We’ve all learnt things from the data. We haven’t caught up yet, but we are bridging that gap. Tom won’t be out there today, so that is another opportunity for me, Nathan and the rest of the fleet to bridge that gap.”

Slingsby said: “We had a tough day yesterday, but every day we go out, we are pushing. It was unfortunate timing, as we missed practice. It’s also good timing in another way, as it didn’t happen today and therefore, we don’t miss the racing on Saturday.

“The boat has pretty extensive damage with about 80 to 90 percent of that to the wing. I put in a request to get a sail today, but also told the tech team that I put us in this mess, so I am at their mercy.”

There was also a new face on the press conference stage in San Francisco, as Jordi Xammar is set to make his debut in the driving seat for Spain this weekend, following the dramatic pre-race departure of Phil Robertson from the team.

Robertson had been training Xammar for the role, ahead of his move to drive for Canada next season, but internal drama during the final week of the season meant the New Zealander leave his post early.

Xammar said: “To be honest, we are very thankful to Phil. What he has done for the Spanish team is really good. At the same time, in SailGP as a team, we want to beat these guys and need to do what’s right for the team.

“I can’t believe I’m sitting up here, not too long ago I was running behind these guys asking for pictures in Bermuda, but now we are here. We are doing 200 percent to take this opportunity. And, for Spain, this is a big moment, as it’s the first time a full Spanish team will be racing in SailGP.”

Alongside the SailGP Season 2 Champion, for the first time ever, a second podium will take place on Sunday to crown the Impact League winner – the league’s second podium for the planet.

SailGP’s Impact League is a world-first, integrated initiative to make sustainability essential to the fabric of the sport and accelerate the transition to clean energy. Currently Peter Burling and Blair Tuke’s New Zealand lead the charge from Great Britain and Australia.

Fitting for San Francisco, in the final event of the season there will be a new technological innovation integrated into the award-winning global broadcast production. For the first time, the team’s coaches will be able to communicate live with the drivers during racing. This could make a crucial difference, and enable them to pass on critical tactical information, weather, data or insights to the drivers.

In the lead-up to race weekend, SailGP also announced a multi-year, global partnership with Near, a leading carbon-neutral, community-driven blockchain development platform.

This first-of-its-kind partnership will enable fans and cryptocurrency enthusiasts to engage and access their favorite teams, athletes and events like never before. As part of the partnership, SailGP will explore the sale of a new team to a DAO launched on the Near Protocol – a unique community engagement and activation platform in professional sports. Read more about it here.

On land, spectator tickets are sold out. However, standing room viewing is available to the public free of charge at Marina Green. Limited tickets remain for SailGP’s on-water experiences. Racing begins at 2 pm on Saturday and Sunday.

For those not able to get to the Bay, the action can be watched in the U.S. live on YouTube on Saturday and via CBS Sports Network both days (live on Sunday). Worldwide, the action is available in over 186 territories, visit SailGP.com/Watch for details on how to watch where you are.