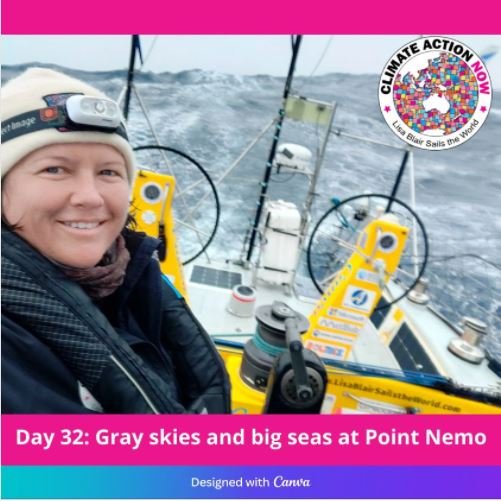 In her latest blog post, Blair, who has now sailed 6000 nautical miles, enjoys some much needed sleep as she ponders Murphy’s Law and being in the furthest place on earth from land.

Sleep oh glorious sleep, I found you… Yes, it’s true, I managed a halfway decent sleep last night, or should I say today and I am just so excited about it, as I tried once again to get to bed early and that wasn’t happening, so I ended up getting to bed about 4am.

By this time, I simply couldn’t keep my eyes open after the all-nighter the day before, with only 1.5 hours sleep, I was shattered. I had shaken out the reef to the second reef and I still had the storm Jib up, so while the winds were still anywhere from 15 knots to 30 knots, I was happy to get some sleep. I managed to sleep in until 9.30 before I got up and sorted a few things around the boat.

I stayed up for two hours watching the winds while I made some breakfast and potted about, and in the whole of that two hours, I didn’t once see winds over 25 knots, so I deemed it safe enough to shake the second reef out and hoist the mainsail up to the first reef.

I scrambled on deck and there was still a rather large swell around, so we have been still rolling all over the place. It was also this dreary foggy grey morning with a light rain that was annoying enough to make you need your wet weather gear without being so annoying that you really felt you needed it…

I set about and shaking out the mainsail before deciding that with winds below 25 knots this whole time that I would be able to put the No 2 jib out as well. I started to unfurl it and Murphy’s Law had to happen.

Before I had even got half the sail out, we were starting to get 30 knot winds building to 35 knots. You must remember, that’s roughly equal to 50 knots of wind in a warmer climate because the air here is so much denser (wet). So, with the winds hitting at 30 knots, I definitely had too much sail up and immediately (while grumbling to myself) started to furl away the No 2 jib.

We were rounding up at this stage and overpowered by the wind. I ummed and ahhed about the need to put the second reef back in but my mind was rebelling, I just didn’t want to do it. I had only just shaken it out. I decided that I would give it 10 minutes and if the winds were still high then I would shorten the sails once again.

The winds eased off a bit and we stopped getting overpowered and I was able to keep the first reef in the mainsail….Yahoo! I did not go to the No 2 Jib as I didn’t want to jinx it.

Afterwards, I managed to go to bed, and with sleeping still being a major priority, I spent the remainder of the day in it. I didn’t crawl out of my sleeping bag until 6pm which secured me another four hours sleep. Woop. Not nearly enough to have caught up on the missing sleep, but still something, and I feel worlds better for it.

It is a virtual waypoint in the ocean that is mathematically the furthest place on Earth from Land. In any direction you are more than 1600 nautical miles from the nearest land mass and that land is a 30nm uninhabited island.

It means that I end up closer to the Astronauts space station than to any person on any piece of land anywhere in the world… It’s quite mind boggling as to how far from anything and everything I really am… So, point nemo is located at Latitude – 48 52.60S and Longitude 123 23.60W. I just passed below it officially at 0230 local time of UTC-9.

And while I am in the most remote part of the planet, I want to do a huge shout out to Canva for their support. With my satellite internet connection supplied by Pivotel, I have been able to access and use the Canva platform to share my story with you all and to make it in a visually attractive way.

One of the best things about being partnered with Canva is that they live and breathe their motto of ‘be a force for good’. They were right aboard to support the science taking place for this trip. I am incredibly grateful for their support and pleased to say that I have now collected over 60 micro plastic samples and the unit is still going strong.

It was always critical to get data from Point Nemo as there is very little in existence due to the shear remoteness of the location. Sadly, there is human impact even all the way out here. When the yachts in The Ocean Race completed the 2017 racecourse around the world, they took with them the same sampling unit that I have today (I actually rented mine from them).

Using the micro plastic sampler, they found 9-26 micro plastic particles per cubic metre (data released May 2017). This was the first ever sampling of micro plastic to take place around Point Nemo, and to my knowledge, my samples will be the second. It will hopefully give us further supporting data, but the fact that plastic was found in the most remote place on earth just goes to show how big of a problem it is.

Remember, we can all make choices and changes in our daily lives to minimise plastic use or be responsible for correctly recycling it.

I also wanted to let you know (while on the topic of recycling) that I was lucky enough to partner up with Oceanum Vela and Nauti-Bags, and together we recycled some of my old sails from my 2017 Antarctica Record into some very attractive Clutch, Tote and Kit Bags.

If you want a fun way to support me, or have your own momento of the trip, they are now available for purchase on my website, along with the Merino Wool signature beanies that I have been living in.

Conditions at the moment have increased, so I put the second reef back in and I am now more in the 30 knots range winds with blowing in from the SW to WSW along with an easy 5 metre swell, which is starting to knock us around again.

Looking at the forecast, it looks like I am going to be in these conditions for the next few days at least. Now that I have passed the milestone of Point Nemo, the next major challenge is going to be Cape Horn, just under 2 000 nm away. We have now sailed over 6000 nm on this trip and so I am well on the way.

Before I go, I want to take a moment to thank tonight’s degree sponsor, 123 West – Women Who Sail Australia – Thanks to all the amazing women who donated to buy a degree, I really appreciate it. For all the female sailors and boaters out there the Women Who Sail Australia and is a great community of boating women where you can ask any questions and find support with the occasional gatherings.

Goodnight all and bring on Cape Horn…