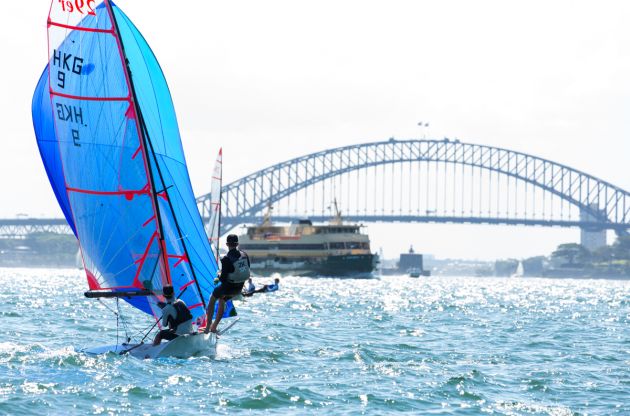 Woollahra Sailing Club has rolled the welcome mat out for more than 400 competitors representing 11 nations at the annual Sail Sydney regatta, Thursday 17to Sunday 20 December, 2015.

Korea’s youth team of 13 sailors are spread over the Laser Men’s, Laser Radial and RS:X windsurfer fleets. Youth national team coach Song Myungkeun has been in Sydney for two weeks and says in his best English, “I come 14 days ago we look at Opera House and city…very beautiful. Everyday good wind. We are youth team; Korean sailing team is back home training for Olympics.”

Scott Sydney, representing the host club, has taken command of the outstanding Laser Standard men’s fleet and Italy’s Giovanni Coccoluto is second with the same points as the early local leader.  Given home is in the depths of winter the Italian is pretty happy with himself for arranging a summer “down under tour”, including the Sailing World Cup Melbourne and Sail Sydney, as he chases an outside opening for 2016 Rio Olympics selection.

“The Olympics are still open but another guy sailing for Italy is at the Rio test event and if he’s top in that regatta they will stop the selection,” Coccoluto said after racing. “If not there are Europeans and worlds to come; there is still a chance. It’s my first time in Australia; I’m really enjoying it.”

West Australian 29er pair of Annabelle Davies and Hayley Clark are familiarising themselves with Sydney Harbour prior to the Australian Youth Championships WSC is hosting January 10-14, 2016.

“It’s much choppier here compared to where we sail out of Royal Freshwater Bay Yacht Club in Perth,” said Clark. “We aren’t used to cruise ships or Manly Ferries and there’s much more land everywhere, which influences the breeze.”

“We learnt a lot today and will come back tomorrow with a new head space,” Davies added.

The rest of the annual series that was established in 1994 to serve as a training regatta for the 2000 Sydney Olympic Games is expected to be under the influence of a lingering high pressure system over the Tasman Sea which is extending a ridge towards the NSW coast. Stronger winds, 15 knots possibly as high as 25 are forecast for tomorrow when the Optimist fleets join the on-water program.

A number of high profile Sydney Hobart line honours contenders were out training on the harbour today, the likes of Comanche, Ragamuffin 100 and Maserati dwarfing the tiny one and two person dinghies and skiffs.

Progressive pointscores for all divisions racing at Sail Sydney are available here.

Sydney’s waterfront suburb of Rose Bay was slammed by yesterday’s freak tornado that hit the city’s southern parts and WSC club staff and officials worked late into the evening to have the premises ready for the early morning arrival of cars, trailers and competitors.

The NSW Government through Transport for NSW is Sail Sydney’s safety partner and supporters Nautilus Marine, Gill Lejen Marine and NBsailsports have made generous contributions to the successful staging of the Yachting NSW event.