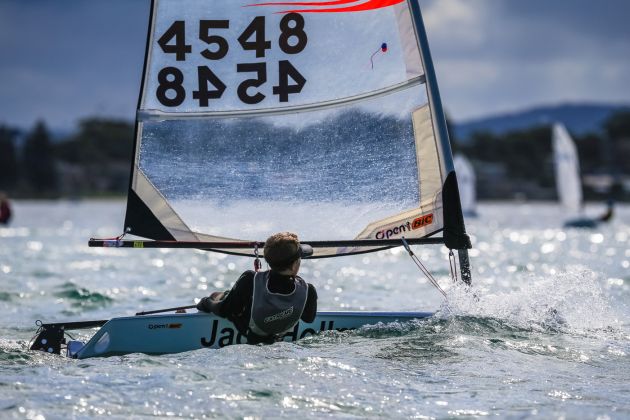 Two junior off the beach classes completed their two-day series on Thursday April 14 as part of Sail Port Stephens, the final event of a long summer season that has taken many young sailors interstate and some overseas to compete.

On the series Jack said, “It was a really good, lovely flat water. It’s not as serious as some but every regatta you treat as if it’s a championship. Day one was pretty shifty with the rain squalls; there were 180 degree shifts!”

The past season he’s been busy on the Optimist circuit, including finishing sixth overall at the New Zealand Optimist nationals. At the end of June Jack is off to Portugal for the class’ world championship where up to 300 entries are normal.

Optimists provide a clear pathway to Olympic classes and the talented teenager from Northbridge Sailing Club in Sydney is tracking well. At 13 Jack is at the upper end of the class’ ideal size and weight range, and has a clear plan for where he’ll go when he outgrows the dinghy. “I’m going to do the South Australian Optimist states next January and maybe another nationals, then I’m looking at two or three years of sailing a 420 then hopefully a 29er, and then a 49er.”

Young Jack is closely following the progress of Australian’s world number one 470 pairing, Mat Belcher and Will Ryan, as they prepare for the Rio Olympic Games in August. “I’ve been watching them closely and I’ll be watching how they go at the Olympics,” he assures.

Second in the Optimist division, Oliver Gordon, is not long back from a snapped ACL playing soccer and a year off. “It was quite a light regatta but the racing was good and the club did a great job of hosting us,” Gordon praised. His RPAYC coach Traks Gordon said in Oliver’s situation, soccer cost way more than sailing.

Oliver’s next big regatta is Queensland Youth Week in July and then following his Olympic hero Jason Waterhouse in the Nacra 17 at the Rio Games in August. Gordon’s long term goal is also to reach the pinnacle by one day qualifying to represent his country at the Olympics in sailing.

Rhys Schultz declared yesterday’s Open Bic division win the highlight of his summer. From Sail Port Stephens it’s back to more regular school holiday activities for Rhys and the rest of the PSASC juniors who were part of the Junior off-the-beach Series supported by Port Stephens Strata and Gill Australia.

The second phase of Sail Port Stephens, the Port Stephens Trophy including the NSW IRC title, is underway around the bay and offshore, all fleets enjoying strengthening nor’easters on a stunning autumn afternoon.

Sail Port Stephens is proudly supported by the NSW Government through its tourism and major events agency, Destination NSW, and Pantaenius’ major sponsorship continues for the third year.