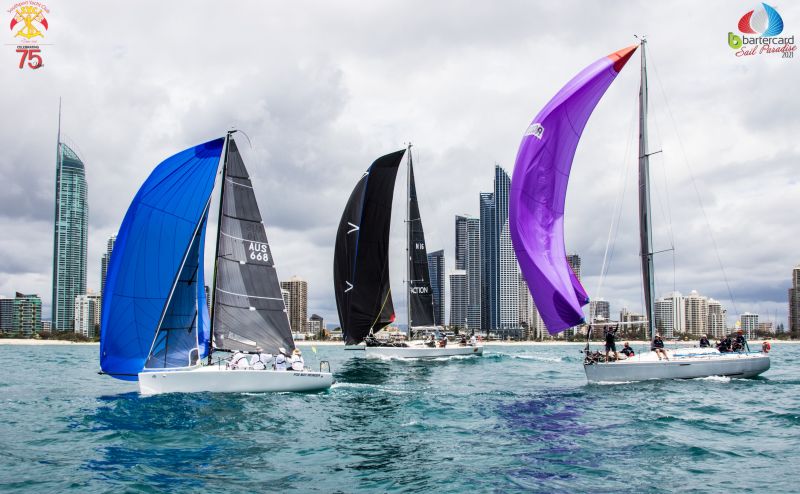 The 12th Bartercard Sail Paradise Regatta got underway today with a record fleet of fifty-six yachts ranging in size from 70ft to 12ft today with a steady 10 knots North East breeze fanning across the course.

The Race Officer, Southport Yacht Club’s Mark Dingley, opted to start the first division of 16 IRC boats on a course from the Seaway down to Burleigh Heads and back, while the yachts in the smaller division sailed a shorter course to the south and back.

The light breeze made for challenging sailing for all crews aboard yachts large and small. They were continually trimming the sails to keep their yachts at maximum speed.

Spectators on the shore were treated to the sight of the entire fleet rounding a course marker just beyond the surfline due east of the Q1 building.

When the fleet returned to the Southport Yacht Club, having completed the testing course, Vice Commodore Drew Jones declared Day One of the series a great success.

“It has been a fantastic start to the series as we saw the largest fleet in the 12-year history of Bartercard Sail Paradise. There are already signs that this series will go down to the wire. We probably won’t know the division winners and overall champion until the very end of the series.”

There was an impressive result in the Para Sailing division as the all-girl crew dominated their opposition and took top honours for the first time since they became a team.

The second day of racing will see the fleet starting on coastal courses at 10am.