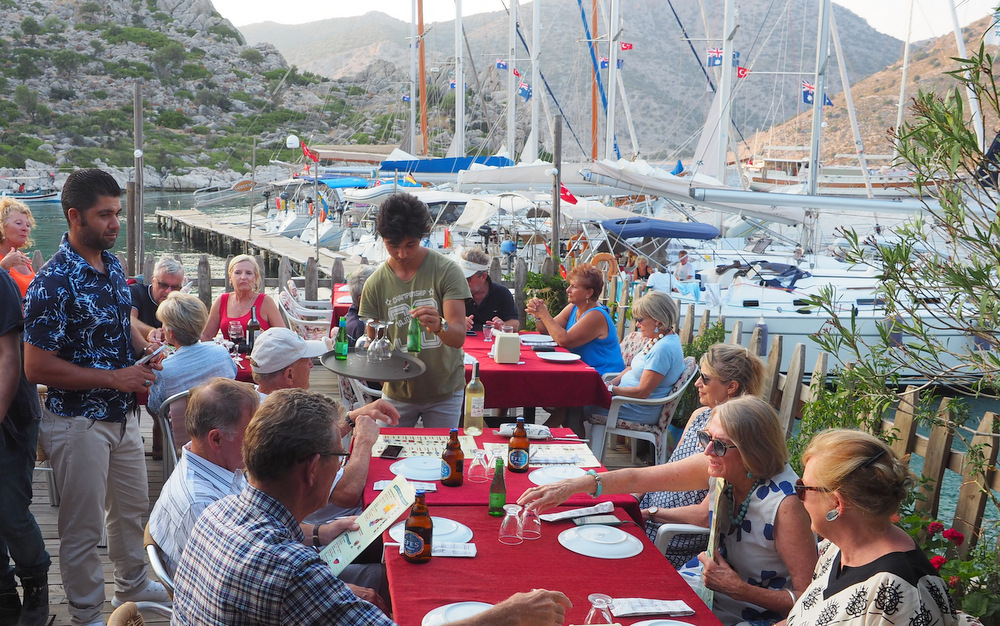 Over the years, some 5000 boaties have enjoyed the holiday experience of a lifetime – a yacht rally in the Mediterranean with Mariner Boating Holidays. So much so that three-quarters of them have been on more than one rally, and keep going back for more. Here's just a few reasons why sailing the Med in a flotilla is such an addictive joy.

Sailing in company on a flotilla of yachts has a social dimension that cannot be quantified and sailing in company on a Mariner Rally has the added benefit of access to local knowledge 24/7 – the best restaurants, the best anchorages, advice on where to go, who to see and how much to pay, plus many more fringe benefits.

The well-tested Mariner formula is semi-structured, with sailing days between ports interspersed with lay days where everyone has time to smell the roses. Life is much easier for the skipper because he or she only has to orchestrate consensus among his or her crew on the lay days rather than on every day. The skipper doesn’t have to worry about the boat either as any technical issue will be sorted by the technician who travels 24/7 with the rally on the “committee boat”.

Sailing passages are generally limited to 20 nautical miles in any day, with lunch and a swim stop during the day to wait for the breeze that usually powers a short race to the final destination for the day.

Mariner races use a novel handicapping system where each result is corrected to the performance of the winner of each race, with each revised handicap supposedly producing a dead heat on corrected time in each following race. Mysteriously, it never does, but there have been many rallies where the final handicap result has not been decided until the last race in the series.

Dinner and the results always follow each day on the sea. The racing is not serious, although on one occasion there was actually a protest, which was heard over well lubricated dinner in a restaurant in Croatia. After the hearing the judge, a Scot, gave his deliberation in Gaelic; no-one understood a word and the protest was dismissed. Well at least we thought it was Gaelic!

Glowing comments about restaurants and food experiences have proliferated over the years. The distillation of the restaurant list for each destination has led to the Mariner team sourcing many restaurants that individuals may never have otherwise stumbled upon. The usual long table set up for a Mariner dinner, with crews sitting next to each other rather than across from each other, has led to friendships that have endured the 20 years Mariner has been running these rallies.

A rally package is more expensive than the straight bareboat charter of a yacht but the rally package is very inclusive and no-one has ever complained about the price after the event. Proof of the pudding is that 75% of Mariner’s guests are repeaters and many have enjoyed multiple rallies.

Another important feature of most Mariner Rallies is that the route is one way between the start and finish port. Total straight line mileage in a rally itinerary is typically 150 miles, mostly off the breeze or down-wind but rarely uphill. The net result is a doubled range in the same time with maybe two-three hours sailing in an average day.

The object of Mariner itinerary planning is to stop two nights in each port with a full day for people to properly explore the port town and/or the hinterland. Many of the chosen ports are full of charm and history yet far off the usual tourist paths.

Yachts are free to move on lay days, but over the years the pattern very clearly has emerged where no-one moves if the committee boat stays in port! “I’ll do what you plan to do” is the common call. Optional excursions are sometimes arranged which folks join or leave as they choose.

Discussion about time raises a common question about “bang for your buck” but the real experience has to do with how much time you stand still rather than how much time you spend on the go. The Mediterranean sailing experience really needs two weeks, because a bareboat charter week, although seven nights, is really only six days. You no sooner get settled on board and it’s time to turn for home and get ready for disembarkation.

The strong feature of the rally concept is that it’s like having a tour bus cut into pieces that can move independently if desired. It is a group movement and there are compromises, but for 5,000 people over the years it seems it’s a compromise that works.

2020 will see rallies among the idyllic islands of Greece and Turkey, on the French Riviera, in Croatia through the Kornati Islands group, along the Amalfi Coast in Italy around the island of Majorca in Spain and along the Lycian Coast of Turkey.
For more information and to book your rally experience visit Mariner Boating Holidays or call 02 99661244.