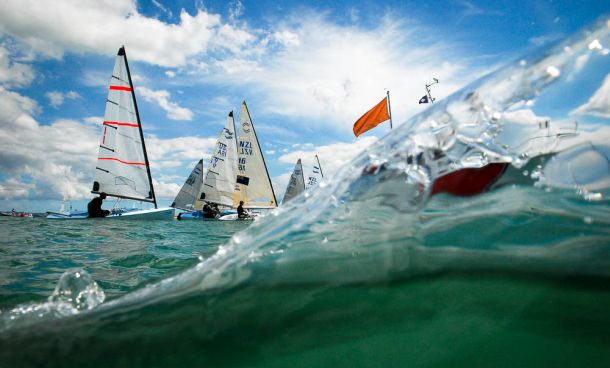 Day one of Oceanbridge Sail Auckland got off to a slow start due to a lack of wind – with all fleets forced to wait two hours with the postponement flag hoisted up the official flagpole.

Hosted by Royal Akarana Yacht Club on Auckland’s Okahu Bay, Oceanbridge Sail Auckland is the largest Olympic, Paralympic and invited classes regatta in New Zealand. This year over 200 boats spread across the classes are racing for the titles.

Once the fleets finally launched at 1300 hours and the conditions looked to have stabilised, news came in that top 49er sailor Peter Burling (NZL) had been announced as one of two helmsmen of Americas Cup team Emirates Team New Zealand. But it was business as usual for Peter Burling and Blair Tuke, who are true professionals in every sense of the word.

“We had a good day today with a 1, 2 and 1 so pretty happy to start the regatta on a positive note,” said Burling.

“I didn’t do particularly well today especially in my first race.   Hopeful that tomorrow is better!” said Meech.

Saunders had a bit of a chuckle when asked about his day. “My day was interesting but it’s going to be better tomorrow so come and talk to me then!” laughed Saunders.

Although their days were tough, their mindset was still focused on the overall result.

Sara Winther (NZL) had a great first day with a win in the race one.  The second race was abandoned due to a rather dramatic wind shift.  At the time race officials called that race off, Winther was in second.

“I’m happy with today but we still have a long way to go,” said Winther.  “It was close between myself and Scott Leith so I have to continue to stay focused!”  Leith (NZL) finished second in the  race that was completed.

Josh Junior (NZL) was in fine form with a win in the first race of the day. When asked how he went today, Junior was blunt and to the point. “Good,” said Junior.  “I found my way around the course which is always a good thing!

Andrew Murdoch (NZL) said he battled on the racecourse today. “This is the first time I have raced in a while so I’m just getting back into the swing of things.  I’m definitely looking forward to having a better day tomorrow,” said Murdoch.

Jake Lilley (AUS) didn’t have the best day either noting that he had a few things to work on for better results tomorrow. “I’ve got plenty to work on for tomorrow!” laughed Lilley.

“We are happy with our first two races but made a few mistakes in the last race. Tomorrow’s aim is to minimize those mistakes!” said Maloney.

Gemma Jones and Jason Saunders (NZL) racing in the Nacra 17 looked tired when they returned to shore at Okahu Bay this afternoon.

“It was a shame about the wind as it was quite shifty and that made it hard to get a course laid and get the racing away, but they still did it and we got three races away,” said Jones. “We had a 1, 2 and 1 so that’s a good way to start the regatta.”

Tim Dempsey and Gemma Fletcher had a great first day of the regatta with three ‘bullets’ in the SKUD18 class.

“We are stoked!” said Dempsey.  “Very pleased with our efforts today.”

“It’s still only day one so we need to keep concentrating but yes, we had a good day,” said Fletcher.

The Jury will have one protest and two requests for redress to hear before results in the RS:X 8.5 and 420 classes can be finalised.

Jury Chairperson Peter Johnson (GBR) said that it was challenging day for everyone on the water. “The Race Officers had their work cut out for them but handled all situations magnificently.  They have a tough job that’s for sure!” said Johnson.

Racing is scheduled to recommence on Friday 27 February at 1100 hours, providing the breeze decides to visit the race courses.

This regatta is made possible only thanks to the contributions from principal sponsor Oceanbridge and supporters Danske Mobler, Yachting New Zealand, Sport New Zealand, Pump Water, Zhik, The Landing, Orakei Marina and most importantly, a team of more than 80 volunteers.

Peter Burling on his selection as ETNZ co-helm: