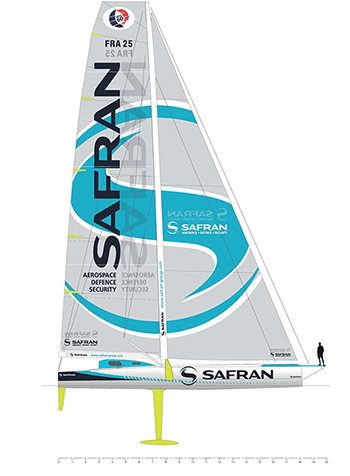 A week before the launch of its new monohull, Safran is unveiling the colours of its latest generation IMOCA. The grey and turquoise Safran will be launched on March 4 and christened on Saturday, March 7 in Lorient.

The new monohull, Safran, the Safran Group's flagship, skippered by Morgan Lagravière, will participate in the greatest events in offshore racing, with the focus on the 2016 Vendée Globe. The choice of the livery of the boat is an important step. “We wanted to mark the change from the previous Safran; we are beginning a new adventure with Morgan Lagravière,” Christine Orfila, Safran’s director of brand and marketing, said. With a metallic grey base, evoking the high-tech credentials of Safran, the orange of the old monohull has been replaced by turquoise. The appendages are a fluorescent lime green. “We entrusted the livery to Isabelle Keller,” Orfila said. “She worked on the sails of the previous boat and we liked her proposals for the new project. We’ve kept to the principle of the previous design of the sails, which beautifully showcase our brand. In addition, with the turquoise, the boat will be highly visible on the water on a cloudy day.”

“Fun” colours in the image of its skipper

Fully involved in the construction of the boat, Morgan Lagravière also participated in the choice of the livery and clearly the young skipper is satisfied with the result: “I like it a lot,” Lagravière enthused. “From the start, I wanted clear and bright colours. Turquoise makes the project more “fun”. It will cheer me up while I’m sailing on the southern seas. For the sails, I wanted bright colours to make it easier to check the settings at night.” As well as the technical aspects related to performance, the branding of a boat is also its identity. It stresses or softens its form. “On the hull, the” midnight blue” line accentuates the bilges and we added the turquoise on top to make the hull warmer,” the designer, Isabelle Keller, said. “With the metallic grey, there will also be nice effects of light between the sky and the sea.”

To see the life-size result, we must wait a little…See you on Wednesday, March 4 for the launch of the boat at the Keroman submarine base in Lorient. Safran will then be christened in Lorient on Saturday, March 7 at 1300hrs (French time).