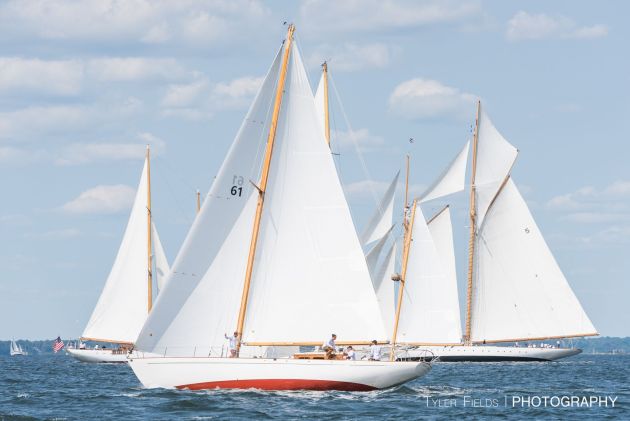 AUGUST 27, 2017 – Newport, Rhode Island –The 38th Annual Panerai Newport Classic Yacht Regatta presented by IYRS concluded in Newport today with R-Class Ruweida V, restored by IYRS students, as the overall winner. In addition, the winners of the North American Panerai Classic Yacht Challenge went to S&S Sonny in the Vintage Division and 12-Meter Valiant in the Grand Prix Division. The Challenge is comprised of five regattas throughout August with the Newport Classic Yacht Regatta as the final event.

The Panerai Newport Classic Yacht Regatta is a two-day regatta of classic yachts, and the importance of the craft associated with their restoration. Yesterday, for the first time, the 2017 event commenced in Bristol, Rhode Island with an 11.1 nautical mile distance race to Newport. 12-Meter Columbia was first across the line and first overall on corrected time.

Joe Huber, owner of Ruweida said, “This is terrific, it’s a really good night. We’ve been sailing Ruweida for the last six years and constantly improving; so we’re really happy with the results from this regatta here at IYRS.”

Following two days of racing on Narragansett Bay, teams and their crews celebrated the final event in the Panerai North American Classic Yacht Challenge where the top performers in each class were recognized. In addition to the Class Awards, Kid, owned by David Snediker was awarded the Tom Benson Restoration Award; the Clingstone Cannon for best Corinthian Spirit was awarded to Fred Roy, owner of the S Boat Surprise; and the Race Committee aboard Carina II (a classic motor yacht) was recognized for best costumes in the yacht parade.