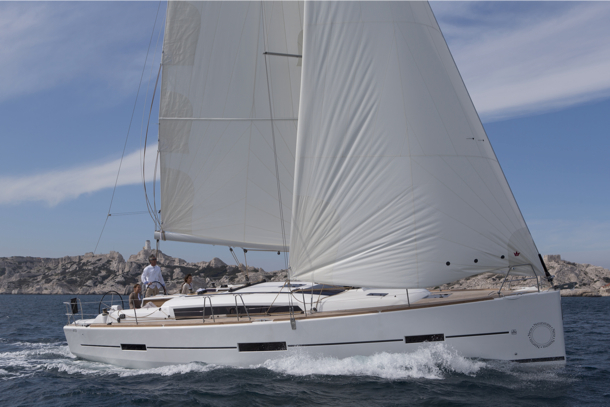 Throughout the last sailing season I was racing on a Sydney 38, Whisper, in the women's twilight series at Royal Prince Alfred Yacht Club on Pittwater. While there were a number of attractive boats in our fleet including John Bacon's Dark Star, Iain Murray's Bellisimo and Peter Hrones' Rogue, there was one boat in division two that caught my eye, Ruby.

Unfortunately Whisper was unable to sail the last race and when I was offered a spot on Ruby not even the weather could stop me. It was not the ideal day to race a boat like the Dufour 410; we had rain squalls and little to no wind. But with Katie Spithill on tactics we were in good hands.

Dufour yachts was established in France back in 1964 and builds a range of yachts, including cruiser/racers and the more cruising focused yachts, designed by the Felci Group. The yachts are built using modern and durable materials with a warm interior and lighting for maximum comfort on board. They also value an attention to detail. All their yachts are built in their La Rochelle, France shipyard and the company ensures each model is a solid construction with a clean finish.

The 410 is part of the Grand'Large range and has a clear focus on optimising space and functionality. This is evident in the layout. There is an abundance of space down below and the deck has a spacious cockpit with wide sidedecks. There is plenty of room to move the boat around and it is easy for a short-handed crew to control the yacht.

When I first jumped on board I had a good feeling about this boat. I went down below and the first thing I noticed was the natural light that floods in. We had covers on the deck windows yet there was this abundance of light. And with port holes both above and below deck line, it didn't matter if you were standing or seated you could see out, or see the television on the forward bulkhead.

The navigation table is set to starboard and is fully functional. When not in use it converts into an adjustable sofa that could easily seat three people. The settee to port could easily seat eight around a small table. The seating also doubles as extra storage, in the back rests and under seats.

The bench top in the galley is made from Corian and the twin stainless steel sink has a Corian cover, and hot and cold tap. The two-burner stove/oven is on gimbles and has a removable wooden cover and stainless rail. The double fridge/freezer is accessed through the bench top. There is storage under the bench and cubby-holes above the benches. This results in plenty of space for cutlery, crockery and any food. The waste bin is also under the bench.

One of my favourite things on board, and I had heard rumours about it, was the wine cellar. It had to be pointed out to me, and some sails moved, because it was under the floor boards. Unless you knew it was there it would go unnoticed.

The forward cabin is large, with plenty of room to change. Storage includes a hanging locker with shelving and a shoe locker, along with a cubby-hole.

The twin aft cabins also had plenty of light, space and storage in the form of a hanging locker with shelving and double doors. The double bulkhead provides soundproofing from the adjoining engine compartment.

The head was basic with Corian benches, a mirror that doubled as a cabinet, shower and sink with hot and cold water and the standard toilet. There is also a little shelf for your toiletries and towels.

On deck there is plenty of space. The yacht is designed to be comfortably sailed by two people. It has a great racing set-up with the main sheet in the cockpit but it can be led, along with the jib sheet, back to the wheels. The dowsing sock is also a nice option for short-handed sailing.

The teak bench seats provide comfort when cruising and double as storage lockers for ropes, fenders, BBQ and fishing rods. There is also a big locker at the stern for storage of the tender and life-raft. The integrated foot steps make helming a little more comfortable. A bathing platform lowers off the stern with a telescoping ladder attached and a shower is hidden away in the port stern locker.

The cockpit table provides storage and houses a large plotter. The twin wheels are set to the sides, this makes the boat feel even more spacious. Instruments are also situated in front of the wheels.

Forward of the cockpit is clean with all lines leading under deck. For those serious twilight racers like the Ruby crew, the bimini and dodger roll up easily.

The rig is aluminium with two sets of sweeping spreaders, a double backstay and is deck stepped. The boom is also aluminium and is fitted with two continuous reefers.

The sail set up makes rigging and unrigging quick and easy. The furling genoa leads back to the helm. The mainsail falls nicely into the lazy jacks, which do get rolled up for racing. There are a number of options for downwind racing including asymmetric and symmetrical spinnakers and the option to pole-out your head sail. This boat has everything a racer or cruiser needs. As Katie Spithill said, “You name it, we've got it.”

The day we raced was drifting conditions and it did not stop raining. It was not exactly ideal for a heavy boat like the Dufour 410. Katie explained the boat's performance saying, “due to the weight it is a bit sticky downwind.

“But this is a positive in medium to heavy conditions because it carries momentum downwind.”

The boat is easy to steer in all conditions. Spithill said, “It has a good sized rudder based on the size of the rig. It is nicely balanced and we haven't had an issue.”

When we got moving downwind in the less than 5 knots, we were able to carry momentum. If we stopped it took a bit to get her moving again. We found the key to the light air downwind was to do anything to keep her moving.

Upwind is where the 410 shines. Despite the weight she is able to hold her momentum even in the light breeze – despite all the recreational things on board; two gas bottles, BBQ and something close to 20 fishing rods. We were able to hold our position well among some lighter and smaller boats. While it was an enjoyable sail in the light conditions, I can't wait to have another sail on Ruby in some stronger breeze and see what she can really do.

The Dufour 410 is a fantastic cruising boat with so much space yet is able to perform on a racing level. There are so many additional options that can make this boat even more comfortable than the standard option. Vanity mirrors and televisions in the cabins, adjustable seating and so much more. But it may take you a minute to find it all, it’s nicely hidden. You can also transform the owners cabin into a cinema room – if you include some of the added options. What more could you want?

Ruby is now cruising up the east coast of Australia for seven months. They will be stopping at Magnetic Island Race Week to see how she lines up with some other cruiser/racers.

Congratulations to Jennie Fogarty and the crew of Ruby for winning division two of the Ladies Twilight Series at Royal Prince Alfred Yacht Club this year by just one point. Lyndall Bacon took out division one on Dark Star. ✵

The boat test was organised by Jason Antill of Antill Marine based on Pittwater. All custom stainless work was done by Custom Engineering in Mona Vale.