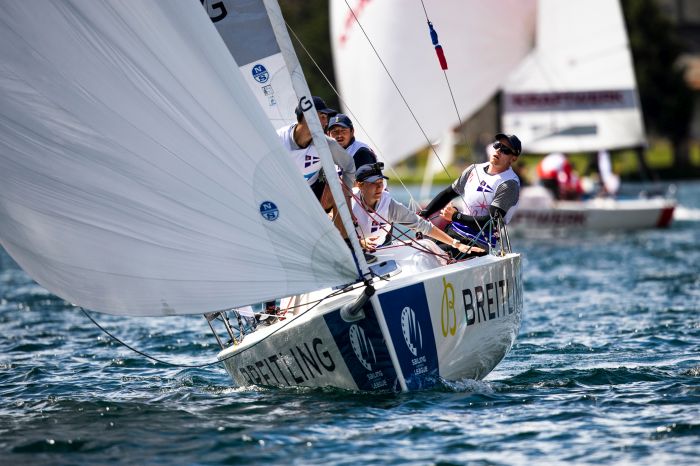 St. Moritz, 18 August 2019 – The Royal Sydney Yacht Squadron turned on the afterburners in a thrilling four-boat showdown to win the Sailing Champions League 2019 on the lake of St. Moritz.

The crew from Sydney was the only non-European team among 24 clubs representing ten nations at the August 15-18 championship, and now the trophy flies out of Europe for the first time, winging its way to Australia.

David Chapman, skipper of the winning team, commented: “We are absolutely stoked. We struggled to get a crew together for this regatta so we nearly didn’t come. But what a great team to have sailing with me: Finn and Charlotte Alexander and Zac Quinlan. I think the other teams didn’t rate us going into the Final, which was just fine. Winning the Oceania Final really put us in good stead. We didn’t make a mistake and the crew were just awesome – you can see that in how hard they hiked.”

Compared with the 51 races of eight-boat heats over the previous days of competition, the four-boat final required a more aggressive approach. No one could match the starting prowess of Chapman and his crew – all with high-level match racing or experience in other small boat classes – who won the first race of the finals and then followed up with an even more dominant display in race two.

“I hope we inspire more teams from Down Under to compete in the Sailing Champions League. It’s such great racing – turn up with your mates and your lifejacket and race in equally-matched, provided boats,” Chapman added. Usually he would be tactician for Ray Roberts’ Team Hollywood at Hamilton Island Race Week, that crew taking out IRC division 2 race 1 just hours before the Australians’ victory in Switzerland.

Much was made by the SCL commentary team of the Alexander siblings’ choice to race barefoot in the cooler mountain climate, Charlotte laughing: “It works, so we’ll keep doing it!”

The Oceania league launched in April 2019 and the dates for the second season were announced recently:

Results by SAP: The SAP Sailing Analytics provide 24/7 additional statistics and data for sailors, fans, spectators and media like GPS tracking, real-time analysis, live leaderboard combined with 2D visualisation. You can look back through the races and find all the results on scl2019-final.sapsailing.com.