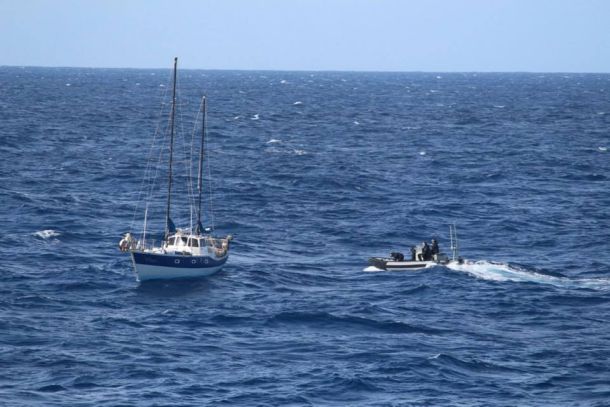 One of TEK's sea boats approaches the yacht. Photo RNZN.

The frigate HMNZS TE KAHA went to the aid of a yacht in the north Tasman Sea. The yacht MAHI was on a voyage out of Brisbane when it got into trouble on Wednesday night with a leak around its rudder stock. TE KAHA—bound for SE Asia—was 180 nautical miles south of the yacht when she received its distress message at 6.30am yesterday and raced to it. TEK’s Seasprite helicopter was launched to locate the yacht. Once the ship arrived, a team of three personnel including an engineer and a medic went to the yacht by sea boat.

CDR Simon Griffiths, TE KAHA Commanding Officer, said: “What was supposed to be a two-week trip for the skipper had turned into five weeks. During that time, the yacht had been both becalmed and battered by storms. The yacht’s two masts were damaged during the storm and it was down to its last set of useable sails. By the time our team got on board, the skipper had run out of food though he managed to get the leak under control.

“Our engineer managed to repair the leak. We also stocked him up with 10 days’ worth of food including military ration packs, fruits, milk and even some Weetbix and Marmite. We also filled his fuel tanks with 80 litres of diesel.”

The ship’s medic also checked the yacht’s skipper. “Despite his recent ordeal, he was in good health and very good spirits. He was extremely grateful for the assistance we gave him and was confident he could now get himself and his yacht back to Brisbane,” CDR Griffiths said.