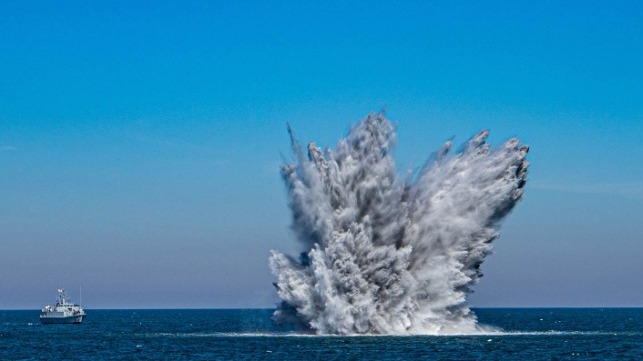 The Royal Navy minehunter HMS Grimsby has completed her spring stint with a NATO task force after a two-week search for wartime ammunition off the French coast.

Eight unexploded bombs and mines from World War II were neutralised by the Faslane-based warship and comrades from five other vessels assigned to NATO’s Mine Countermeasures Group One. The force – currently led by Norway – patrols the waters of Northern Europe, practising to deal with the latest mine threats and conducting concerted exercises focusing on the detritus of 20th Century conflicts.

Both sides of the Channel were heavily mined during World War II, and bombers also frequently ditched their payloads in its waters when they returned from abortive missions. An extensive mine warfare force was assigned to Operation Neptune in the summer of 1944; they found nearly 1,000 mines alone in the first two months of the invasion. Nevertheless around one third of mines were never located during the wartime and post-war clear-up operation.

With the vast bay used by fishermen, ferries, merchant traffic, recreational divers, and underwater oil, gas and communications links, it’s vital the unexploded munitions are removed. The latest HOD – historic ordnance disposal – operation cleared about 26 square miles of seabed off Le Tréport, near Dieppe. An offshore windfarm is planned for the site.

Grimsby joined Belgium’s Bellis, France’s Andromède, the Dutch Willemstad, Norway’s Otra and flagship Donau from Germany. Ninety-four potentially-dangerous objects were located by the sonar systems on the NATO ships. Clearance divers or remotely-controlled submersibles such as Grimsby’s Seafox identified eight of those objects as mines or bombs, resulting in controlled explosions.

“By working closely together also in times of crisis, Mine Countermeasures Group One continues to conduct our operations. By removing historical ordnances from the seabed we keep the sea lines of communication safe for modern seafarers,” said NATO group commander, Norway’s Commander Henning Knudsen-Hauge.

It’s the second hunt for wartime weapons the group has carried out in six weeks. Last month the ships conducted a search of Oslofjord, while last year the NATO force cleared 290 square miles of ocean – an area roughly twice the size of Bristol – of more than 200 mines and other aged munitions.

Last year, the NATO Historic Ordnance Operations Alliance found 2,027 mine-like objects, of which 148 were mines and 63 other pieces of historic ordnance, clearing an area of 220 square nautical miles.