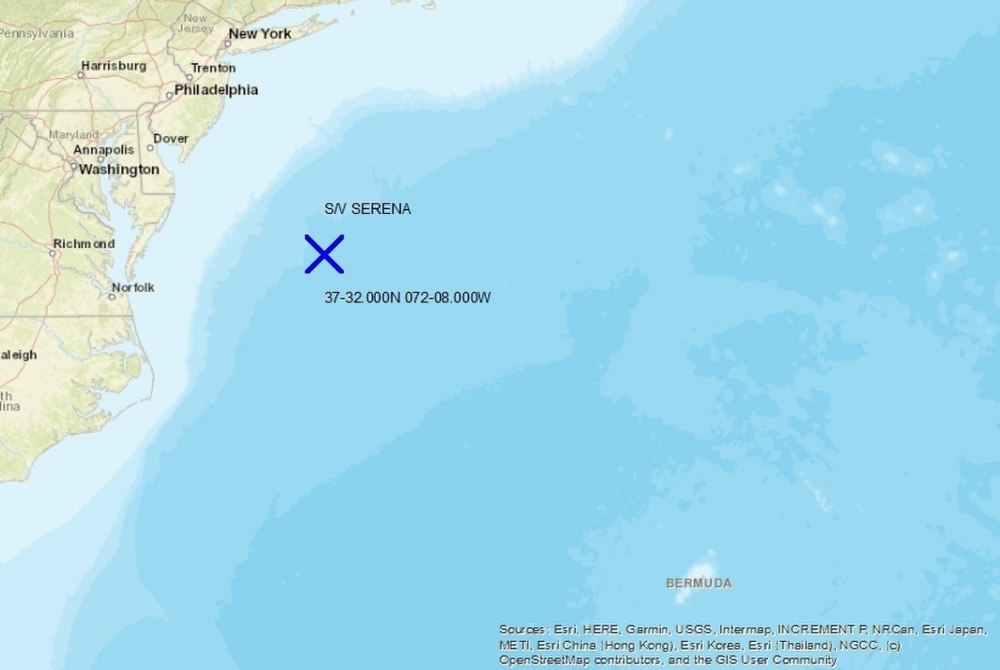 Cape May, N.J. — The Coast Guard rescued a man from a sailboat approximately 200 miles southeast of Cape May, New Jersey, Friday evening.

Watchstanders at Coast Guard Sector Delaware Bay’s command center were notified by a crewmember on the tanker vessel Hellas Poseidon at 5:15 p.m., via satellite phone, that they overheard a distress call on VHF-FM radio channel 16. After seeing black smoke approximately two miles from their location, the crew of the Hellas Poseidon quickly located the disabled 25-foot sailboat Serena. The crewmember on the Hellas Poseidon reported that there was one person aboard the Serena and that the sailing vessel was taking on water and had damaged communications following an electrical fire in heavy seas.

The crew of the Hellas Poseidon could not assist the man on the Serena due to poor weather conditions, but agreed to stay with him until responders could arrive.

Once on scene, the aircrew decided that the weather conditions made it too dangerous to lower a rescue swimmer and equipment directly onto the sailboat. The aircrew instructed the man to enter the water with a lifejacket and meet the rescue swimmer. The rescue swimmer quickly recovered him and they were safely hoisted onto the helicopter.

The man later reported that he was en route from North Carolina to New York and was caught in a storm that caused flooding and an electrical fire.

There were no reported injuries.

“We would like to applaud the crew of the Hellas Poseidon,” said Chief Warrant Officer Dan Capestany, command duty officer during the case. “They not only quickly reported the distress call, but were able to locate the sailboat and make sure the man was safe until we arrived. The actions of the Hellas Poseidon undoubtedly saved the man’s life. This sailor was lucky that someone heard his distress call since he was so far out in the open ocean. It demonstrates the need for proper safety equipment, amongst which are a registered EPIRB and life raft.”