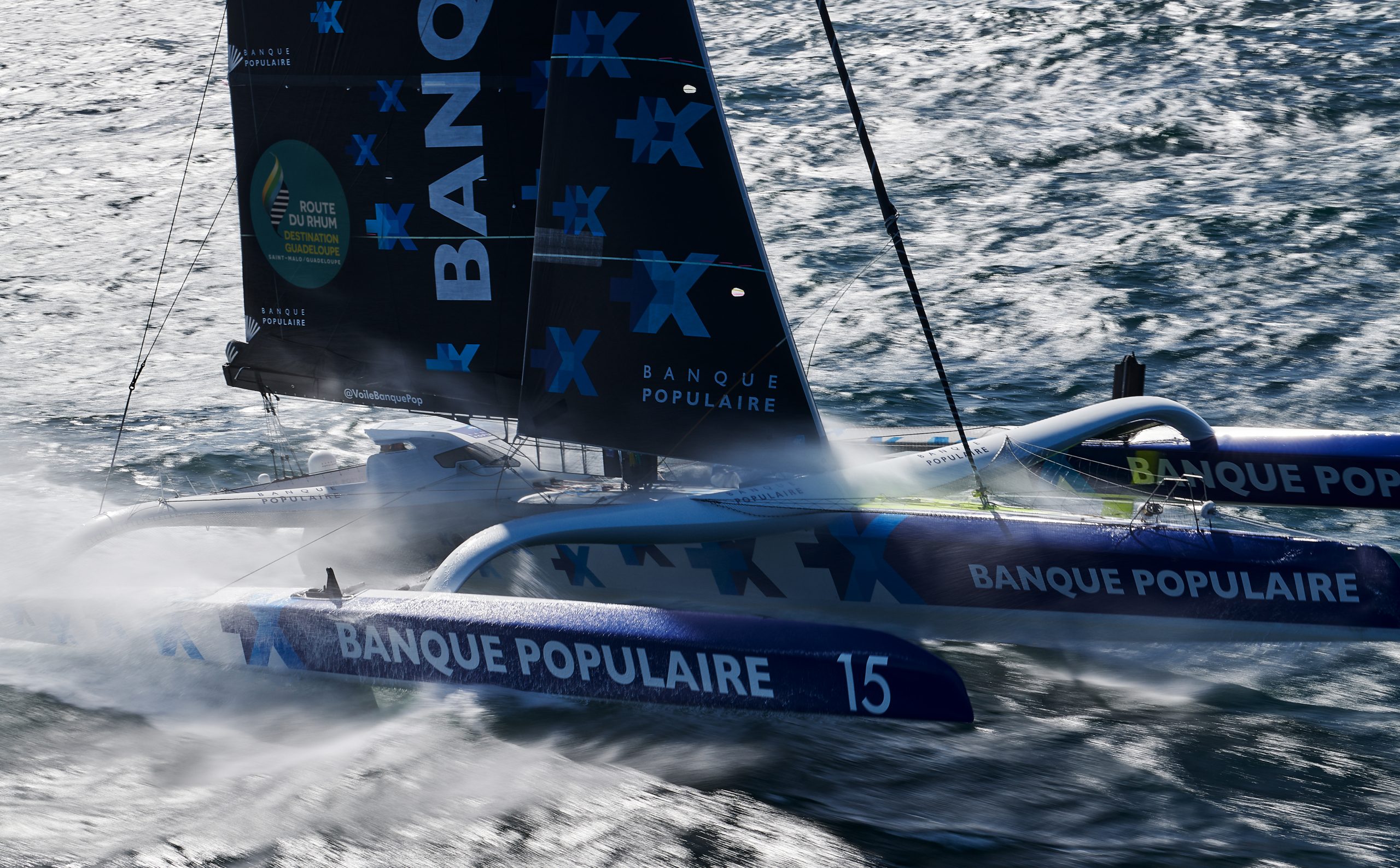 Get ready for the most spectacular show on water as six of the world’s fastest multihulls prepare to rampage across the Atlantic in the 40th anniversary staging of the Route du Rhum-Destination Guadeloupe.

Setting sail from Saint Malo in Brittany and bound for Pointe-a-Pitre in Guadeloupe, the six ‘giants’ in the Ultime class will lead the 123-strong fleet of solo skippers searching for glory in the ‘Queen’ of solo transatlantic races.

The Ultime class is breathtakingly powerful and fast sailing machines that can travel up to 800 nautical miles-a-day. With the right weather conditions, one of them could smash the current seven-day and 15-hour outright record for the 3,542-mile course set by Loick Peyron on Banque Populaire four years ago.

Gabart wins every time he goes to sea, whether it be a transatlantic race, the Vendée Globe or setting a new solo round-the-world record (42 days, 16 hours) or the Route Du Rhum-Destination Guadeloupe in 2014 in the IMOCA class.

He may not have the fastest boat in straight line speed terms and his elegant blue, white and yellow ocean greyhound has been much modified, with new foils and rudders added this year, but Gabart will still be going for the win – he knows no other way.

“Obviously, I’ll do my all to vie for the top spot, but there will be a number of us with the same game plan,” he said. “There’s a fabulous line-up both competitively and technically, with some extremely talented sailors and some extraordinary boats amidst the recent trimarans.

“I’m very happy to be at the start of this Route du Rhum-Destination Guadeloupe as a competitor, but as a spectator it’s going to be a thrilling race, because it will be the first time that our boats have encountered one other.”

Up against Gabart will be Josse on the blue and white rocketship Maxi Edmond de Rothschild which was launched just over a year ago and on which the 43-year-old from Clohars-Carnoet in France has been working hard to prepare for this race. He has focused particularly on the twin challenges of sailing solo and sailing offshore on such a powerful boat.

“We all dream of victory,” said Josse. “On paper, we know that one day or another, our flying boat will dominate, but will it be this year or in the next edition? One thing for sure is that our approach is taking things in the right direction. I

“’ve devoted my whole year to the Route du Rhum to improve my automatic reflexes and gain confidence. We all know that this race will have its own story to tell once again, so let’s hope it’ll be a good one for us.”

Making up the third of the favourites is the redoubtable Armel Le Cleac’h – Vendée Globe and Solitaire du Figaro winner – who has the new Maxi Solo Banque Populaire IX in his hands, another 2017-vintage speedster from the board of VPLP.

Le Cleac’h should be capable of winning this Route du Rhum-Destination Guadeloupe battle of the giants, but a capsize during a delivery in April has put him on the back foot.

“You have to earn the Route du Rhum. I see it as a fresh challenge. If we manage to pull it off, it’ll be even finer,” said the sailor they call The Jackal. The experts reckon he could be a threat but only if the weather is on the light side.

The fourth contender is the old man of the class, Francis Joyon, on his red and grey flying machine IDEC Sport – a very old (2006) much-modified trimaran from the board of VPLP which, as Banque Populaire VII, set the new outright record for this race four years ago.

This will be Joyon’s seventh Route du Rhum-Destination Guadeloupe – probably a record in itself for the sailor who skippered a successful Jules Verne Trophy circumnavigation in this boat finishing in January 2017, in just 40 days and 23 hours.

The 62-year-old legend from Locmariaquer has added new foils, new rudders and a bicycle frame to help him operate the winches and he is not taking part to come second, even if winning is a tall order for him.

“I got into offshore racing via the Route du Rhum in 1990 and this race gave me a taste for more of the same, so I’m returning to it full of drive,” he said. “If I win, it’ll be a kind of Grand Slam, but I’m aware that it won’t be easy.”

Another who is likely to struggle to make the podium, unless breakages play a part in the outcome, will be the veteran solo sailor Thomas Coville on Sodebo Ultim’ – a four-year-old trimaran from VPLP.

This has been a quick boat but it is outclassed by the newer designs in the division. Coville who won the Transat Jacques Vabre in 2017 and set a solo round-the-world record in 2016, will still be doing his best to pull-off an IMOCA-Ultime double in this race, having won the IMOCA class on his first attempt back in 1998.

“I’m in the ideal position in that I have nothing to lose and everything to gain. I have a very reliable boat, which I love and understand completely. I have a story which is continuing on beyond that and I feel fairly free,” said Coville, who will be doing his utmost to avoid a repeat of four years ago when he was forced to retire after a first-night collision with a freighter.

The Ultime class will lead the way across the Atlantic, but you will have to keep a beady eye on them on the tracker, because the race will be over in a flash and the boats are likely to be separated by hundreds of miles of ocean within hours of the start.

At stake are the illustrious class win, line honours and possibly the outright race record…get ready for a white-knuckle ride!