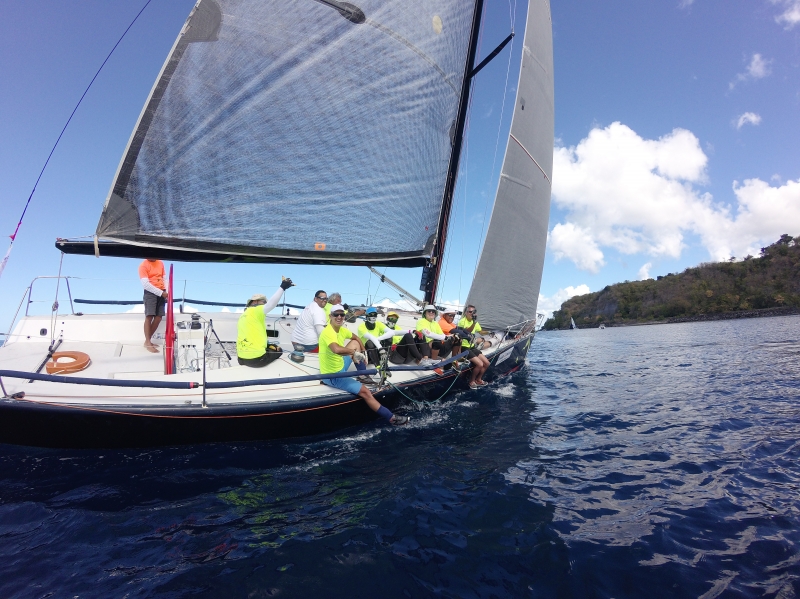 The Round Martinique Regatta Crédit Mutuel AG long round the island coastal race got off in the early hours of Saturday.

The Racing and Surprise fleets set off from the Fort de France Bay at 0400 hrs under the cover of darkness. The 80-mile race round Martinique to Marin started in light winds which built up throughout the long day.

The cruising class had a  0600 hrs start and enjoyed a shorter course and race to Marin, but by no means less technical. The morning breeze gave competitors all the chance to make headway and make tactical choices, particularly for the Racing and Surprise Class who had options and position choices to make whether to be further offshore or in close to land. As is often the case, the first choices quickly determined the order of the boats around the island, to the point of drastically altering early predictions.

The Sunfast 32 GFS Crédit Mutuel, one of the race favourites managed by Claude Granel and skippered by Marc Emig, having headed offshore in search of breeze, found itself caught in an area of no wind outside the Bay whilst those inshore managed to the hold on to the North Easterly breeze. Jean Michel Figueres' Perseverare Diabolicum seized the lead from the moment he passed Précheur and was followed by Virginie Zurillet's Idefix Nicolas Gillet’s GFA Caraïbes. “We basically were stuck for around 45 minutes whilst the others all just sailed past,” describes a somewhat frustrated Claude Granel.

The wind gradually built as the temperatures rose, making for tough work for the crews as they tacked and gybed under the scorching sun. Rodolphe Sepho on his Class40 Rêve de large made his come-back having opted for a slightly offshore course. The fleet filed past the channel of Dominica in the same order and enjoyed accelerated boat speeds.

The fresher wind on the Eastern side of the island provided great reaching up to the Caravelle headland and then crew were able to fly spinnakers for the long surfing conditions down the windward side of the island. The Farr, Perseverare Diabolicum, was the first to hoist the spinnaker and accelerate on the southerly course. Nicolas Gillet and the crew of GFA Caraïbes found the conditions optimum for their new J 111 and finished second in Marin. They managed to keep the Class40 from Guadeloupe at bay on what has been a long and arduous race around the island.

The fleet set off in a compact group this morning, but gradually an order, already evident in yesterday’s racing, became apparent. Tristan Marmousez and crew on La Morrigane were aiming for victory and performed a notch above the rest of the fleet. They took the lead from the outset, which they extended on at the Prêcheur and the north of the island where they held contact with the fast Racing class. Vianney Saintenoy and the Digilife crew remained in contact to kept up the pressure together with the French Naval entry skippered by Yvan Chapon, who did make a come-back in the stronger wind conditions on the windward side of the island.

Round the Diamond Rock, The Round Rock

For the third and final day of racing the fleet will be sent to Fort de France with a circumnavigation of the Diamond Rock, one of Martinique’s most emblematic islands.

Cruising Class: Canquin gets a surprise

Valery Platon, (Canquin): “I was winning on my last tack and suddenly I got pipped at the post by Criss and Thunderboat. We come 4th in real time, and it's a bit frustrating. Fortunately, in compensated time, we win this race. This race was magical. I am definitely “addicted” to the regatta. Conditions, like yesterday, were idyllic, and the manoeuvres and options make it really very interesting. This is my first regatta with our glorious One Toner who has enjoyed some great sailing in the Mediterranean. The tacks between Diamant and Sainte Anne were magical. I have caught the racing bug! We are delighted win for the Association APIPD, a cause we support fighting against sickle cell disease, a genetic and hereditary disease.”

Quotes:
Jean Michel Figueres, Perseverare Diabolicum:
“We get to win in real time and could possibly have broken the Round Martinique record, however it will probably not be enough in compensated time against GFA Caraïbes and even SGS Crédit Mutuel. It all came down to early on in the race, right from the outset in the Bay at Fort de France where we stuck to the shore and it paid off for us. Then the wind just built up, particularly on the windward side of the island where we had some great spinnaker surfing conditions. Rodolphe Sepho's Class40 came back with his big asymmetric sails but fought him off to cross the line first.”