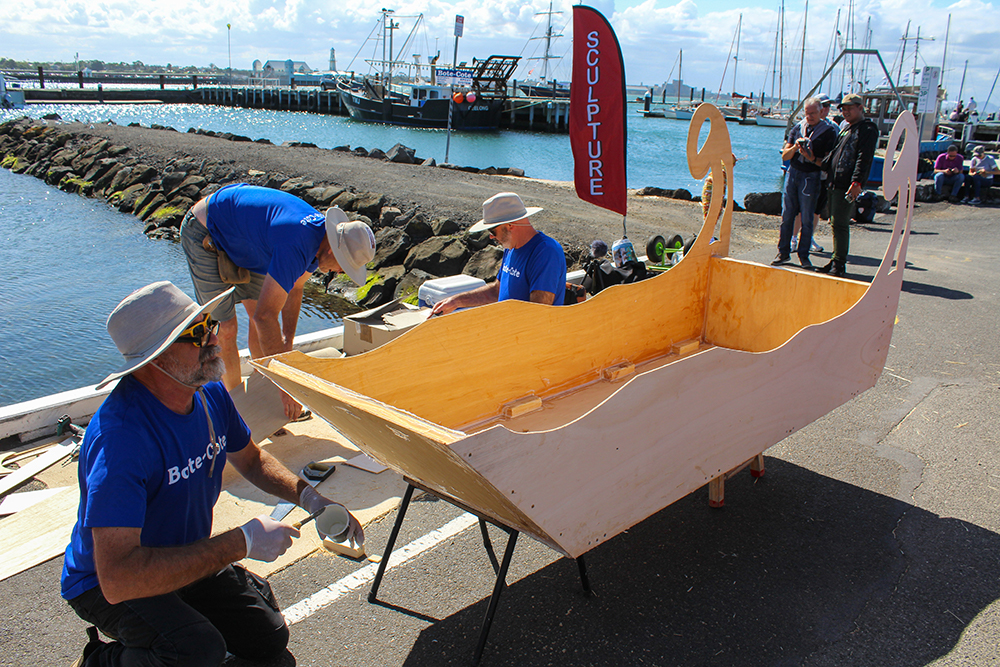 The traditional ‘Rough and Ready’ boat build took over Stoney Pier today at the 2020 Wooden Boat Festival of Geelong, with six teams competing to design, build and race their carbon neutral boats.

Provided with basic materials, the competitors had only two hours to work together, using their minds and imagination to develop their ‘rough’ vessels.

With no two boats looking the same, the standout belonged to the Geelong Sculptors team who quickly assembled their boat with artistic flair, featuring two special ‘sculptures’ on the stern.

Vice President of the Geelong Sculptors, Terry Guida, said he and his team have been anticipating this event for the past months.

“We had a design in mind which we have tweaked a few times,” Terry said. “We have been planning and practising for a few months, but the main thing is we are here for the fun and just hope it floats.”

Terry has been involved with the Geelong Sculptors since 2002 and the attention to detail by the whole team was second to none. The Sculptors proved they were ‘more than ready’ for the ‘Rough and Ready’ competition.

The next challenge is set for tomorrow when teams put their boats to the ultimate test in the race around the marina, kicking off at 11.15am at the Royal Geelong Yacht Club.

Ready for the challenge are the defending champions, the Coast Guards, who have their sights set on maintaining their title.

As a first timers at the Wooden Boat Festival, Terry and his team have enjoyed their time and are committed to returning to future events.

“I love the many varied lifestyles of people who build beautiful things,” he said. “There is a great range of things to meditate and enjoy at the Wooden Boat Festival of Geelong.”

The Geelong Sculptors are a local organisation comprising of 70 members who sculpture in all mediums across the Geelong region. For more information and to get involved, please see www.geelongsculptorsinc.com.

The Wooden Boat Festival of Geelong will continue to run tomorrow over the Labour Day Holiday (9 March 2020) at the Royal Geelong Yacht Club.

To view the full program of events, please see http://bit.ly/2wNG4dT.