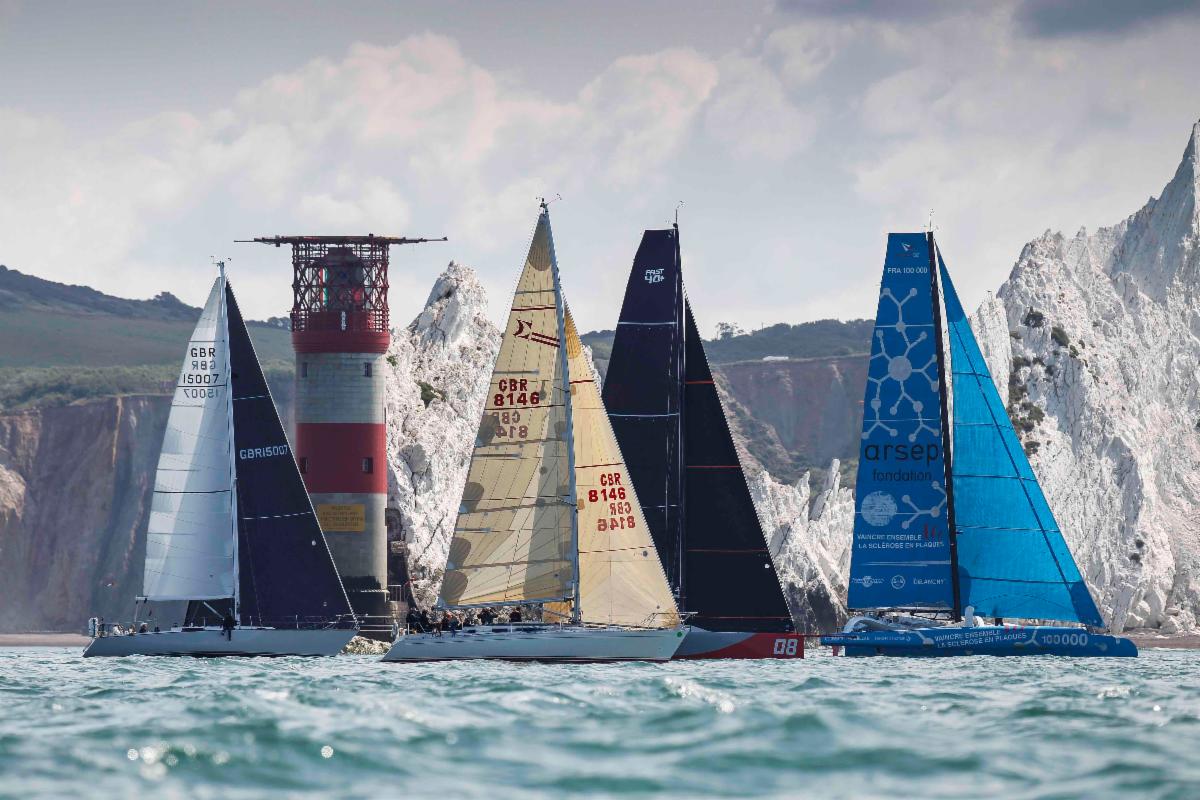 Racing past the Needles Lighthouse in the RORC's Cowes-Dinard-St Malo Race © Paul Wyeth/pwpictures.com

09/06/2020
The Royal Ocean Racing Club (RORC) announce further changes to some of its key events during June and July as the season progresses and the COVID-19 pandemic continues to evolve. The club continues to monitor the latest advice from the Government, World Sailing, the RYA and rescue authorities, and with recent changes to guidelines it is hoped that racing may finally get underway in August and September.
Morgan Cup – Cancelled

Organised by the RORC, with a trophy from Royal Thames Yacht Club and the support of the Royal Cork Yacht Club and the Royal Yacht Squadron, this year's Morgan Cup was expected to be extremely popular. The race was to finish in Cork harbour for the first time – to coincide with the Cork 300 celebrations for the 300th anniversary of the oldest yacht club in the world – the Royal Cork Yacht Club.
The course had the fleet travelling the traditional south westerly route past the Lizard and Land's End and then on across the Celtic Sea to Crosshaven in Cork. In addition to the Morgan Cup for the overall winner under IRC rating, HRH Prince Charles, Prince of Wales, kindly donated a trophy to the Royal Cork Yacht Club for the line honours winner in the race.
RORC Racing Manager Chris Stone comments: “We had come up with an alternative course and considered changing the start of the race to the weekend (from Wednesday 8 July), but sadly that couldn't happen with the latest Government advice. I am really saddened for the Royal Cork (and our competitors) as I know they had put a lot into their big anniversary celebrations and it was going to be a brilliant race and celebration in Cork.”
SNT La Trinité-Cowes By Actual – Cancelled
It has only be running for the last two years, but the SNT La Trinité-Cowes Race has had immense success. Held on the weekend prior to the RORC Cowes-Dinard-St Malo Race, it runs from the club's (SNT) home port in La Trinité to Cowes on a 350nm course. It is a race of enormous tides and tactical decision-making that doesn't stop throwing up challenges, even as competitors come through the western entrance to the Solent.
Didier Visbecq, Président of SNT comments: “Unfortunately the new COVID restrictions in France and the restrictions in the UK are not favourable for the regatta in July. It seems to me that we must regretfully take the decision to postpone this superb race until 2021. It is with great regret that we have had to come to this decision as we thoroughly enjoy racing to Cowes. However, we look forward to racing with the RORC in 2021.”
Cowes-Dinard-St Malo – Cancelled

The event was first sailed in 1929 and other than years lost during the Second World War it has remained a fixture ever since its inception. The numbers have remained high since the 1950's (generally somewhere between 130-200 boats), and on a regular annual basis it would be the third or fourth largest race in the Solent. The 150nm dash to the Breton port of St Malo always starts on the Friday of the Bastille Day week, or weekend.
The race can be very difficult to win as it traditionally closely follows the rhumb line and provides limited pass or overtaking opportunities as the fleet navigate their way past the Casquets TSS and the Channel Islands. In recent years, with the advent of the SNT La Trinité-Cowes race, fleets have been even larger and more competitive. The club looks forward to 2021 which should see another large fleet in the lead up to the Rolex Fastnet Race, which finishes in nearby Cherbourg.
IRC National Championship – Move to September confirmed

The RORC Committee have confirmed the move of the IRC National Championships from its scheduled June timeslot to Friday 11th, Saturday 12th and Sunday 13th September. The move sees the IRC Nationals being run together with the IRC Double-Handed National Championship scheduled for the same weekend.
IRC Rating Director Dr Jason Smithwick commented: “The later schedule is a good result for the IRC fleet and allows us the best chance of giving them a top level event with sailing in good conditions.”
Looking further ahead to August
The club now turns its attention to August and the traditional Channel Race and the quadrennial favourite of the L'Île d'Ouessant Race (or Ushant race), where it's hoped club racing can begin again.
RORC Racing Manager Chris Stone discusses some of the complexities and considerations in getting racing under way:
“We are working to provide information as early as possible for all races, with a view to giving members and competitors an update about races no later than 30 days (4 weeks) before the scheduled race date. We will continue to ensure these updates come as early as possible to limit the disruption to those competing. There are many areas to monitor and consider, including the safety of the RORC staff and volunteers before we simply set off and go racing.”
“With the cancellation of the July events, we now look more seriously at the Channel Race and the L'Île d'Ouessant Race,” continues Stone. “Will Government regulations allow yachts  to sail fully crewed? Current social distancing measures make it difficult for that to happen safely. Regulations also currently don't permit people to stay away from their primary residence, so we eagerly await some changes  before overnight races can return to normal.
“There is also more serious border and immigration issues that need to be resolved. At present, sailing into foreign waters in a recreational capacity is against regulations, but potentially, there may also be some quarantine issues to consider going forward. And lastly, we need to be extremely aware of the situation with our search and rescue authorities and examine their willingness to have events start up again. They are, after all, crucial to our sport, especially in maintaining the safety of all those competing.”

Stone further noted: “We appreciate that it must be terribly frustrating watching the season go by from land. We feel the same and would like to ensure all our competitors that we are doing everything within our power to get us back to racing as quickly and as safely as possible.”