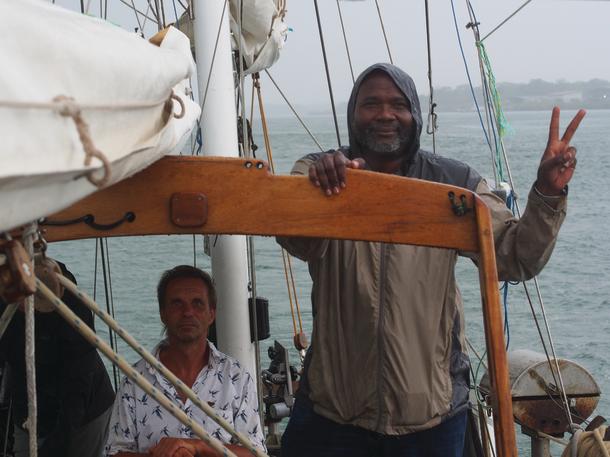 The Panama canal could be described as the world’s biggest shortcut, or the world’s shortest big cut.

For circumnavigators on the popular tradewind route from east to west, fondly described as the ‘barefoot route’ or ‘coconut milk run’, it provides a path to the Pacific without having to brave the Northwest Passage, or infamous routes around South America. The downside is the fees involved, but these are likely to be nothing compared to those a trip around ‘the Horn’ might induce in boat repairs.

For us, the whole procedure began prior to our arrival in Panama by contacting a canal agent. While not a necessity, we made the decision to use an agent for convenience and time efficiency, since our crew for the canal transit were to fly home from Ecuador a few weeks later.

Our agent insisted we go to Shelter Bay marina, next to the canal entrance on the Atlantic side, to get measured by the canal officials, which he arranged promptly for the day after our arrival.

He visited us himself the morning of the measurement to examine the boat, check the height of our freeboard, whether we had suitable cleats and discuss lines and fenders, which we rented from him to be on the safe side. He was friendly and helpful, spoke good english, and gave us clear, thorough advice.

Our agent advised us to opt out of going alongside a tug. Since its freeboards are usually much higher than ours, there is a risk that its hull would put pressure on ours. Plus, the deck cleats aboard our 100 year old wooden yawl might not survive the huge forces they can exert.

He instructed us to anchor in The Flats anchorage on the day of the transit to wait for our advisor to come aboard and explained that we would need one helmsman and four line handlers: two for each side in case we ended up alone in the lock. Luckily, with a crew of eight, this was no problem for us. However, if you are short, there are usually plenty of advertisements in the marina for volunteers wanting to gain experience before tackling the first canal transit with their own boat.

Finally our agent collected our fees and told us he would be in touch later with the transit date, given to him only after he’d deposited our money.

Next came the canal official. She recorded all the details of our boat such as maximum speed (5.5 knots), if our navigation lights and horn were working (yes), did we have a holding tank (yes), could we see the position of our rudder (yes). She too examined the boat before taking out a tape measure to measure the length overall herself (18.5m), beam and height above the waterline (1m).

That evening we got an e-mail with a transit date in ten days time. We stressed to our agent our time constraints and that we would appreciate an earlier date if possible. Luckily the next day he sent an update that he had found us a slot two days earlier, which we were happy with and were grateful we had an agent to arrange this for us.

With a week to play with we cruised the surrounding lush green Panamanian coastline, visiting the popular anchorages of Portobelo and Puerto Lindo, keeping our eyes peeled for sloths and crocodiles.

Heading to the lock gates

On the afternoon of our transit date we motored to The Flats anchorage to await our advisor. From here we watched excitedly as huge tankers and freighters traversed up and down in front of us.

At about 3p.m., our first advisor arrived onboard to take us through the first set of three locks and help us tie up to a mooring buoy in Gatun Lake for the night. We would do the remainder of the crossing, involving traversing Gatun Lake, the next day. This is common procedure for small vessels crossing from the Atlantic to the Pacific side with relatively low engine speeds, since it would be hard to transit both sets of locks and cross the lake (35nm) in one day.

Our first advisor was tall with a big smile, who shook hands and introduced himself to everyone as he stepped onboard. He was very friendly, relaxed and not at all bothered that we could not manage much over five knots under motor. He advised us that going into the locks we would be tied to a similarly sized sporty fishing boat anchored a short distance away.

We set off towards the first lock gates, feeling important as we proudly took our place beside the giant vessels steaming back and forth. Our spirits refused to be dampened by the grey skies above us, but the same cannot be said for our bodies, as the heavens opened and deposited buckets of rain just as it was time to start rafting up to the fishing boat and all hands were needed on deck.

It was the beginning of May and it appeared that rainy season had arrived in Panama.

The rafting procedure was slightly chaotic and rather frustrating, with no-one really taking command as lines were passed back and forth between the two boats and instructions given in Spanish from the other boat and English and German from our boat interchangeably.

The whole time our captain was desperately trying to attract the helmsman of the fishing boat’s attention, who was chatting away on the phone while using his free hand to thrust the throttle forwards and backwards at alarming rates in an attempt to keep the two boats on course. Our 70 horsepower engine was no match for the two of his, which the helmsman had boasted to us were 700 horsepower each. We nervously watched our winches creak under the strain of the ropes now rafting our boats together.

Once the advisors on each boat were satisfied with the situation, they instructed the fishing boat to use his engines to position us in the lock behind a Chinese military vessel. Before we entered, thin lines with monkey fists were thrown down onto our decks, two on each side, to which we attached our lines to be hauled up the sides of the lock.

I was quite apprehensive about the handling of the boat inside the lock, especially after hearing a few tales of bad experiences from others. I need not have worried however, as the procedure was quite straightforward and not particularly different from the canals we had been through before including the Kiel canal in Germany, and the Caledonian and Crinan canals in Scotland, only this one was on a much larger scale!

In between the locks, the canal line handlers walked our lines to the next lock, while we relied on the engines of the fishing boat to propel us forwards. These were the hairiest moments for us, as the helmsman of the other boat struggled to steer with us attached and we watched anxiously as he revved his engines, we felt, unnecessarily hard.

The moment he put his engine in gear we felt both boats lurch forward and our old wooden decks screamed under the load. We were glad when we were through the third lock and could finally decouple ourselves from the other vessel and motor peacefully at our own pace to a mooring in Gatun Lake, close to the locks for the night.

After devouring a plateful of food, a mandatory requirement, our first advisor left us here and told us to expect a replacement the next day at 6am in order to make it through Gatun Lake and be ready to enter the locks at the Pacific side by noon.

After an early alarm, we waited for five hours for our next advisor to arrive. He was less friendly than the first and spent most of the trip watching basketball games on his phone, sometimes even down below when he needed to recharge his battery! He would look up now and then to instruct us to stick to our side of the traffic separation scheme.

Despite our vulnerable position feeling small beside the huge ships around us, it was a pleasant journey through Gatun Lake, taking in the surroundings and admiring the ginormous vessels that we were sharing it with.

As we approached the next set of locks, our new advisor gave us the alarming news that we were to be positioned alongside a tugboat in this lock. This was a scenario we had been specifically warned against by several sources, including our agent. It was not an option we had ticked on the canal authorities form.

After some heated phone calls between our advisor and agent, the latter then arranged with the canal authorities for us to go alongside the wall instead. The tug would do the same on the opposite wall, thus remaining unattached.

We were extremely glad to have an agent to solve this issue, as this was something our advisor was unwilling to do, his solution being to threaten us with another night on the anchorage instead.

After this brief panic, the rest of the journey passed without incident. We watched in awe as an enormous tanker followed us into the final set of locks, it was so wide there were barely inches between its sides and those of the lock. Large vessels like this are towed in by trains on either side of the lock and does not use its own engines. We prayed it would stop in time!

It was dark as the last lock gates opened up and released us into Pacific waters for the first time. A new chapter of our sailing adventure had begun, as the shimmering lights of the Panama canal faded into the distance behind us.

It was a great moment. ≈