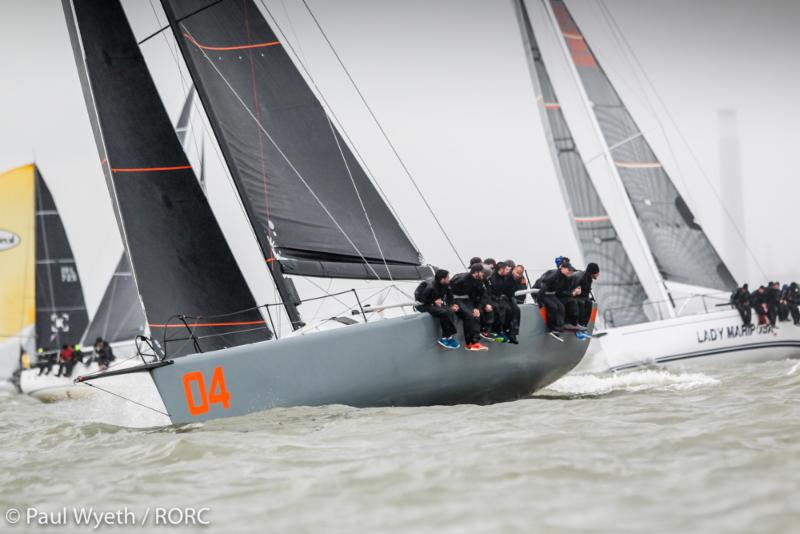 he Easter weekend is traditionally when flowers start blossoming, birds return to the trees, animals rouse from hibernation and the earth generally warms up, but on Day 1 of the RORC Easter Challenge, supported by North Sails, none of the above was seen.

Competitors across the four classes braved conditions, with rain drops falling like icy bullets and an easterly wind from Russia that brought a Southern Ocean chill.

From his race committee boat located in the central Solent just east of the Brambles Bank, the Royal Ocean Racing Club's PRO Stuart Childerley had three windward-leeward races scheduled but in the end cancelled the last one sending competitors home to gently steam and thaw out ashore.

Good Friday was a good day if your boat was called Jubilee. In IRC Zero Tony Dickin's GP42 of this name comfortably scored two bullets ahead of the Ker 46 Lady Mariposa and the Dutch de Graaf family's newly acquired Ker 43 Baraka GP (formerly American Bill Coates' Otra Vez). Clearly the Jubilee crew, who regularly compete in the FAST40+ class, were more race-ready than most despite this being their first day out in their boat this season.

Dickin's previous Jubilee, the J/109 was also unbeaten today, claiming the lead in the IRC Two ahead of Ed Fishwick's Sun Fast 3600 Redshift Redloaded and the well sailed J/35 Bengal Magic of James Chalmers. Christopher Preston, who has owned his Jubilee for two years now, 'IRCed it' over the winter.

He is sailing this Easter Bank Holiday weekend with a supreme team that includes newly appointed Cowes Week Regatta Director Laurence Mead and renowned coach, umpire and rules expert Bill Edgerton. The trio are rotating roles this weekend to enable any or all of them to be able to take the boat out during the summer: Preston is keen to 'give back' to sailing and on Tuesday nights regularly takes out UKSA Junior Instructors.

Of their performance today Preston said: “We have done good preparation this year and have a crew with nicely diverse experience which just seems to fit together really well. Today we were lucky: We had really good starts and wind with tide is good for a J/109.”

Jubilee has a highly mixed program this year from J-Cup and Cowes Week to some offshores where Preston will compete doublehanded with Mead. This being the RORC's annual coaching regatta, today the club's CEO Eddie Warden Owen and former professional coach, bucked the conditions, to assist the Jubilee team (among others) with some upwind trim issues.

Nifty Skipper Sam Cox recounted: “We tried to take account of the strong tide that was with you on the downwind drops – getting the jib up and the kite down quickly to have a clear leeward mark rounding. In the first race we had a few 'clusters' but then everyone did. The rain didn't help that. In the second race we got a fantastic start at the pin end where there was a lot of bias. It was good the third race didn't happen because everyone was frozen.”

Significantly, Nifty also leads the first ever day of racing for the new 'Performance 40' class. Cox explains: “We want good on the water racing rather than trying to race a boat that is several minutes ahead. There are a lot of boats in this size and speed range that aren't doing the same racing.”

“That means us, Cobra and Erivale down to the faster First 40s – there are around 20 boats eligible,” explains Cox. “We intend to do six or seven races each year of which five will count.”

These will be inshore, Solent-based and will include the RORC's Vice Admiral's Cup in mid-May.
Racing continues tomorrow with the wind forecast to be from the WNW, having performed a 180° shift overnight, raising both temperatures and hopefully spirits.