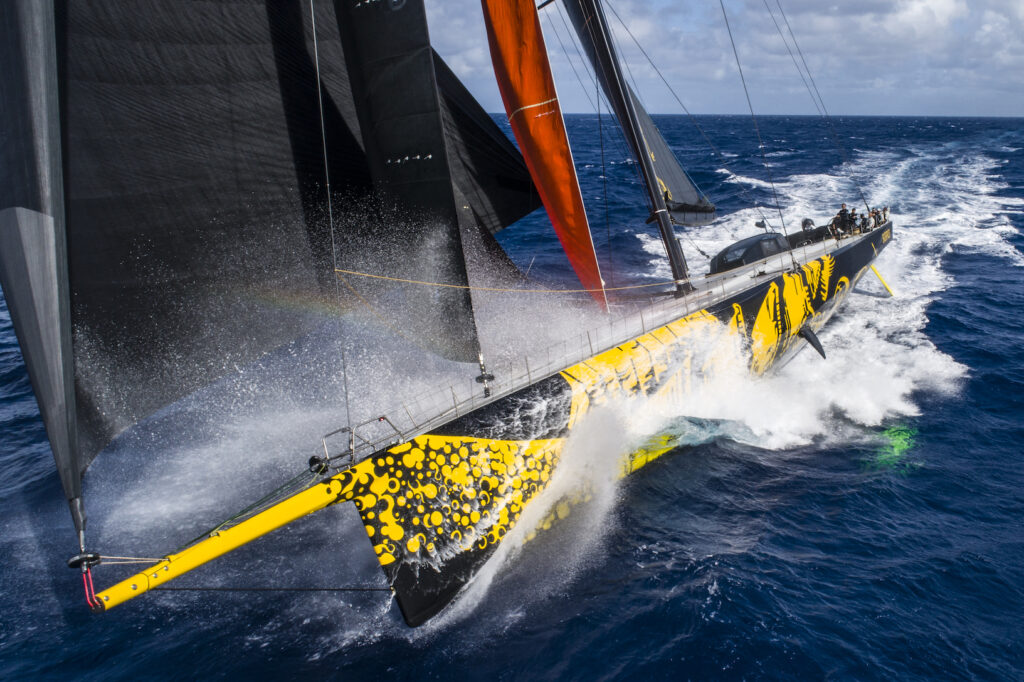 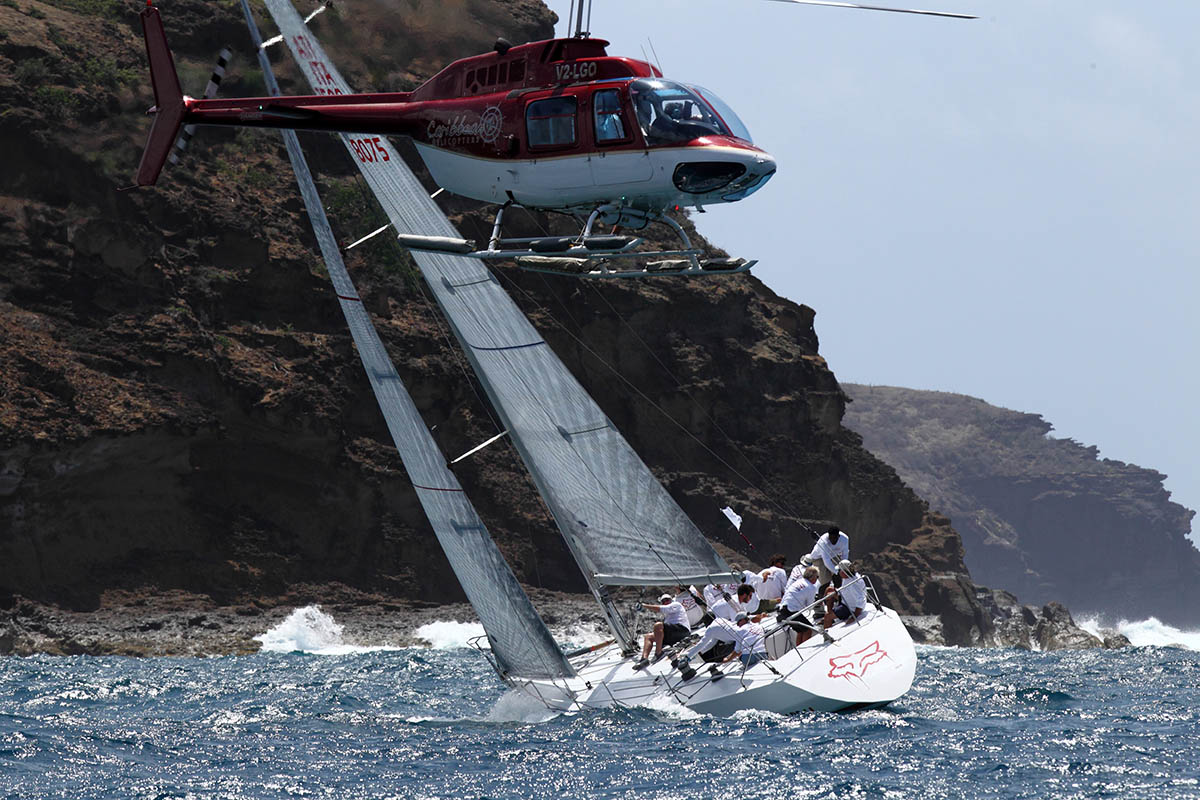 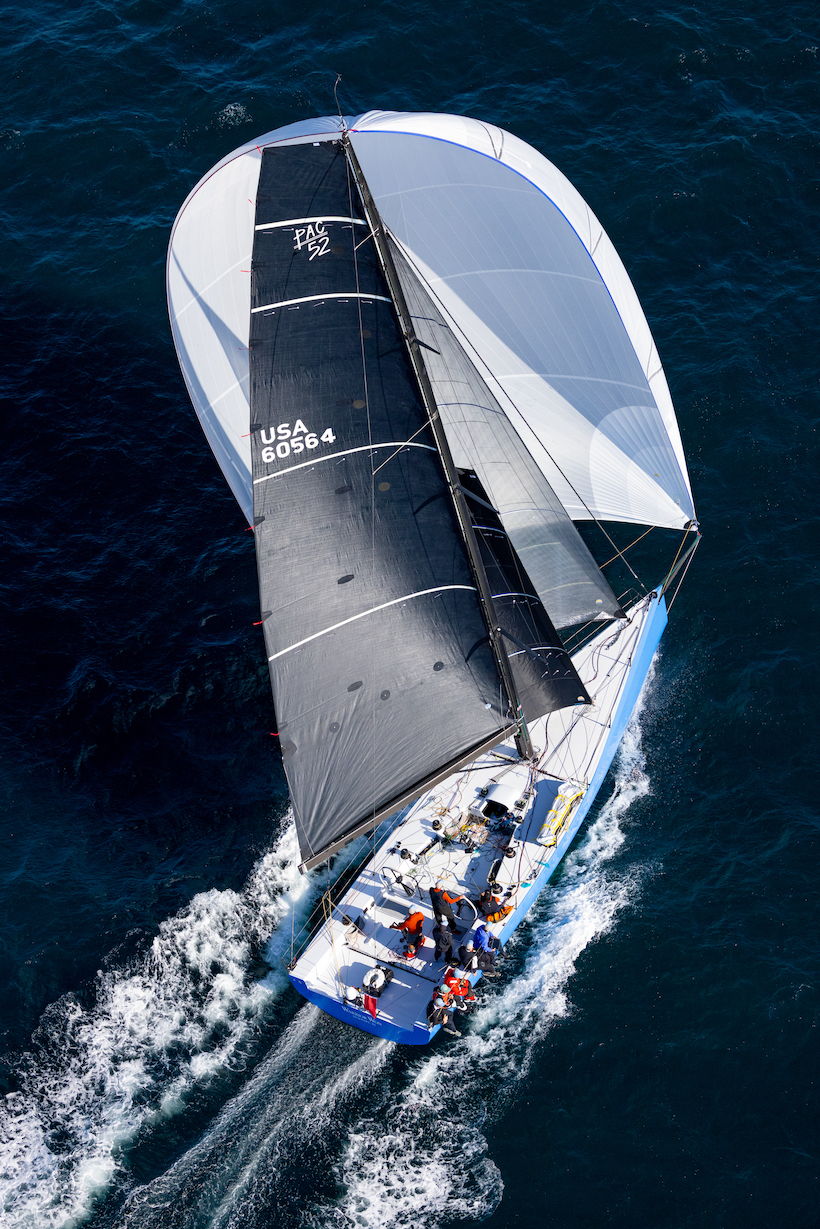 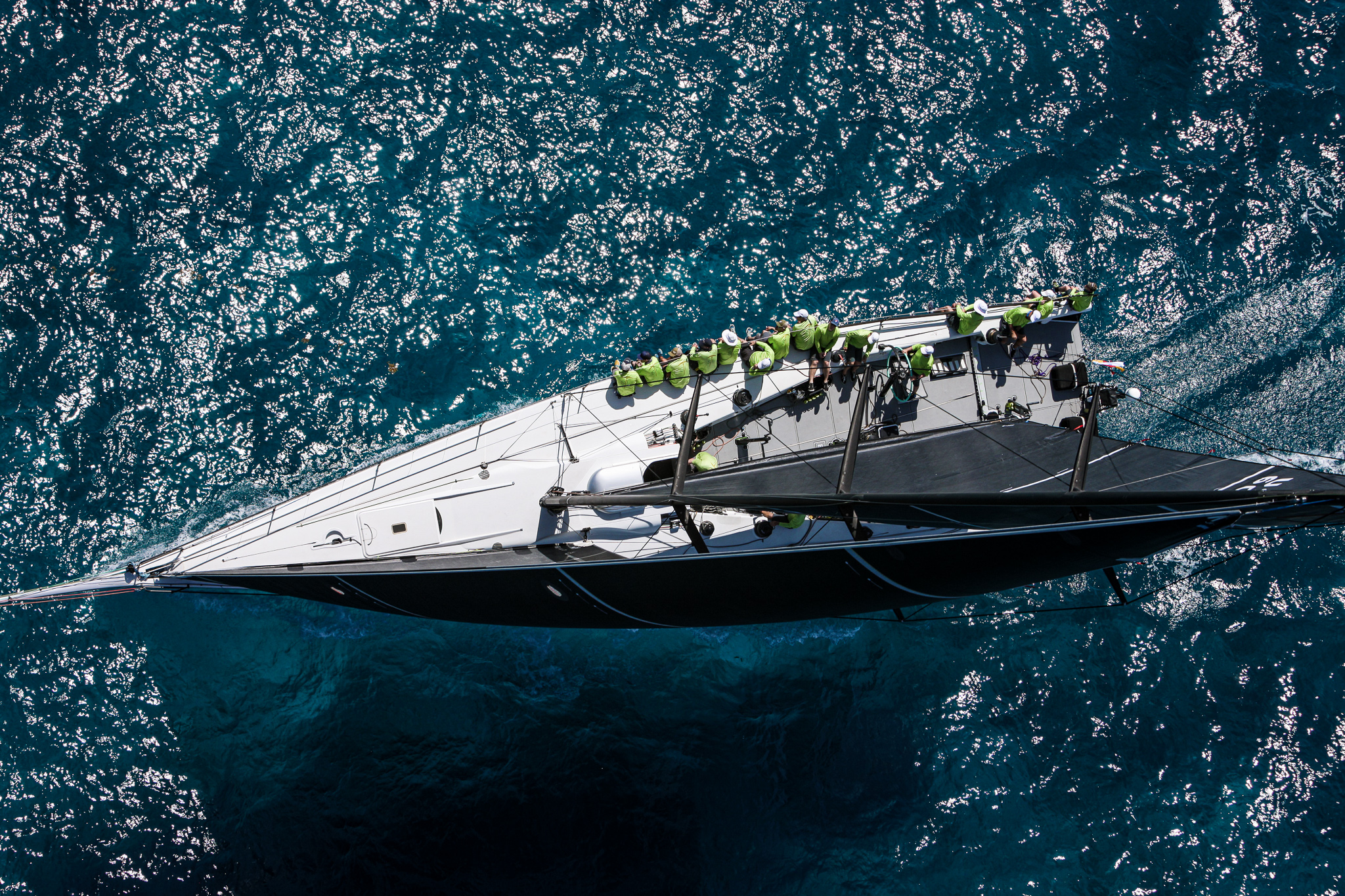 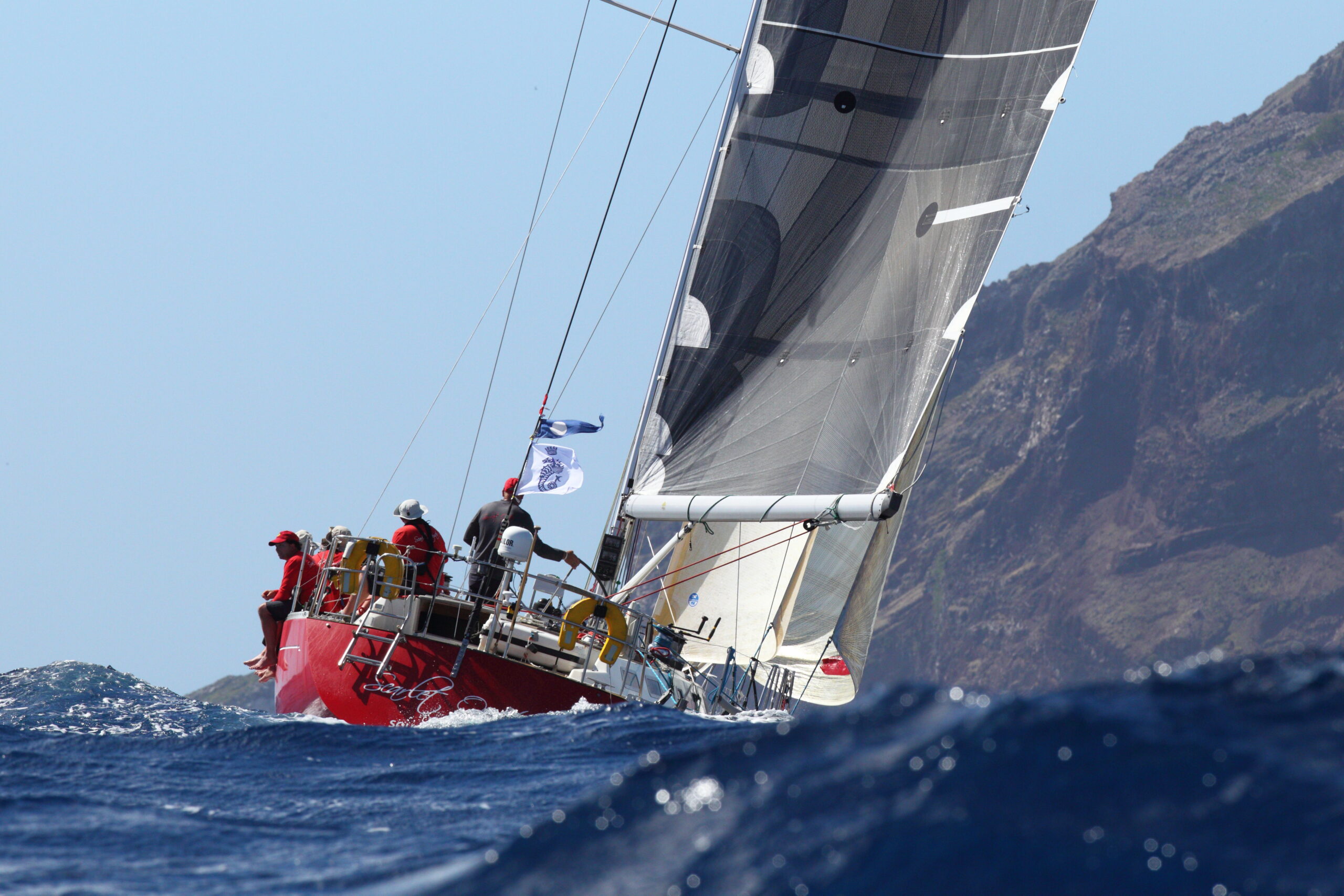 The Oyster 48 Scarlet Oyster has won its class at the RORC Caribbean 600 a record six times. Pic - Tim Wright/Photoaction.com 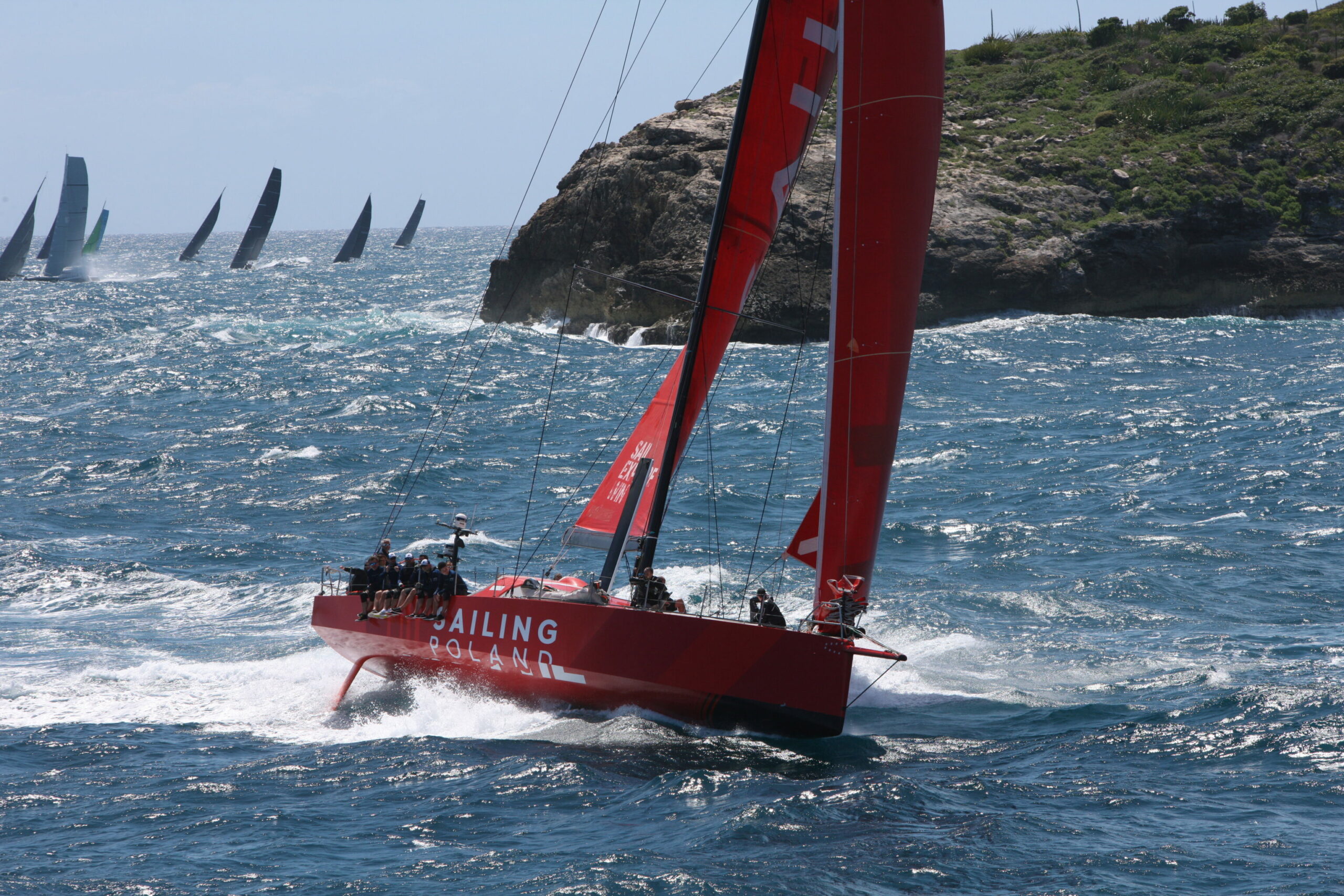 Groovederci Racing will have a multinational crew on board the chartered VO65 Sailing Poland. Pic - Tim Wright/Photoaction.com 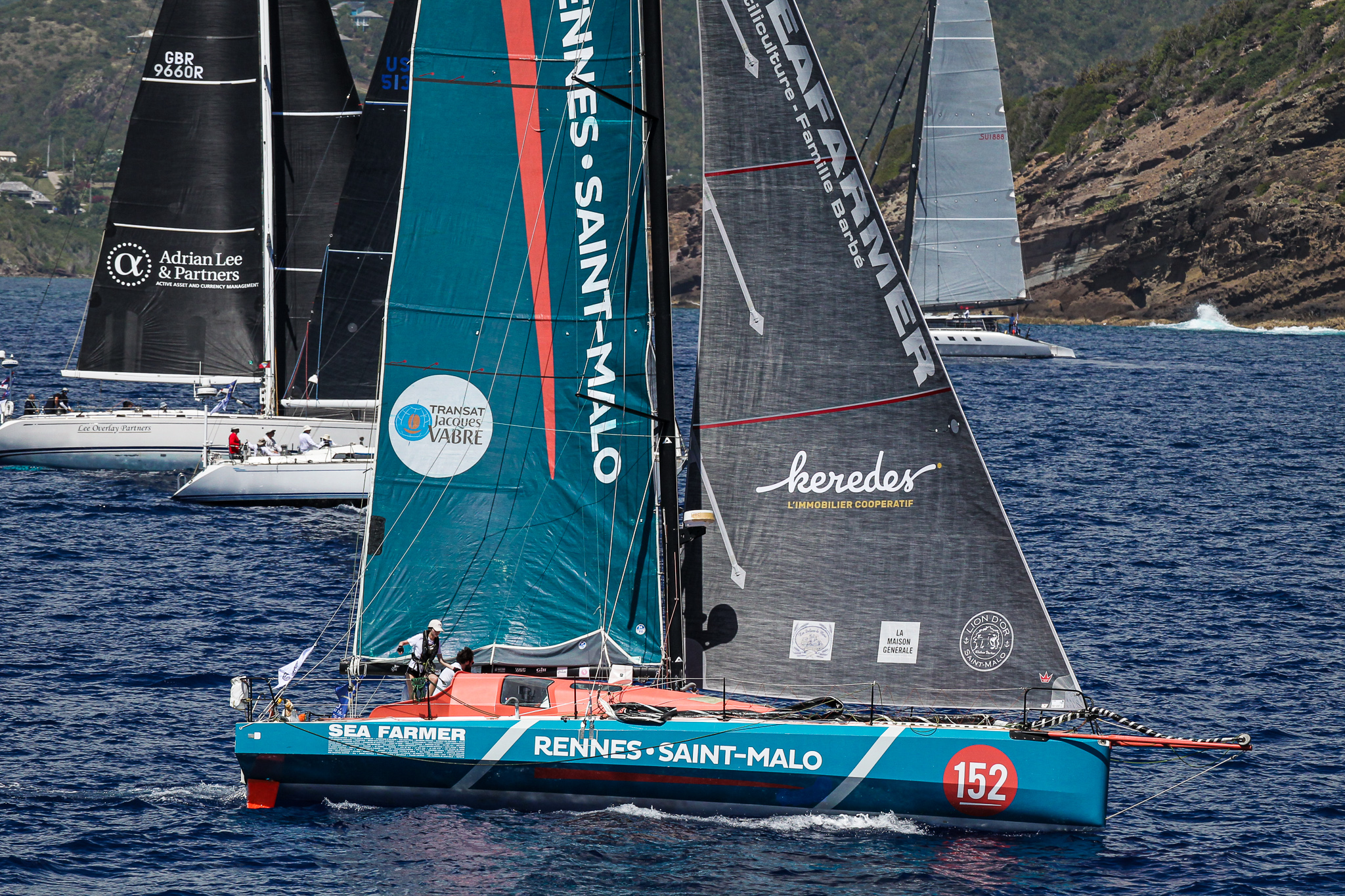 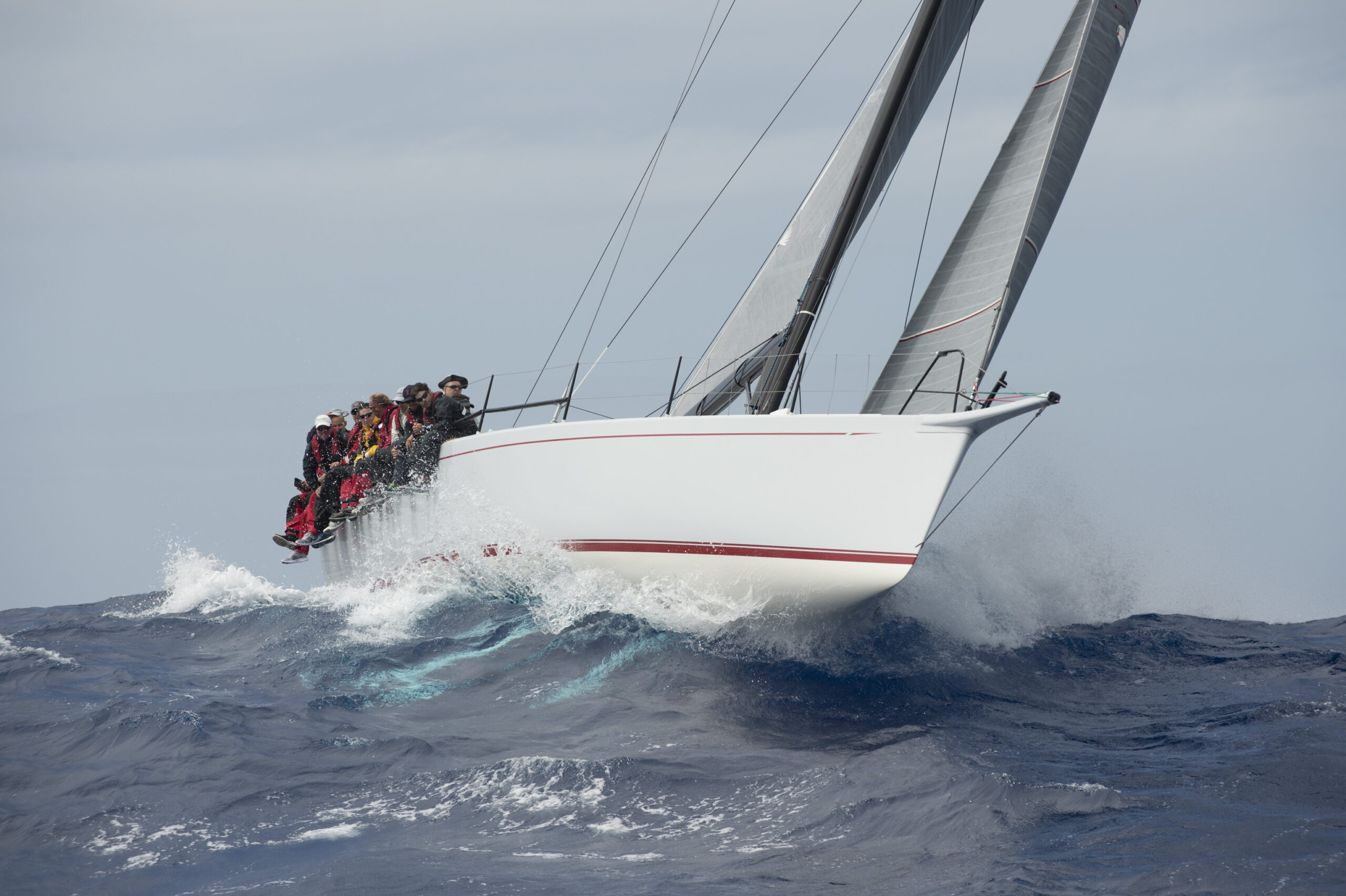 The Cookson 50 Privateer was the overall winner in 2013 and second overall in 2018. Pic - Tim Wright/Photoaction.com 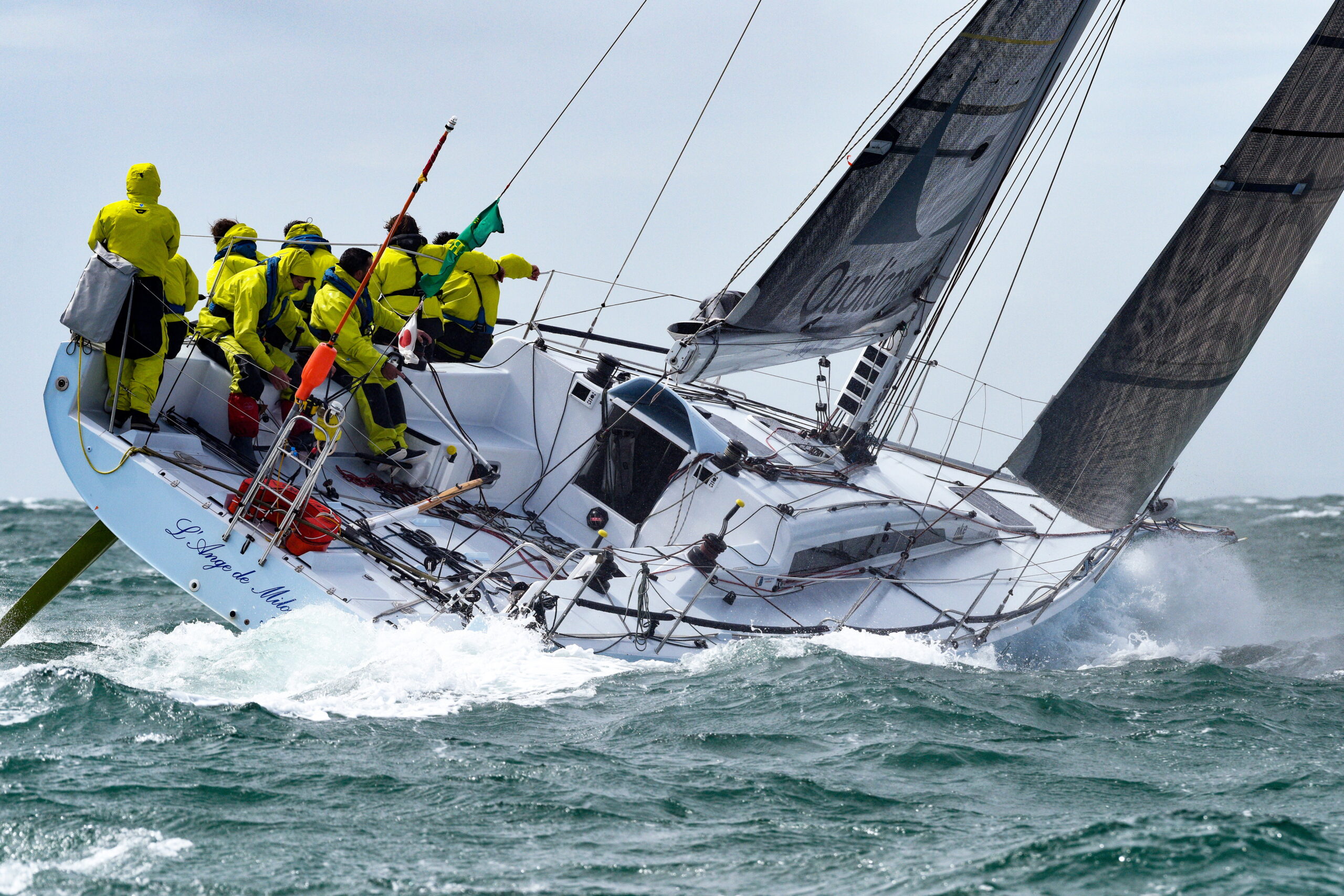 The Milon 41 L’Ange de Milon is competing in IRC One. Pic - Rick Tomlinson 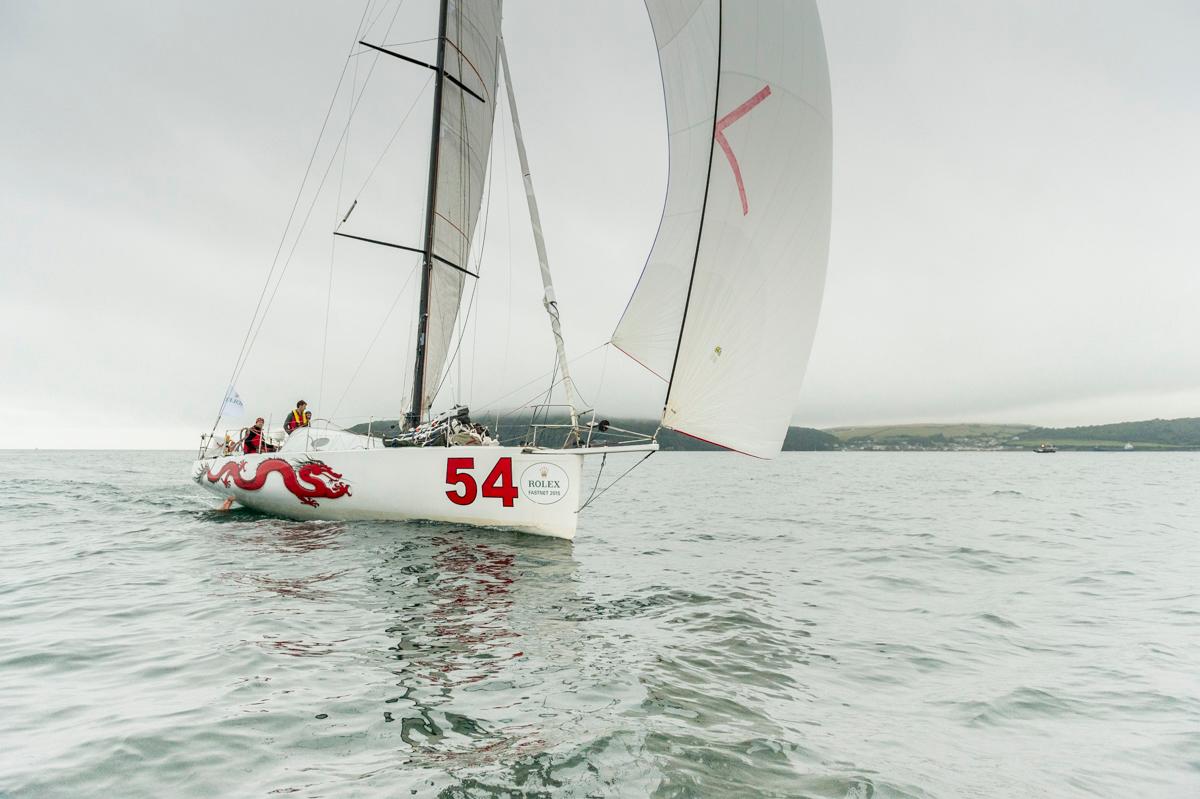 Seventy-five boats are entered for the RORC Caribbean 600 which starts on Monday 21 February in Antigua.

The bulk of the astonishing fleet will be racing under IRC for overall victory and the RORC Caribbean 600 Trophy. The glitterati of the sailing world will be taking part, as will passionate Corinthians. Over 700 sailors from 32 different nations will take on the thrilling race in the deep mid-winter of the Northern Hemisphere. The beauty of the course is matched by the beast of conditions; trade winds and ocean swell create an exhilarating blast in tropical air around 11 islands in the Caribbean.

Dmitry Rybolovlev’s ClubSwan 125 Skorpios (MON), sailed by Fernando Echavarri, and the VPLP/Verdier 100 Comanche (CAY) skippered by Mitch Booth are favourites for Monohull line honours. Both maxis are very capable of beating the monohull race record set in 2018 by George David’s Rambler 88 (37 hours, 41 minutes, 45 seconds). The wild card for Line Honours is the Farr 100 Leopard skippered by Chris Sherlock. Leopard took Line Honours in the very first edition and it is great to see the famous boat back in Antigua. Comanche and Skorpios have only raced each other once before with Comanche taking the spoils in the 2021 Rolex Middle Sea Race.

“The RORC Caribbean 600 is a complicated race with a lot of different legs,” commented Skorpios skipper Fernando Echavarri.

“For Skorpios, how we play with the sails will be a very important area. Sail changes take a lot of time and each one reduces your speed, so we need to minimise the changes. To do that we choose sail combinations that are very versatile for the conditions and play with reefs and outriggers. It is super-important to make the right calls at the right time. The owner of Skorpios loves the two-day 600-mile races and this race is very interesting with so many islands and different points of sail, all in a beautiful place to race.

It is great to race against another very powerful boat. We know Comanche is very good in big breeze. Skorpios is a new boat and we have been making some changes to increase the performance in those areas where Comanche is strong, especially downwind. We were in race training mode crossing the Atlantic from Lanzarote to Antigua. It took us six days and seven hours to cover 3,120 nautical miles (average speed 20.66 knots).”

Fifteen maxis will race in IRC Zero, just one less than the 2021 Rolex Fastnet Race. For the RORC Caribbean 600 six Volvo 70s and three VO65s will be racing in IRC Super Zero.

The fastest on IRC Rating is the Volvo 70 L4 Trifork (DEN) sailed by Jens Dolmer, with Joern Larsen at the helm. Tactician Bouwe Bekking commented that L4 Trifork’s primary goal is to be the first Volvo 70 to finish the race. Competition in the Volvo 70s will come from Johannes Schwarz’s Ocean Breeze with a crew from the Yacht Club Sopot in Poland and Il Mostro (CAN) skippered by Gilles Barbot of Atlas Ocean Racing. I Love Poland (POL) skippered by Konrad Lipski has one of the youngest teams in the race, including teenagers Mateusz and Kacper Gwozdz. Olympic Gold medallist and Volvo Ocean Race sailor Tamara Echegoyen will be racing on Jens Lindner’s HYPR (ESP).

The VO65s will enjoy a battle within IRC Super Zero. Ambersail II (LUT) is skippered by Saulius Pajarskas with an all-Lithuanian crew. The Austrian Ocean Race Project’s Sisi (AUT) is skippered by Gerwin Jansen. Deneen Demourkas from Santa Barbara, California has chartered Sailing Poland’s VO65 and is competing under the famous team banner of Groovederci Racing (USA). The multinational crew includes Marc Lagesse as navigator and Taylor Canfield as tactician.

Over the past two decades, Demourkas’ Groovederci Racing has excelled in top one-design classes, including three world championship victories in the Farr30 (formerly Mumm 30) Class. In 2015, Deneen was nominated for ISAF Rolex World Sailor of the Year. The two lowest rated boats in IRC Super Zero are the Mills 68 Prospector (USA), sailed by Shelter Island Transatlantic Partners and taking part in their third race. Richard Tolkien at the helm of his Open 60 Rosalba (GBR) will be taking part in his first RORC Caribbean 600.

Juggy Clougher who was on the delivery, has raced around the world more times than Phileas Fogg and won the race overall with Beau Geste and Rambler. “Just bashed our brains out upwind in 20 knots for 1,200 miles, so we can race for 600 miles! That’s what you do…. this is a really special race!”

With 19 teams, IRC Zero is the largest class in the RORC Caribbean 600. The competition within the class is set to be red hot. Watch out for the battle of the two French Ker 46s; Dominique Tian’s Tonnerre de Glen and Frederic Puzin’s Daguet 3. Adrian Lee, winning skipper for the first edition with his Cookson 50 will be taking part in his sixth race in Swan 60 Lee Overlay Partners II (IRL). Adrian’s twin teenagers, Dasha and Alexander will be racing on board.

Two British JPK 1180s will be among the favourites in IRC One. Tom Kneen’s Sunrise (GBR) swept the board in the 2021 Rolex Fastnet Race, winning the world’s biggest offshore race overall. Ed Bell’s JPK Dawn Treader (GBR) was out of luck in the Rolex Fastnet Race, retiring with a broken mast. Both boats were shipped across the Atlantic to take part in what will be their first race in the Caribbean.

Jacques Pelletier’s Milon 41 L’Ange de Milon (FRA) and Andrew Hall’s Lombard 46 Pata Negra (GBR) raced to the Caribbean in the RORC Transatlantic Race, coming second and fourth in class respectively. Two J/121s will be racing; Stuart Dahlgreen will sail Wings (USA) with a crew from Canada and the United States. Peter Lewis returns to the RORC Caribbean 600 with his team on Whistler (BAR).

The top two rated boats in IRC One features a match-up between two Pogo 12.50s. Tim Knight’s Kai (GBR) will race Two-Handed with Chris Swallow. Morgen Watson skippers Hermes II (CAN) for a fifth race, with a full crew, alongside partner Meg Reilly. There is no stopping Bernie Evan-Wong, the Antiguan skipper of the RP37 Taz has competed in every edition of the race and this year the Taz crew includes sailors from Antigua, Great Britain, Ireland and the USA.

A dozen teams will be competing in IRC Two. Ross Applebey’s Oyster 48 Scarlet Oyster (GBR) has won class at the RORC Caribbean 600 a record six times. Richard Palmer’s JPK 1010 Jangada (GBR), racing with Jeremy Waitt will be competing in their third race, having won the Two-Handed class in 2020.

Two Antiguan boats racing in the class are Pamala Baldwin’s J/122 Liquid and Carlo Falcone’s legendary Caccia Alla Volpe, skippered by Carlo’s son Rocco, with sister Shirley in an all-Antiguan crew. America’s Cup winner Shannon Falcone will be on Comanche for the race. Caccia Alla Volpe was Shannon’s first home when he sailed to Antigua as a child with his parents. Peter Hopps will be racing Sigma 38 Sam (GBR) in his 12th race. Sam is the lowest rated boat under IRC, but always makes the prize giving.

Nine Class40s will be taking part this year. The pocket-rocket 40-footers have always featured since the first race in 2009, with some exceptionally close finishes throughout the years.

Charles-Louis Mourruau’s Guidi is one of the latest Class40 designs in the race. The Sam Manuard designed Mach40.3 was commissioned in 2018. Charles-Louis is no stranger to RORC racing having competed in the Sevenstar Round Britain & Ireland Race and the Rolex Fastnet Race.

Brian Hennessy’s Dragon (USA) is arguably the most successful American Class40 skipper having won the Bermuda One-Two, the Miami to Havana and the Marblehead to Halifax races. He will be racing Two-Handed with Cole Brauer.

Morgane Ursault Poupon racing Up Sailing will be taking part in her second race. The 2007 Rogers Yacht Design is one of the oldest boats in the race but was an impressive class runner-up in 2020.

To follow the RORC Caribbean 600, visit the Royal Ocean Racing Club on social media and via the dedicated race website: www.caribbean600.rorc.org where news from the race, images, video and a Live Blog can be found. All yachts will be fitted with a race tracker: https://caribbean600.rorc.org/Tracking/2022-fleet-tracking.html and armchair sailors can take part on virtual regatta.