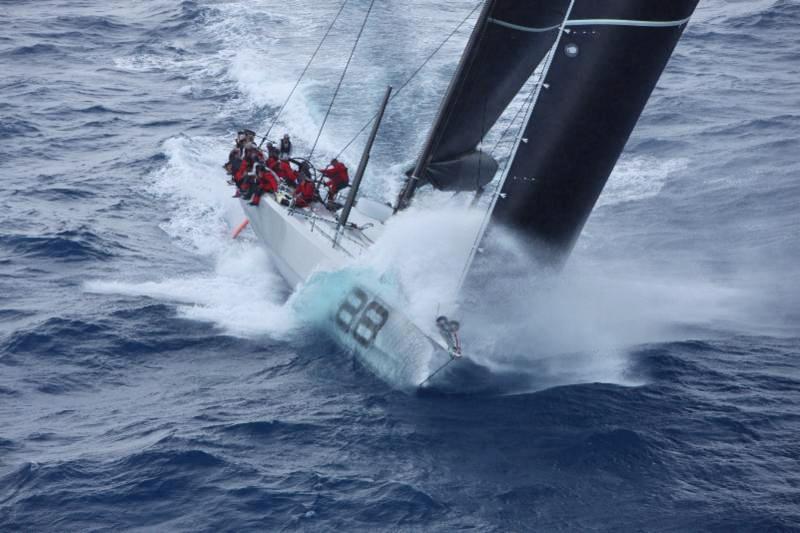 Exhilarating conditions are predicted for the first few days of the RORC Caribbean 600 starting from Antigua on Monday 19th February © RORC/Tim Wright Photoaction.com.

19/02/2018
The 10th edition of the RORC Caribbean 600 is likely to be the fastest and possibly toughest race in the ten year history of the Caribbean 600-mile classic. Over 20 knots is predicted for the first three days, with gusts in excess of 30 knots. A moderate to rough sea state is also forecast, which will add to the exhilarating conditions. The tenth birthday for the awe-inspiring race is set to be bigger than Ben Hur.
A briefing for skippers and navigators was held two days before the start at the Antigua Yacht Club, where around two hundred sailors – including the glitterati of the sport sailing – were in attendance. The RORC Racing Manager Chris Stone highlighted references to World Sailing Special Regulations, as well as details of the RORC Prescriptions for the use of harnesses and lifejackets. With a record fleet, competitors were also reminded to stay clear of the starting area until their scheduled start. For spectator boats an exclusion zone has been created.
At the briefing, a weather update was presented by world class navigator Wouter Verbraak, Head of Sevenstar Racing Yacht Logistics. He confirmed that weather models predict that the first three days of the race will see strong trade winds:
“Strong high pressure over the North West Atlantic is squeezing the trade winds and accelerating the wind speed,” explained Verbraak. “We could see 22-26 knots of gradient winds for three days with a slight decrease forecast on Thursday 22nd February. Competitors should be aware of the potential for squall activity during the race. On Monday evening, squalls could bring 30 knots of wind down to the surface. A significant wave height is predicted with two metres at the start of the race, building to three metres by Wednesday.”
Steve Hayles, navigator on George Sakellaris' Maxi 72 Proteus commented after the Skippers Briefing: “Wouter is spot-on, especially about the squall activity. Understanding what is going on in the upper level of cloud around 850 metres is going to be very important in this race. On a boat like Proteus we are fast enough to have more options, but on some of the other boats they will not have that advantage to avoid the squalls. So my advice is keep a good look out for cloud activity and be ready, especially first thing in the morning and late in the afternoon.”
Following the race briefing, the RORC Caribbean 600 Welcome Party took place at Antigua Yacht Club. Special guests included the Governor General, His Excellency Sir Rodney Williams and Lady Williams, and representing the Antigua & Barbuda Tourism Authority was Operations Manager Ms Donyelle Bird-Browne.
At the welcome party Eddie Warden Owen, RORC Chief Executive Officer introduced RORC Commodore Steven Anderson who will be competing in the race for the first time in his own yacht Gemervescence. The RORC Commodore wished all the competitors a safe race, before introducing Arthur Thomas, Chairman of National Parks, who gave a warm welcome and a rousing speech to the congregation.
The flamboyant rhythm of the Panache Steel Orchestra opened the musical entertainment, while the massive crowd enjoyed a complimentary bar and food. The six piece Antiguan cover band 1761º really got the party going with top hits from the world of Reggae, Soca, Pop, R&B and Dance a bit of Rock “n” Roll!
The RORC Caribbean 600 starts on Monday 19th February. To follow the race and keep up to date with positions go to:-
Tracker: http://caribbean600.rorc.org/Race-Information/Tracking/