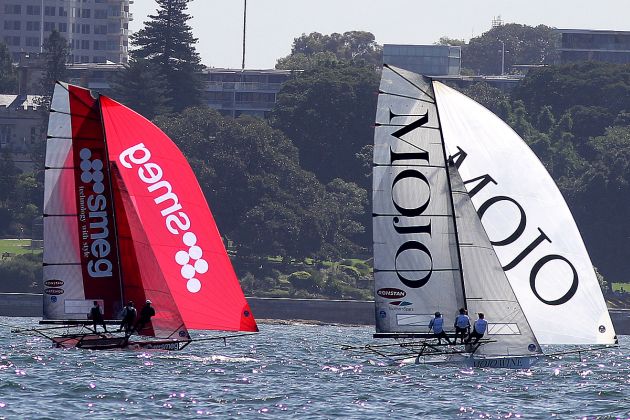 One of the big surprises of the 2015-2016 Sydney 18ft Skiff Season has been the impressive form of a totally rookie Mojo Wine crew, who performed so well at the recent Australian 18ft Skiff Championship on Sydney Harbour. Skipper James Ward, forward hand Phil Marshall and sheet hand Rick Plain came into the 18s from the 16ft Skiff class and took over the boat which was last season campaigned at the club by the crew now sailing Smeg.

Unsurprisingly, the rookie team weren’t expected to be near the top of a highly competitive fleet in the nationals, but their individual race results of 2nd, 4th, 6th, 11th and 12th gave them a sixth placing overall on 23 points, equal with the fifth placed Coopers 62-Rag & Famish Hotel.

With less than one week to go before the 2016 JJ Giltinan 18ft Skiff Championship (sponsored by appliancesonline.com.au) gets under way on Sydney Harbour, we wanted to get some background about this team leader, James Ward, and his crew members.

James told us he grew up sailing on Botany Bay, working his way through Sabots, Flying Ants, MG14s, 420s and 470s, and had the good fortune to spend “a lot of years” under Craig Ferris, a multi JJ Giltinan champion (with Stephen Quigley and John Harris) and a wonderfully successful coach.

James says:  “I grew a bit sick of travelling and competing in these classes, so I jumped into a 16ft Skiff.  It’s where I first sailed with Phil Marshall, who had moved from a 29er into the 16.  I have now been sailing with Phil for around eight years.

“Phil and I crossed paths with Rick Plain while we were sailing out of Middle Harbour Skiff Club and only sailed a handful of races with him in the 16ft Skiffs before moving into the 18s.

“The 16s are a really expensive class, and team budget is a big factor in the fleet.

“One of the attractions to the 18s for us, was definitely the great setup around the boat and the gear.  The restrictions around new gear definitely provides a much more level playing field and this can be seen in how competitive the fleet is.

“We got into 18s knowing it was a three-year plan to accrue gear and be where we wanted to be.  Our goal in our first season was to sail consistently in the top 10 of the fleet, so we are ecstatic with our last few results.

“I had never been on trapeze before and that has probably proved the toughest part of the transition.  Steering downwind from the trapeze in a few of the big NEers we had at the start of the season was certainly an interesting exercise.

“I can definitely say that we have never had so much fun in a class of boat, both in the boat park and out sailing.  Everyone at the League has been so welcoming and helpful, which makes us look forward to coming to sailing each week”.

“My old 16ft Skiff mates on Smeg have been particularly helpful.  They have assisted us setting up the Mojo 18 and we are now looking forward to being a part of our first JJs.

“Mojo Wine, which is part of the Casama Group, have been fantastic.  We got to meet the team over Christmas when they were kind enough to invite us to their Christmas party.”

The company are equally impressed with the young team’s performances so far. The Australian 18 Footers League’s association with the company goes beyond the sailing sponsorship and is also an important part of the licensed club’s bar trading.

League Club Manager, Luke Redmond says:  “The first I knew of the company was when I tasted some wine at a wedding in Tasmania.  I liked what I tasted and decided to track down the distribution company for that particular wine.

“I was impressed by the company (Red & White) under the Casama Group and struck up a personal friendship with their leading man James Hyde, and later with his partner Annie, when they regularly supported the 18s race team from the spectator ferry.

“James and I set up the original Red Claw sponsorship and now the Mojo Wine brand is in its fifth year of sponsorship with Sabino Matera now the company’s representative in control.  It has been a great association for both the company and the club as there has been a continual growth of wine sales at the club.”

With eight races (including Friday’s Invitation Race) to be sailed over ten days, most new teams have improved their boat handling skills in recent years.

Mojo Wine’s crew have already achieved more than we could have expected in such a short time and so the future for this young crew looks a big winner.