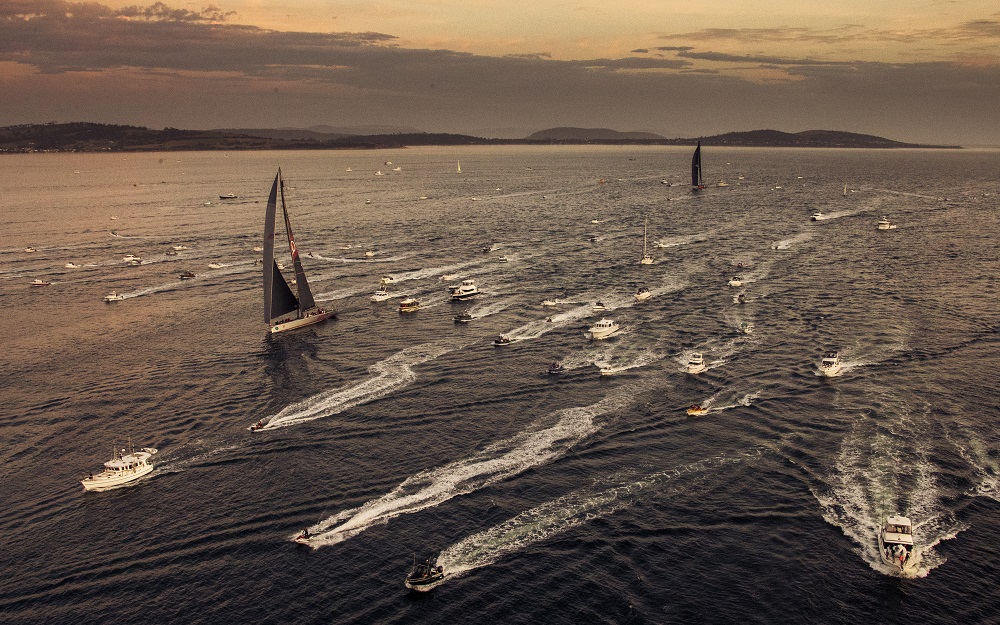 Prospective entrants for the Cruising Yacht Club of Australia’s (CYCA) 2018 Rolex Sydney Hobart Yacht Race have just one week before entries close, when they can join the 80 already submitted, inclusive of a record five super maxis and 12 internationals for the start on December 26.

In the eclectic main fleet, there are boats from either end of the age, size and design spectrum.

Brenton Fischer will keep the Fischer and Ragamuffin names alive, having entered his grandfather’s TP52, Ragamuffin. He missed the race last year, but skippered the yacht in the 2015 and 2016 races.

“I’m really looking forward to doing the race again. We’ll be competitive – I’ll pretty much have the same crew as last time, like Clinton Wade-Lehmann. He’s helping me put the boat and crew together,” said the 34-year-old, whose Hobart debut was 2014 on his grandfather’s super maxi, Ragamuffin.

In the 50-feet range alone, Fischer will face strong field vying for the Tattersall’s Cup, awarded to the overall winner each year. Among the TP52’s are last year’s winner, Ichi Ban (Matt Allen), along with newcomers Matt Donald and Chris Townsend with Gweilo and Gordon Ketelbey with his freshly purchased Zen.

Other 50 footers include decorated international entries; Scott Innes-Jones’ Cookson 50 Privateer from the USA, and Eric de Turckheim’s latest Teasing Machine (III), a NMYD 54 design from France. De Turckheim did his maiden Sydney Hobart in 2015, sailing his Archambault 13 of the same name to 10th overall.

At the other end of the scale is Michael Spies’ Mark Twain, which up until 2008 (when it was equalled by Impeccable), held the record for the yacht with the most Sydney Hobarts – 25.

Explaining his passion for the 47-year-old S&S 39, Spies said: “As a teenager, I always admired it (Mark Twain) and Improbable. They were my favourites – I had pictures of them on my bedroom wall.

“Robby Case found Mark Twain in Melbourne. He rang me up and we did the deal. It’s been unloved for a fair while. We’ve done a lot of work to it, but it’s still a work in progress – I like my boats to look good,” said Spies from Melbourne where the boat is being brought up to scratch.

And in another twist, Spies says: “Robby’s dad, Bernie Case, sailed it in the One Ton Cup when it was skippered by Jock Sturrock (a legendary Australian yachtsman). It also won the CYCA’s 1979 Sydney Noumea Race.

“It’s the sistership to Pilgrim (now Jon Sanders’ Perie Benou). Both were built by Doug Brooker. Ron Langman, who commissioned the boat, also commissioned Komatsu Azzurro,” he says of the S&S 34 now owned by Shane Kearns who is entered again this year.

Case, who has sailed a few of his 33 Sydney Hobarts with Spies (who has done 41), will join him on Mark Twain. The two veterans are amongst the four youngest ever to achieve 25 races. As a co-owner, Spies has previously taken line honours (Nokia in 1999) and won overall (First National in 2003), while Case won it as crew on Ausmaid in 1996.

To win the 628 nautical mile race with an older boat built to the IOR rule, Spies says: “We need it to be a reasonably slow race – if it’s a fast running race, we’ll just out there for the sail.”

The Queensland yachtsman will not be alone in wanting a slow race. Two other vintage Sparkman & Stephens – the 1981-built Komatsu Azzurro and the famous 54 year-old Kialoa II will join him. Brothers Paddy and Keith Broughton purchased the latter boat last year and finished the race 56th overall after the boom broke. Kialoa II had sailed here once previously, taking line honours in 1971 when owned by American, Jim Kilroy.

Every size range is represented in the Rolex Sydney Hobart, with entries coming from every Australian state and overseas.

Record holding Wild Oats XI (the Oatley family), InfoTrack (Christian Beck), Scallywag (Seng Huang Lee) and Black Jack (Peter Harburg) are signed on and ready to do battle with Jim Cooney and Samantha Grant’s Comanche again. All but Scallywag contested the race last year. The spectacle of five super maxis is sure to be a crowd-pleaser.