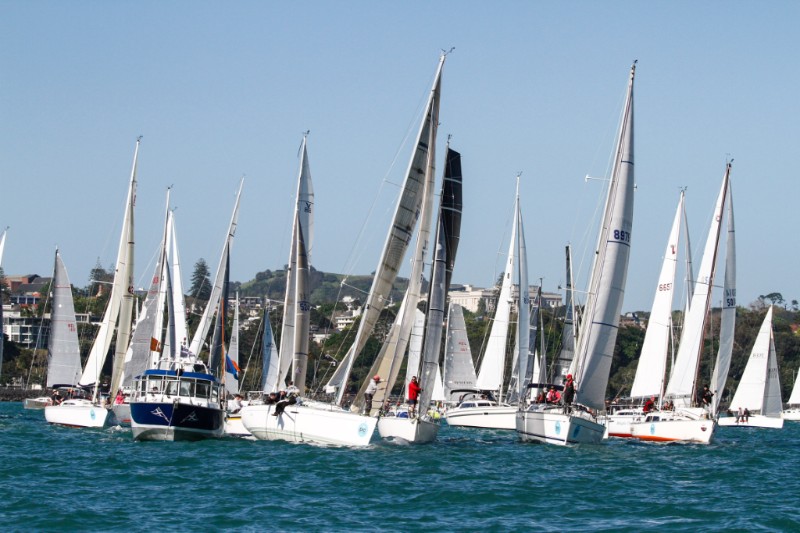 Off the start in the Coastal Classic

The Waitemata put on a dazzling display of sailing for spectators of the 36th PIC Coastal Classic yacht race this morning, with 165 boats starting the epic journey from Auckland to Russell in the Bay of Islands.

Every year since 1982, this race marks the start of the boating season and with today’s sunshine and steady easterly, anybody could have been fooled for summer.

Shortly after 5:00pm Friday, with an elapsed time of 7 hours 8 minutes, Frank Racing (formerly Team Vodafone Sailing) took their eighth victory. On their giant Orma 60 trimaran, they have won every race since 2010 except for 2013’s race when Team Australia, an identical boat stole the spotlight.

At the time of writing, Frank Racing is the only boat across the finish line, and the 2nd place boat isn’t expected until closer to midnight.

“It was pretty light the whole way up here” said Simon Hull, owner and skipper of Frank Racing. “It got quite light off Kawau and then we had to do a couple sail changes up to our big Code Zero until the breeze filled in a bit.“

Hull continued to detail their race up the coast: “We went out round Hen and Chicks on a two sail reach all the way to Cape Brett, and then it was a smooth run in from there.

“It’s not very often that you do the PIC Coastal Classic without having to put a reef in the sail,” he said about the relatively uneventful race. “It was all pretty much as per forecast and there weren’t any surprises”.

Kotuku and Cation are the next two boats expected in to the finish line, both multihulls. The first monohulls are expected to be the new 66’ Awen, and TP52s Mayhem and Wired (with Peter Burling helming).

All information and tracker: www.coastalclassic.co.nz/watch