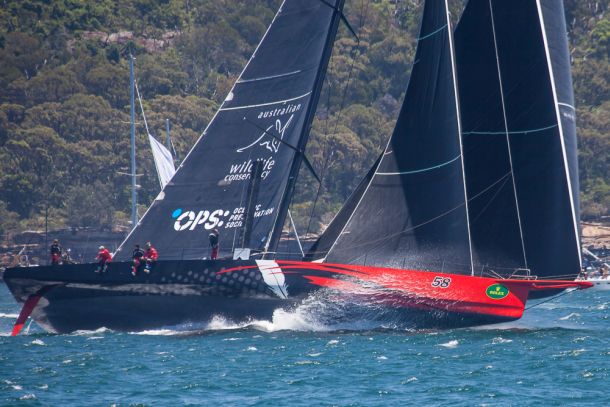 Comanche streaks away from the start of the 2014 Rolex Sydney-Hobart. Photo Cathy Vercoe/luvmyboat.com.

The Cruising Yacht Club of Australia today announced the release of the Notice of Race for the Rolex Sydney Hobart Yacht Race and invites eligible yacht owners to enter into Australia’s premier blue water event.

Now in its 71st edition, the CYCA is predicting an international fleet of approximately 90 yachts will take part in the 628 nautical mile race, which starts on Boxing Day, December 26 at 1pm AEDT.

Bob Oatley has indicated that record holder and defending line honours champion, Wild Oats XI, will lead the charge for line honours again. This following massive modifications to keep pace with the newer yachts, such as Comanche, the year-old super maxi owned by Jim Clark and Kristy Hinze Clark, who have found the lure too strong to resist returning this year.

Others that could be enticed include George David’s December launched all-carbon maxi, Rambler 88 and Syd Fischer’s Ragamuffin 100. Anthony Bell, keen to test the improved light weather performance of Perpetual Loyal against all comers, has confirmed his super maxi will take part. For the same reason, Peter Harburg is keen to see his V70, Black Jack, on the start line.

Wild Oats XI and her crew have demonstrated again and again how effective they are. In last  year’s race, Mark Richards skippered the yacht against their most intimidating competition yet, when four other hot 100 foot super maxis targeted the record holder, which went on to post the fastest time in the Transpac Race in July.

Most feared of last year’s rivals was the new Comanche. Dubbed the ‘aircraft carrier’ because it is almost double the width of Wild Oats XI, Comanche dwarfed her rival. By hype alone, the US boat and her red-hot crew must have psychologically tested the Wild Oats XI crew, but they remained unbowed and did not surrender.

Oatley’s boat also defeated a second US yacht, RIO 100, owned by Manouch Moshayedi. The former Lahana had been under the knife and lengthened from 98 feet to 100. Two local super maxis were a newly hulled Ragamuffin 100 and Perpetual Loyal, the highly credentialed and revamped former Rambler which suffered hull delamination and retired on the first morning at sea.

Launched in 2005, Wild Oats XI took the treble of line and overall honours and race record in the Rolex Sydney Hobart that year. In 2012 she knocked 16 minutes 8 seconds of her record, setting a new benchmark of 1 day 18 hours 23 minutes 12 seconds. In 2014, she set a new record of eight line honours victories in the race, beating Morna/Kurrewa IV’s long-held record of seven during the 1940's and 1950's.

Tattersall’s Cup for the overall winner

Disposing of all challengers, particularly Love & War and Maluka of Kermandie, which pursued him to the finish line, Roger Hickman won his third overall victory in 2014. It was the second with his ageing Farr 43, Wild Rose, formerly Bob Oatley’s earliest Wild Oats.

Hickman has acknowledged he will be back with the 30 year-old yacht and the usual blend of male and female crew that works so well for him, as he makes his fourth bid for the Tattersall’s Cup. Awarded to the overall winner each year, it is the most coveted trophy in the race.

Another older, but revamped yacht expected on the start line, is Shane Kearns’ Quikpoint Azzurro, the S&S 34 he sailed to victory in the CYCA’s Land Rover Sydney Gold Coast Yacht Race in July. At the modern end of the scale, Chinese Whisper, the JV62 which finished second overall to Quikpoint Azzurro, will also compete.

Rupert Henry purchased the former Jethou out of Europe and launched it in Sydney five weeks before the Gold Coast race. Chinese Whisper impressed in its maiden Australian outing and will rate among the favourites.

Commenting on the upcoming race, CYCA Commodore John Cameron said: “High calibre entries are again expected from around the globe for our 71st race. At the large end of the fleet we anticipate line honours contenders that should rival past years.

“The Rolex Sydney Hobart Yacht Race is an Australian fixture. It has the public spellbound from the 26th of December every year. Rated in the top two most watched sporting events in Australia, interest grows stronger each year,” the Commodore ended.

Yacht owners and their crew who meet the Corinthian criteria, as defined by the ISAF Classification code, can compete for the York Family Corinthian Trophy again.

Newly dedicated by prominent CYCA members Michael and Jeannette York, to commemorate the CYCA’s 70th anniversary and its 70th Sydney Hobart race last year, the highly prized Corinthian trophy was won by She’s The Culprit, owned by the Culprit Syndicate, who are likely starters again.

The trophy will be presented to the yacht that performs best overall under a separate performance handicap to be calculated by the application of Time Correction Factors (TCFs) as a multiplier of elapsed time. Yachts entered in the Corinthian division must also be entered into one of the other three divisions: IRC, ORCi or PHS.