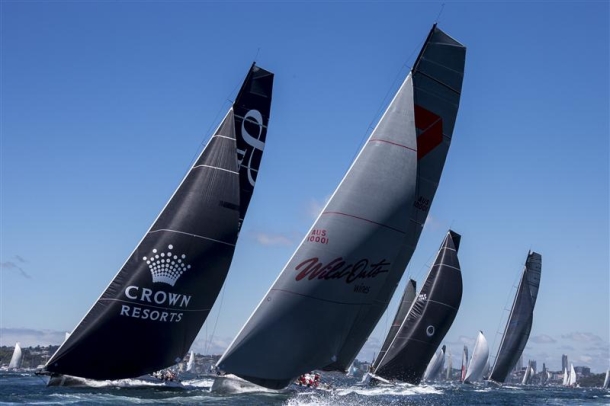 Maxis at the start of the 2013 Sydney to Hobart Yacht Race. Photo Rolex/Carlo Borlenghi.

This is an edited version of an opinion piece in the December-January issue of Australian Sailing magazine. For the full article and responses from the CYCA and leading Sydney-Hobart sailors, buy an electronic copy of the magazine (see below) or get a copy from your local newsagents.

There is an old adage that says ‘if it ain’t broke, don’t fix it’. But there is an equally compelling saying that states ‘you don’t have to be sick in order to get better’.

No-one is suggesting the Rolex Sydney Hobart is sick. The 2014 race attracted 117 entries which was the first time more than 100 boats had fronted the starter since 2008 (113). At time of writing, entries had closed for the 2015 race with 111 yachts to face the starter and the more than 500,000 people who will be watching from every vantage point on Sydney Harbour.

Between 1979 and 1990 there was an unbroken run of entries exceeding 100. For the 50th running of the race, entries totalled 308, indicating the probable “universe” that the race has to draw upon.

The event attracts excellent media coverage for the sport, the only time the mainstream media covers sailing with the possible exception of the Olympic Games, if Australia is winning medals.

However, as soon as the maxis have finished (in two days), event coverage fades away. A very common criticism from “ordinary” sailors is that Wild Oats and the other maxis get all the coverage and the “real winner” is an afterthought.

Is there a way we can change that fact, and make the race even more appealing?

Many of the great offshore races around the world, including the Fastnet, the Transpac and the Marion-Bermuda, have a staggered start, where the smaller boats leave first and the Maxis play catch-up.

If handicapped well, this results in a very tight and exciting finish. You can imagine the tension if a little boat like Maluka was a few hundred metres from the finish line and Wild Oats or Comanche was hammering up the Derwent under spinnaker, trying to pip her at the post.

Another advantage we identified for this approach would be that, because numbers at each start would be smaller, the start line could be moved further into the harbour, allowing the Opera House and Bridge to be used as backdrops and providing better viewing platforms for spectators.

Interest in the race would be maintained for five days instead of the current two days. This would give much greater exposure to the smaller boats in the fleet.

The celebrations in Hobart would be more meaningful to the crews, as everyone would be in town at the same time. At present, the crews of the big boats are often back home before the overall winner arrives.

However, when I ran this idea past the race organisers and various race legends I got a resounding “no.”

(To read the comments from Matt Allen, Tony Cable, Sean Langman and the CYCA, buy a digital or paper copy of the ,magazine.)

OK, so no-one wants to go to a staggered start. But what about the handicap system? There is no doubt that IRC is a flawed rule that doesn’t make any consideration of the conditions that prevail during the race. Depending on when and where conditions change, one division is always over-represented at the top of the IRC leaderboard.

Last year, six of the top 10 finishers on IRC were from Division 3. The first Division 1 boat was 9th and the second was 28th. You had to go right down to 44th place to find the first Division 0 boat. The results were much more about the conditions each division sailed in, rather than which boats were sailed to their best potential.

IRC works best for windward-leeward racing. In an ocean race like the Sydney Hobart, where conditions change continually, IRC just doesn’t throw up a fair result. Now that velocity prediction programs are becoming more accurate and more wide-spread, is it time to look for a better rule for the Sydney Hobart?

In 2004, three major yacht clubs – The Chicago Yacht Club, the Cruising Club of America and the Transpacific Yacht Club – joined forces in an alliance called the Offshore Racing Association (ORA). The ORA was formed “to promote and support the use of VPP-based handicapping and develop a new measurement-based rating rule that provides the fairest handicapping possible”.

The organisers of the Marion-Bermuda Race claim the Offshore Racing Rule is a fairer way of handicapping boats of different ages and sizes. And because the algorithms inside the VPP are not publicly available, the ORA claims it’s impossible for designers or owners to optimise their yachts to gain an advantage under the rule.

The winner of the Tattersall’s Cup for overall honours in the Sydney Hobart shouldn’t be decided by when conditions change. It should be awarded to the yacht that was sailed to the best of it’s potential for the entire duration of the race. Whether the ORR is the solution or merely a stepping stone to an even better VPP-based system, I think it’s a subject the CYCA should take seriously.

In the current computer era, we shouldn’t be hearing things like, “Oh well, looks like it’s a small boat race again this year” on the dock prior to the start.

Following the lethal 1998 race, the CYCA has led the ocean racing world in safety initiatives. Its charity, the SOLAS Trust, has raised around a million dollars to equip safety organisations in all states with improved equipment. There is no question that safety is an aspect on which the club can’t be faulted.

However, I believe the Sydney Hobart is the last major ocean race in the world to insist on HF radios for every entrant. At around $5000, it is an expensive item and I believe serves as a disincentive to entry. In the past the club has claimed that the reason for HF is because a broadcast to all yachts is possible. However, this option is also possible as a text message via satellite phone, with the added advantage that the message is retained. Sat phones are now compulsory for the race, so should the requirement to also have an HF radio be removed?

The CYCA has discussed the idea of including multihulls in the race and has decided not to. A committee set up to investigate the concept reported that the club members were monohull sailors and there was no need to include multihulls.

Yet there is no doubt that multihulls are the major growth area in sailing. At race weeks all around the world, the multihull division is the fastest-growing.

All the major sailing events in the world – the America’s Cup, the World Match Race Tour, the Extreme Series – are raced in multihulls and ISAF was forced to reinstate the multihull to the Olympic program owing to the growth of interest.

All the major offshore races, including the Fastnet, now accept ocean racing multihulls. But is Australia ready for them?

Again, a man whom I expected to support the inclusion of multihulls, Sean Langman, was very circumspect about the issue.

“The multihull question is complex. Currently there is only one Cat 1 compliant multihull in Australia (Sean’s own ORMA 60). The multihull fraternity in Australia do not have a grasp on reality when it comes to offshore requirements. To have a multihull entrant capability I would urge it would be restricted to the very large international professional teams.”

You can read the rest of Sean's comments, including the need not to offend the owners of the large maxis, in the magazine.

So according to those who know the race best, it’s in very good shape and doesn’t need tinkering with. However, I refer them to my opening comments about not needing to be sick to get better.

I hope this article will stimulate discussion over a few beers in various yacht club bars around the nation. I expect to have a number of people come up to me before the race to tell me I’m an idiot.

If this great race could attract more than 300 entries for its 50th year, surely a target of at least 200 for “ordinary” years is very achievable. But only if the cost of entry is reduced (drop the HF radios) and the public interest is maintained.

Get the digital copy here: https://itunes.apple.com/au/app/australian-sailing-+-yachting/id561365591?mt=8