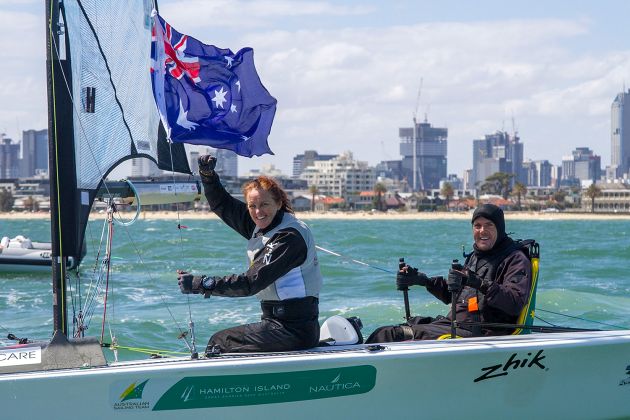 The highlight of today's racing at the Royal Yacht Club of Victoria in Williamstown, Australia, was the performance of Dan Fitzgibbon and Liesl Tesch in the SKUD18 fleet. At the Para World Sailing Championships the pair racked up another two wins to wrap up the World title with one race still to go.

They withstood enormous pressure from the Dutch crew of Rolf Schrama and Sandra Nap, clinging to a narrow lead at the beginning of the last downwind leg to cross the line just nine seconds ahead of the plucky Netherlands team.

In the second race of the day, in winds that increased to more than 15 knots, it was the Polish crew of Monika Gibes and Piotr Cichocki who hassled the Australian all the way, but once again, Fitzgibbon held his nerve and the Polish crew trailed them by just seven seconds in one of the most exciting finishes in the series.

Their two victories today places the Australians in an impregnable position at the end of the day, with a total points score of 11 after dropping their worst score – a third.  Even if they do not sail in the final race tomorrow, they cannot be beaten for the World Championship.

Trailing the Australians on the leader board are the British crew of Alexandra Rickham and Niki Birrell, who sailed consistently today to score two thirds and now have a total of 26 points. Third is the Italian combination of Marco Gualandris and Marta Zanetti with 39 points. The Dutch team, with their second and seventh places today still have a chance to displace the Italians, lying just three points behind them at this stage.

It was a different story on the Sonar course today, where the usually consistent Australian crew of Colin Harrison, Russell Boaden and Jonathan Harris really struggled to find any rhythm.  They experienced problems yesterday, which were mainly due to really tough weather conditions and huge swings in wind direction.  Today's racing was in stronger breeze, with lesser swings, but particularly in the second race, big seas were challenging for all crews on the windward legs. The Australians were 13th in race 9, their worst result so far, and 10th in race 10.

If conditions were hard, it certainly did not worry the British crew of John Robertson, Hannah Stodel and Steve Thomas, who came away with second and third places from today's races to lead on the points score table with 31 points.  With their worrying day today, the Australian crew loses its place at the head of the leader board but remains in a podium position with French team of Bruno Jourdren, Eric Flageul and Nicolas Vimont-Vicary.

“We struggled for boat speed all day today,” said Australian skipper Colin Harrison, “Boats that were behind us at the start were beating us to the windward mark.” Coach Grant Alderson will be trying to return his team to the routines that brought them success in the early part of the regatta.

In the 2.4mR fleet, Frenchman Damien Seguin has improved at every outing.  He sailed consistently early, but has been increasingly dominant in this fleet at every race. He was unflappable today despite the pressure being heaped on him in the early stages in each race, finding his way to the front by the first mark and then extending his lead to finish the day with two firsts. Australia's Matt Bugg scored a second in race 9 and was right on Seguin's tail for most of the race but could not find a passing lane. He was fifth in race 10. Germany's Heiko Kroeger sailed consistently again for third and fourth placings to remain second on the leader board with 28 points, 10 behind the Frenchman.

Helena Lucas will rue the “U” flag disqualification she incurred on the first day. With a 10th place as her worst score, she may well have been in a podium position at this stage and has sailed consistently near the head of the fleet in every race.

Seguin can go into the final race tomorrow full of confidence with a ten point buffer over his nearest rival.

Conditions for tomorrow are forecast to be much lighter than today and racing will be followed by the presentations in the evening.