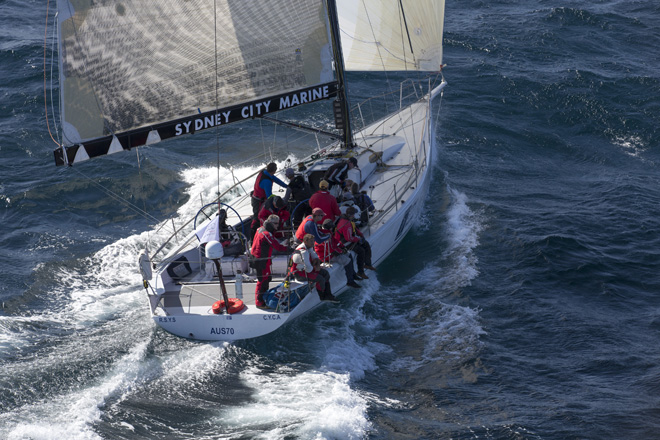 A strong fleet of 32 yachts, all aiming at Rolex Sydney Hobart glory, will be on the start line of the Cruising Yacht Club of Australia’s 85 nautical mile Bird Island Race, due to start on Sydney Harbour at 10am on Saturday.

Heading the fleet of the penultimate race of the Blue Water Pointscore (BWPS) is series leader, Balance, owned by Paul Clitheroe. The TP52 led the BWPS last year, poised to take the title until Sam Haynes’ Rogers 46, Celestial, closed the gap and robbed her of that chance in the 628 nautical mile Sydney Hobart – the final race of the series.

Not involved in the BWPS, but one of the favourites to take out the Sydney Hobart in December is Indian, Craig Carter’s Carkeek 47 from Western Australia. She showed promise when Carter took delivery of her last October, finishing fourth in the Bird Island Race and going on to place 38th overall in the Hobart.

Fresh to the line is Syd Fischer’s TP52 Ragamuffin, with grandson Brenton at the helm. Despite entry into earlier races, Ragamuffin did not make it to the start lines, so this will be his and the boat’s first competition since the younger Fischer announced he would be skippering the yacht in the upcoming Sydney Hobart.

Others who have thrown their hats in the ring include some of the 10 TP52’s entered for the Hobart this year. Sam Haynes will be there with his latest Celestial, Mick Martin has brought Frantic from Lake Macquarie and Matt Allen, yet to decide between his Carkeek 60 and his TP52 for Hobart, has entered his TP52 for the race after taking the line and overall win in the Cabbage Tree Island Race in late November with his Carkeek 60.

Helsal 3, one of just two Tasmanian entries in the big race south on Boxing Day, is entered and will be skippered by co-owner Rob Fisher. She will battle for PHS honours with David Pescud’s Kayle-SWD, Murray Owen/Jenny Kings’ Mahligai and BWPS PHS leader, Wax Lyrical, an X-50 owned by Les Goodridge.

The penultimate race of the Cruising Yacht Club of Australia’s Blue Water Point Score (BWPS) starts on Saturday at 10am on Sydney Harbour. It could make or break the fortunes of those with hopes of winning the Club’s prestigious event, which is ultimately decided by the non-droppable Rolex Sydney Hobart in December.

This weekend, competitors will be racing for the 59th Janzoon Trophy, while those contesting PHS glory will race for the 40th George Barton trophy.