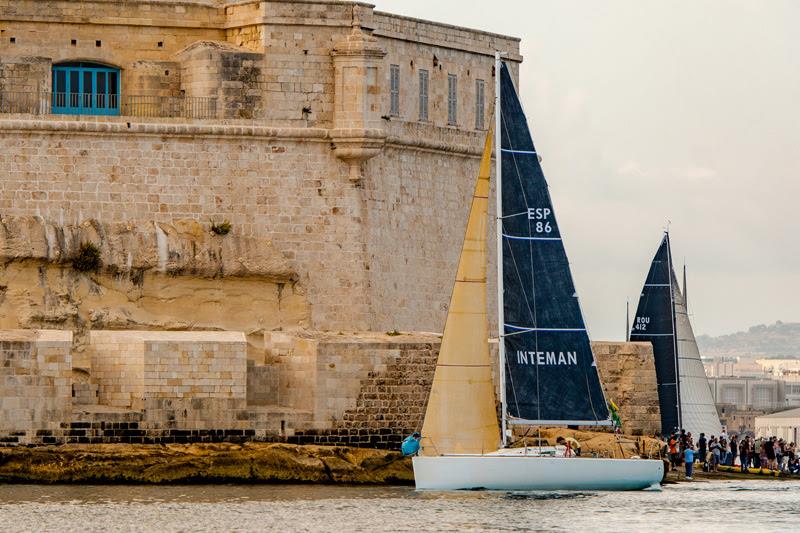 The 40th Rolex Middle Sea Race is almost done and dusted – just two boats remain on the course, including the only surviving multihull – and both should finish by the race cut-off time of 08:00 CEST, Saturday, 26 October.

It is perfect timing for heading to the final prize giving, scheduled for Saturday lunchtime at the Mediterranean Conference Centre, the former hospital of the Knights of St John, which promises to be a rousing affair.

The result of one more class was determined this morning, as yachts continued to complete the course overnight. The Double-Handed Class was won on the water and overall by Daniel Martín and Didac Costa on the Figaro II, Inteman (ESP). In other major news, JYS Jan (MLT), the first all-female crew to participate in the 606nm offshore classic, has also arrived back in Malta.

This was Daniel Martín's first Rolex Middle Sea Race. His Inteman team-mate, Didac Costa, is highly-regarded in Spain. He competed in the Barcelona Round the World Race, sailing double-handed, and the 2016 Vendée Globe, racing solo around the world in just under 109 days.

Both sailors are from Barcelona, and spoke about their win in the 2019 Rolex Middle Sea Race. “I have done races of 500 miles or so, but this was a bigger challenge, and to see all these islands was new for me,” commented Martín.

“During the race, I did more of the sailing and left the tactics to Didac.”

In the first few days of light wind racing, the pair made what turned out to be a good tactical choice. “In general, we concentrated on making good speed to the next waypoint rather than trying to compensate for the forecast,” Martín said. “This was the right decision because many times the forecast did not turn out to be correct.”

Once around Favignana, the race became more physical in the difficult upwind conditions. The double-handers were resolute in their perseverance. “The last three days we had to be strong mentally because it was very, very hard,” he admitted.

“This is my third Rolex Middle Sea Race, but my first double-handed,” Costa commented. “It is a race where the conditions are always changing, which makes it very interesting.

“We did not use the auto-pilot a lot, especially the last part upwind from Favignana to Lampedusa when the sea was chaotic. We were changing the helm every two hours, which was very tiring.”