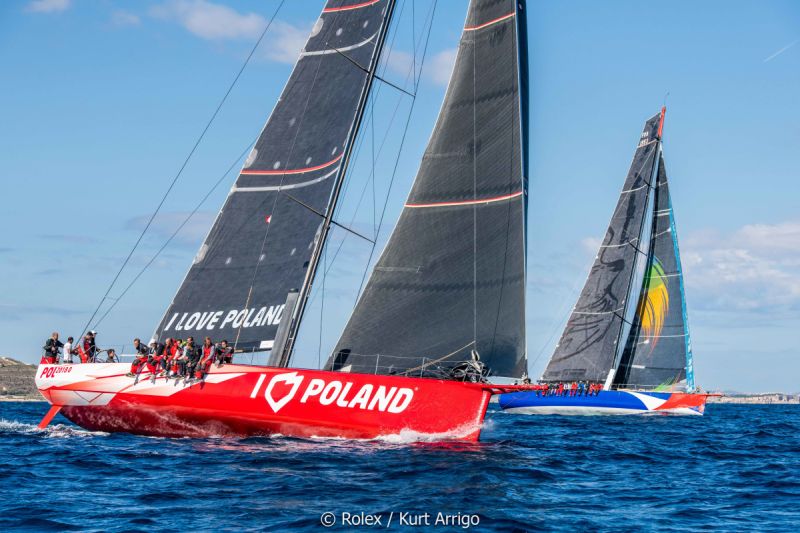 What a day! No one following this year’s Rolex Middle Sea Race had foreseen that two 70-foot ocean-racing maxis would match race the final 10 nm to the finish line to decide the monohull line honours title of the 41st edition of the 606 nm classic offshore. Even late last night, this appeared an unlikely scenario. For the two yachts concerned, both from Poland, it was a fairy tale ending with the winner only decided in the final few miles.

In the end, it was I Love Poland, owned by the Polish National Foundation and skippered by Grzegorz Baranowski, that outmuscled their compatriots, the largely Corinthian crew from the Yacht Club Sopot near Gdansk, on E1, to secure the prize. I Love Poland had held the race lead virtually all the way from the very start, but when the two VO70s entered the South Comino Channel, at the north western end of Malta, just before 1000 CEST, the unfancied E1 had the temerity to take the lead. It was a short-lived moment of glory, as I Love Poland took the gun by a mere 3 minutes after four days of racing.

“We are very happy. It was a combination of perfect crew work, perfect navigation and a bit of luck,” said a clearly fatigued Grzegorz, shortly after stepping ashore. “It was really tough from the beginning, with a lot of tacks at the end.”

Despite a weather forecast that looked to favour the lighter boats, Grzegorz and his team of young sailors, mostly under the age of 30, were confident that if they did their best they could prevail.

“When we saw the forecast, we knew there was going to be one or two real light spots,” recalled Grzegorz, a member of Karol Jablonski’s 2002 Match Race World Championship winning crew. “But that didn’t mean no wind. When we passed the first spot, we said ‘okay guys, probably only one more.’ But then it was one more, then another one more, and then another… We did it, but it was really frustrating sitting with no wind, lot of waves, the sails flapping.”

For Johannes Schwarz, owner of E1, it had been a great contest. “I am super happy because we are probably the only pro-am team among the leading boats,” commented Johannes. “Only three professionals on board and the rest of the crew were members of the Yacht Club Sopot. We had a great spirit and our skipper, Zbigniew Gutkowski, is a brilliant tactician.”

A quick look back at the records suggests this is the first ever line honours success for a Polish boat at any of the classic 600-mile races, which include the Rolex Sydney Hobart, Rolex Fastnet and Newport to Bermuda.

“It was an amazing day for Poland,” enthused Johannes. “Of course, we would like to have won line honours, but seeing our colleagues winning on I Love Poland makes us really happy.”

As well as congratulating his fellow competitors, Johannes was quick to applaud the Royal Malta Yacht Club for putting on the race: “I hope this proves a good example for other organisers. If you organise the event in the right format, it is possible. Sailors love to race.”

“We really didn’t expect that kind of fight right at the end,” continued Grzegorz. “Our boat is a special government programme for young sailors to learn offshore sailing. For them this has been a perfect experience. They now know you have to fight to the end. They will remember this for ever.”

The young crew of I Love Poland had a secret weapon in its midst, the talented French sailor Benjamin Schwartz, recent winner of the EUROSAF Mixed Offshore European Championship with Marie Riou and a member of the Spindrift Racing team. Onboard as navigator, this was his third time round the course. Benjamin was clear this would be a difficult race.

“I knew it would be long with a lot of gates, park ups and restarts with regrouping of the fleet,” explained Benjamin. “I knew that each time we made gains we would also make losses. It was going to be hard on the nerves. It makes it even more beautiful to win.”

There were a number of key points in the race. “The first was Messina,” Benjamin remarked. “We had the current against us so we could not make the gate. Then, we managed to get away thanks to a cloud that pinned others to the shore. It was a bit complicated across to the Egadi Islands. We made a big gain rounding Pantelleria, escaping the wind shadow nicely. Then last night was horrible. There was no wind for hours. We were match racing Wild Joe, which had done a brilliant race to that point, and then E1 did a nice move that we could not control. But it came good in the end.”

While the monohull line honours battle may be over, the war for overall winner is far from won. As we close for the evening, only eight of the 38-boat IRC fleet have completed the course.

Currently heading the leaderboard,  is the French yacht Tonnerre de Glen, owned by Dominique Tian, which finished at 1501 CEST, bumping Freccia Rossa off top spot. Tonnerre look unbeatable in their class, IRC 3, which puts them in a good position for the all-important overall win. However, with so many yachts still at sea, and some with clear potential to unseat them, the crew has a tense wait ahead, taking nothing for granted.

According to Eric Dahar, the boat captain, it was a fantastic race. “It is our third Rolex Middle Sea Race,” he explained. “Our first goal was to continue to perform, because we have won our class both times previously. Our other goal was to take our opportunities if the weather was good for us. We have done that and now we need to wait.”

Looking back down the course, according to times at the Lampedusa transit point, one of Tonnerre’s biggest threats is the Maltese yacht Elusive 2. Jointly skippered by the Podesta siblings and winner of the 2019 Rolex Middle Sea Race, the Beneteau First 45,  racing in IRC 5, scraped around the lonely outpost 40 minutes inside Tonnerre’s corrected time at the same point. Elusive, the clear leader among the Maltese contingent on the water, is now on the long leg back to the Malta archipelago with about 75nm to the finish. Yet another exciting finish is in store.

MOCRA
All multihulls have finished the race, with Christiaan Durrant’s Shockwave (AUS) the last across the line at 0740 CEST this morning. Riccardo Pavoncelli’s Mana (ITA) maintained her position at the top of the corrected time results to win overall from Maserati Multi70 (ITA) and Shockwave.

IRC 1
Four of the five boats in this class have completed the course. Sisi-The Austrian Ocean Race Project is the last out at sea with about 35nm to run. Aragon, the Marten 72, entered by Andries Verder and Arco van Nieuwland, leads the class from Wild Joe (HUN) and I Love Poland.

IRC 2
Again, four out of the five boats have finished, with Jean Pierre Dick’s The Kid Mermaid 35nm off the finish. Louis Balcaen’s Belgian ClubSwan 50 Balthasar looks to have secured the class ahead of Vadim Yakimenko’s TP52 Freccia Rossa (RUS) in second and Eric de Turckheim’s NYMD54 Teasing Machine in third.