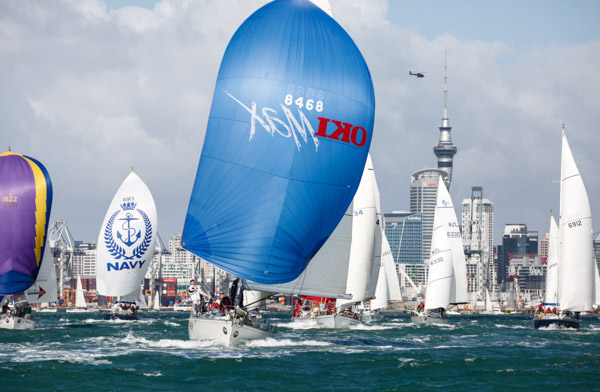 Auckland, 21 October 2020 – Friday’s PIC Coastal Classic yacht race is not looking to be one of the fastest on record, but a strategic battle up the coastline with plenty of opportunities for the 175 competing boats to make big gains or big losses.  With light North to North East winds forecast for the 119 nautical mile race from Auckland to Russell, experts say that this race will be a tactical and complex 'uphill' race in to the wind.

Last year, team Beau Geste sailed the iconic coastal race in their giant Mod 70 Trimaran in exceptional conditions to set a new speed record of 5hrs 13 sec, but this years’ top boats are expected hours after that. Starting from 9:30am on October 23rd in the vicinity of Devonport Wharf, competitors have until 3pm Saturday to finish, and it looks like the smaller boats especially will need all the time they can get.

Earlier this week, one of the most illustrious inshore and offshore sailors of our time and CEO of Doyle Sails, Mike Sanderson, shared his great advice for the race ahead to hundreds of intently listening competitors.

“You have to keep asking yourself, where are we racing to next? The answer is not Russell” Mike says about one of the keys to being successful in a tricky endurance race like this.

He explained that the race is best to be broken into smaller sprints, the first one being how to quickest get off the start line (with 175 boats beside you), with clear air in your sails and out to the  Rough Rock marker buoy just past Maungauika/North Head. As is customary for this event, spectators lining the shoreline will be treated to the parade of boats jostling to get past this point.

“You’ve got to think of Rough Rock as your exit gate from the starting area” Mike says. “Competitors should do all their pre-race prep to get through this first few minutes after the start, as that sets you on the right foot for the rest of the race.”

Mike shared a story about how he got “pipped” by Alfa Romeo on the start line of the Sydney to Hobart one year, and never got the opportunity to catch up. The rest of the race, he says, is anything but plain sailing up the Northland coastline.

“Whatever your plan is, the most important thing is to race with the same intensity from the start to Rough Rock, all the way to Russell”.

“There’s a reasonable chance that most of us will have a long starboard tack up the coast in the afternoon, into the evening, and through the night” Mike continues. “This takes good thinking and planning in advance, and non stop concentration. This is the time to work on boat speed; it’s finesse of trimming and accurate driving in a time when people start to get sleepy.”

Mike Sanderson was joined by Nick Olson of PredictWind, the world leader in wind forecasting, who talked through the wind models to the seriously focused crowd.

“The most important thing is for competitors to make their decisions off the most recent forecast,” says Nick.  “The best forecast is the most up to date one”.

Crews of the 175 entered boats, will be hanging on and watching the forecast over the next 24 hours until the race, with high hopes that the northerly wind tends slightly more east for a more comfortable and faster race north.

The PIC Coastal Classic is the annual event that signals the start of the summer boating season. Sailed every Labour weekend since 1982, the New Zealand Multihull Yacht Club event has grown into much more than a yacht race, with now over 25 boats taking part in a non-competitive 36 Degrees Brokers cruising rally division too. The event is made possible only with thanks to primary sponsor PIC Insurance Brokers and a loyal team of long-standing event partners and many volunteers.

Family and friends can follow the race on Friday morning from 9:30am with live streaming of the start, and yacht tracking by PredictWind online www.coastalclassic.co.nz