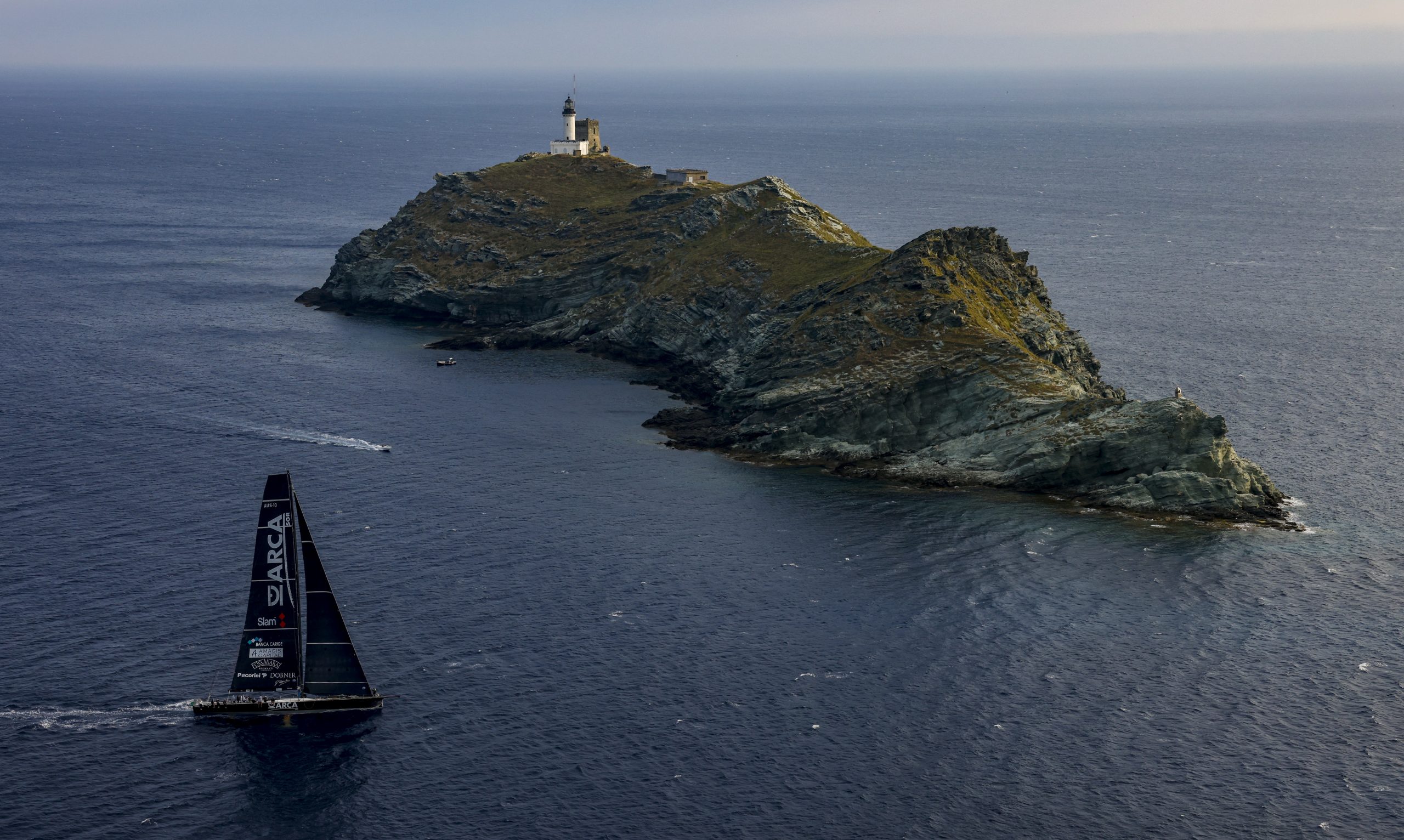 Since setting off from Sanremo, Italy at midday yesterday, a tough contest for maxi yacht line honours has been playing out in the Rolex Giraglia, the fourth event of the International Maxi Association’s Mediterranean Maxi Offshore Challenge.

Overnight, as crews clawed their way towards the Giraglia rock, the entire fleet was subject to a massive meteorological game of snakes and ladders with the wind fading to the west of northern Corsica.

After a slow start, when they were third to the weather mark behind Magic Carpet Cubed and Leopard, the 100ft Arca SGR finally pulled ahead at the inshore mark off Ventimiglia. As the fastest maxi in the fleet (based on her IRC rating of 1.847), she led for the remainder of the race, despite Sir Lindsay Owen-Jones’ Wallycento Magic Carpet Cubed constantly nipping at her heels.

The passage across to the Giraglia Rock was difficult with a shift from the northeast to east southeast initially failing to materialise.

Instead, the wind dropped allowing Magic Carpet Cubed to eat into the Trieste-based maxi’s lead. Finally, the expected shift arrived 25 miles short of the Rock which they eventually rounded at 0700 this morning, 15 minutes ahead of Magic Carpet Cubed.

Bearing away around the Giraglia, the crew of Arca SGR saw the wind veer further to the south-east and build to 20-25 knots, enabling the former 2003 Rolex Sydney Hobart line honours winner (then known as Wild Thing) to reach speeds of 20-22 knots.

“It was really fast downwind after Giraglia,” said Arca SGR’s skipper Furio Benussi. “We went 22-23 knots at times, which was really nice. Upwind Magic Carpet is really competitive with us.”

“I am very happy because this boat and this crew are amazing,” said Benussi, once Arca SGR was moored off the Yacht Club Italiano’s Genoa clubhouse. “Everyone was really strong. It was important to be here in first place with this boat. Winning line honours is perfect for us.”

This victory comes on the back of Benussi’s maxi claiming line honours in the recent 151 Miglia-Trofeo Cetilar.

Finishing second on the water, but substantially ahead of Arca SGR on IRC corrected time, Sir Lindsay Owen-Jones was pleased with the result of his ‘family cruiser’. This was the dark blue Wallycento’s first event in 20 months although he has used Magic Carpet Cubed for holidays during this period.

“We were so close to beating a pure racer – one of the fastest 100 footers in the world,” he said. “That was very nearly a big thing. They sailed very well, so our hats off to them. We don’t have any big regrets. Their boat is just a little bit quicker than ours, so it was a good day, and we were all just so happy to get back on the water.”

A regular competitor, Owen-Jones compares the Rolex Giraglia race to an itch he has to scratch, even though the race is often light.

Of this year’s race he said: “It was full of really big shifts that you couldn’t possibly forecast. While over the whole area it was easterly, we suddenly at midnight got a west wind so some of the back markers caught us up a bit.

“Even when it is very light, there is usually a little wind at the top of the rig so you can build on that. I don’t think we ever dropped below about 5 knots of boat speed.”

Magic Carpet Cubed’s renowned Dutch navigator Marcel van Triest said that the light patch 30 miles short of the Giraglia was in fact a mini system. “It got calm and we worked to the north – it wasn’t a wind hole, it had a ‘full swirl’. It saw them [Arca SGR] go up, and for a long time they were doing 12 knots, when we were going 5 knots and they were in a north-westerly.”

However, all was forgiven after rounding the Rock, as the wind picked up to 20 plus knots, enabling the blue 100-footer to hit similar speeds.

Leopard was third home at 15:32:17 CEST having dropped back in the middle of the small depression.

“We had quite a nice race,” said the Australian tactician, double Olympic medallist Mitch Booth. “We were very impressed with how the boat went and the team did a great job. We got stuck in the middle of one hole – this big void in the middle of everything.

“The wind seemed to be coming from every direction at one point… But the rest of the race went very well for us. We thoroughly enjoyed it.”

Booth felt they had sailed the first downwind leg along the Italian and French rivieras well until they got to the turning mark off the Rade d’Agay: “We were right in touch with them both still and we almost had a crash with Magic Carpet going into that mark. “There was a bit of fireworks then…

“Overnight we thought we sailed well, and we came back to be very close to them, but then they escaped the light air better than us.”

Generally, Booth said they were satisfied with their result considering that Magic Carpet Cubed is “the master of this race” and the Italians [Arca SGR] “are the light air specialists. We can’t expect to match those guys in these conditions, but we were very happy with the boat.

“For Joost [Schuijff, Leopard’s new owner] this was his first real offshore race. He really enjoyed it – we couldn’t get him off the wheel!”

Further maxi arrivals are expected this evening while tomorrow a winner of the maxi class under IRC is expected to emerge.

Follow the race on the SGS tracker at: http://www.sgstracking.com/live/index.html?id=255