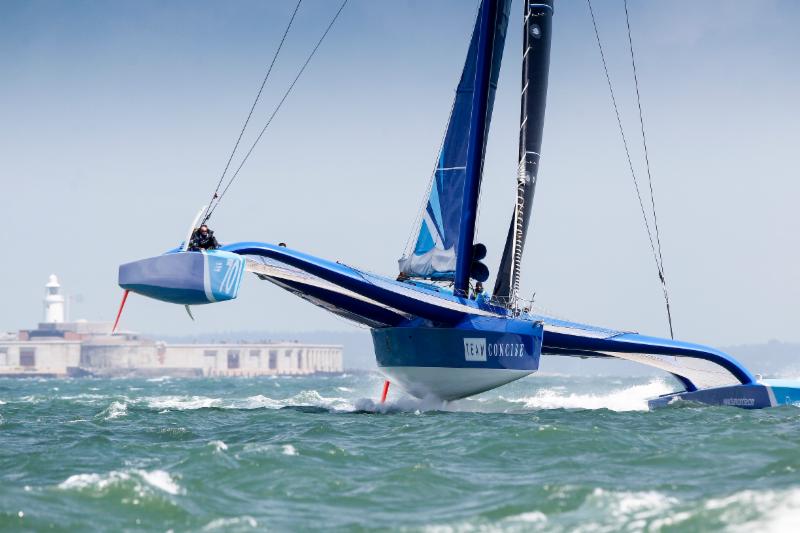 Some offshore yacht races struggle for entries, but the Royal Ocean Racing Club's biennial flagship event is not one of them. When the entry list opened on 9 January, spaces sold out faster than a Rolling Stones farewell concert; the 340 boat limit reached, incredibly, in just 4 minutes and 24 seconds. And this figure excludes the non-IRC fleets which will include a giant international turn out of Class40s and significantly, will be the first occasion the eight VO65s, set to compete in this year's Volvo Ocean Race, will line up in anger.

When the Rolex Fastnet Race sets sail from Cowes on Sunday 6th August, close to 400 boats will make up the combined IRC and non-IRC fleets – the largest ever entry in the race's 92 year history and a significant step-up from 356 in the last race.

So why is the race so successful? “It is within easy access for the largest fleets of offshore-capable yachts anywhere in the world,” succinctly explains Nick Elliott, Racing Manager of the RORC.

The Rolex Fastnet Race is one of the world's oldest offshore races, but the 605 mile course represents much the same challenge today as it did to competitors 90+ years ago: Typically an upwind westbound slog along the south coast of England, then full exposure to the open Atlantic Ocean on the crossings to the Fastnet Rock (lying four miles off southwest Ireland) and back, before leaving Bishop Rock and the Scilly Isles to port, en route to the finish off Plymouth.

However today, the standard of yachts and their equipment have improved immeasurably, as have the safety and qualification requirements for competing yachts and crews. This, combined with weather forecasting becoming a more exact science are all designed to prevent a repeat of the 1979 race, when a storm of un-forecast severity devastated the fleet and cost 15 crew their lives.

The modern day Rolex Fastnet Race fleet is also the most diverse, with yachts of every conceivable type represented. These range from the 100ft long Ultime trimarans, the fastest offshore race boats in the world, to the Volvo Ocean Race one designs, to the IMOCA 60s, used in the Vendée Globe singlehanded non-stop round the world race, while, with thirty four boats entered, the Class40s will be by far the biggest non-IRC class.

Meanwhile some of the world's most prominent grand maxis will be competing in the main IRC fleet. The longest is the Judel Vrolijk 115 Super Maxi, Nikata, while Ludde Ingvall is bringing his radical DSS-equipped 100 footer CQS all the way from Australia and one of the race favourites will certainly be George David's Rambler 88, that just missed out on line honours in 2015.

But making up the bulk of the IRC fleet are the Corinthian entries. Nick Elliott explains: “The Rolex Fastnet Race has that 'challenge appeal' which people are looking for more and more at the moment. It's something people can tick off their 'list'. Also, there are lots and lots of boats available for charter and spaces available for individuals who want to do it. Generally instead of people going racing every weekend, these days they'll cherry pick, they'll choose to only do bigger, more special events.”

A lot are crewed by families and friends or yacht club teams, many of whom come back year after year.

For example Tony Harwood is returning for his sixth race and his fourth on board Volante, a 1961 Camper & Nicholson 38 footer, in her day a Morgan Cup winner. In 2009 Volante claimed the Iolaire Block for being the 'oldest yacht to complete the course', while this year she is the lowest rated boat in the race (IRC TCC of 0.855).

So what is the attraction of the Rolex Fastnet Race? “It's like 'why climb Everest?' Because it's there, I suppose,” explains Tony Harwood. “We are heavy old crew in a heavy old boat, but we do about 5,000 channel miles a year. I like competitive sailing, even though the starts frighten the life out of me.”

It is also a 'father and son' affair, although son Simon races their Prima 38 Talisman. “It's never the same,” says the younger Harwood. “It is different every time and you always try to do better than last time. About half of the times I've seen the Fastnet Rock in daylight – two years ago it was thick fog and in 1999 there was the solar eclipse. Also it is a talking point. 'Did you do the Fastnet?' 'How was it?' That all brings me back every couple of years.”

When his father last competed aboard Volante in 2009, she finished in just under six days, while Talisman made it round in four days 7 hours and 46 minutes in 2015. A boat that in 2015 was comfortably finishing in Plymouth at roughly the time Talisman was still outbound to the Fastnet Rock and slower Class 4 boats were just passing Land's End, was Tony Lawson's Concise 10. The MOD70 trimaran class completed their race in a mere 2 days 17 hours 35 minutes, although this was slow, way off the multihull race record of 1 day, 8 hours and 48 minutes.

“That was the first big offshore race we did with the boat,” recalls skipper Ned Collier Wakefield. “It was pretty light, so we'd like to do a faster race. We should be able to do it in 26 hours if the conditions are right. The Rolex Fastnet Race is a prestigious race, it's one of the big ones for us and it is nice do a 'home race'.”

The 2017 Rolex Fastnet Race sets sail from the Royal Yacht Squadron line to the north of Cowes at 1200 BST on 6th August.