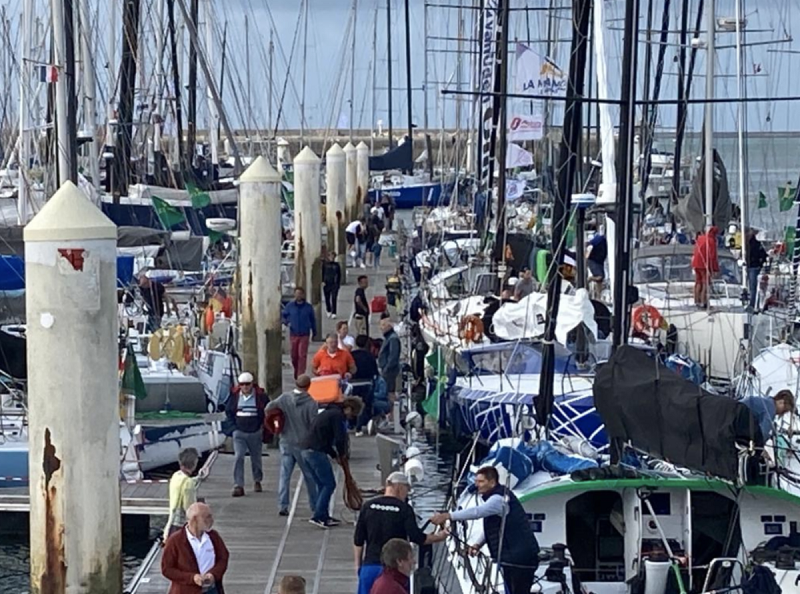 Like a trial run for tomorrow’s start of the Rolex Fastnet Race, today the Solent has been in a blustery mood with an overcast sky, rain and perpetual gusty winds – and the forecast for the start of the 49th edition of the world’s largest offshore race remains for 20-25 knot winds with gusts into the 30s, although the rain is set to subside.

Given the conditions, the Rolex Fastnet Race’s organisers, the Royal Ocean Racing Club, have decided to rearrange the order of tomorrow’s start times. They will now be:

Previously, IRC Zero, home of the largest monohulls entered in the Rolex Fastnet Race, was to have started last. Usually this allows the small boats to enjoy seeing them stride past. However, in the big conditions forecast, the RORC are steering a more prudent course.

“The wind angle now makes it fully upwind at the start, so we’ve made this change principally to make it safer for the big boats to get through Hurst Narrows,” explained Chris Stone, Race Director of the Rolex Fastnet Race.

In the meantime, the international flotilla has been slowly leaving Cherbourg, and other ports on the continent, ready to arrive off Cowes prior to start time.

Some of the faster boats are going to the wire with this – the Bouwe Bekking-skippered VO65, Sailing Poland, was due to leave Cherbourg at 0300, while Italian Giovanni Soldini’s modified MOD70 Maserati was departing at 0500.

Back in Cowes, Soldini’s competition at the front end of the MOCRA fleet has been out practicing. American Jason Carroll’s

Argo has been based in Cowes since setting a new record from Bermuda to Plymouth this summer. Her crew is an international all-star cast including French America’s Cup winner Thierry Fouchier, American Tornado Olympic silver medallist Charlie Ogletree and Britain’s high capped maxi-multihull veteran Brian Thompson.

Thompson says this is his eighth or ninth Rolex Fastnet Race, but he has rounded the Fastnet Rock countless additional times in other races and during record attempts.

Argo, the nimble, but sturdy trimaran, is more than capable of dealing with tomorrow’s big conditions, although even the highly experienced Thompson admits that they may do their utmost to avoid the severe wind against tide conditions.

“It is going to be a boisterous start for sure; windier than the last few years,” says Thompson. “We will have 20 plus knots most of the way to the Fastnet and over 30 for the first few hours when the tide is increasing the wind.

“The first six hours could be the toughest sea state-wise. We’ll have to settle in and see how we do. Maybe we are going for the best shifts or the flatter water, we are not sure. We’ll certainly be well reefed down.”

As to their prospects overall in the race, Thompson is bullish. “The forecast is quite good for us. Coming back, I think we can get on a fast angle down to the Scillies, and then downwind VMG with the gennaker to the finish. It is looking like about 15 knots downwind, and then dropping at the end, but we will have to see.

“We have a chance this time, because I don’t think the back of the fleet will be coming in with wind.”

Argo’s main competition will be Soldini’s Maserati, whom they have to beat into Cherbourg by around 30 minutes when they arrive early on Tuesday morning.

Several of the French grand prix classes are racing outside of the main IRC fleet in this year’s race, including the Ultimes, IMOCAs and Class40s.

Five Figaro 3s are also racing in their own class, including Britain’s aspirant Figaro sailor Cat Hunt and Hugh Brayshaw, double-handed on Ross Farrow’s Stormwave 2.0. A former student of the now defunct Artemis Offshore Academy, Brayshaw competed in the Solitaire du Figaro three times before joining Musto full time. Both he and Hunt have individually done the Fastnet twice before.

For a 32-footer, the foil-assisted Figaro 3 has huge performance – Stormwave 2.0 has an IRC rating similar to a grand prix 40-footer – and as they are one designs, their racing will be hot. This even though the top boats aren’t competing due to the proximity of the unofficial world championship of solo offshore racing, the Solitaire du Figaro, to the Rolex Fastnet Race.

“There are four other Figaro 3s and we want to beat all of them,” says Brayshaw.

Like the MOD70, the Figaro 3 is designed for transoceanic racing and withstanding gale force conditions, even wind-against-tide.

“I wouldn’t be surprised to see 35 or even 40 knots on the top of waves tomorrow,” continues Brayshaw of tomorrow’s conditions.

“We’ll have a small jib up and at least one reef in the main. Fortunately, these boats are hardcore, and we can smash through the waves without too much damage.

“We would all like a bit more comfortable conditions to start with, but we are going to get hammered. We’ll just get cracking into that and see where we’re at each headland. Hopefully it won’t be too upwind on the way back.”

Brayshaw reckons the last stage is where the race will be won or lost. Key will be staying as fresh as possible going into this and having a plan in case the wind is light and the powerful current is foul.

“We need to make sure we are close to land when the tide turns. I have done a few races around that point with those who know it well and there are gaps between the rocks you can take. But if it is too light, we will get the anchor out.”

A boat that should perform better in the big conditions of the first 24 hours, is the classic but heavily suped-up Nicholson 55 Eager, belonging to leading yacht broker, Chris Cecil-Wright.

The boat knows the way to the Fastnet Rock, for it competed many times as the yacht of the Lloyds of London Yacht Club. This included the 1979 race (her crew reconvened in 2019 to remember the race on its 40th anniversary).

Since then, Lutine has changed hands and in Rob Grey’s ownership was completely rebuilt. This included fitting a new carbon fibre rig that is 12ft taller, narrowing the shroud base, fitting a smaller cockpit and a new interior. Most recently, since agreeing to do the Fastnet Race, Cecil-Wright has added new North sails and a bowsprit.

“The Nic 55 was notoriously sluggish downwind. Now we are covered on every angle, which should be exciting,” Lutine said.

This will be Cecil-Wright’s first Fastnet Race, and in addition to family members aboard, there are several hotshots, including Richard Powell and Ben Vines.

Despite the forecast Cecil-Wright is looking forward to the race: “If it wasn’t blowing, it wouldn’t be an adventure. I like adventures and everyone on board is the same. A drift there and back wouldn’t be the same, but I may live to regret saying that!

“I am apprehensive. When we did the Myth of Malham we had two go down with seasickness and it reminded us how debilitating that is. The big thing on everyone’s mind is to avoid that.”

Once into Cherbourg, the Eager crew is keen to come ashore. “We have a table booked at the Café de Paris! But who knows what time, but we’ll be there!”