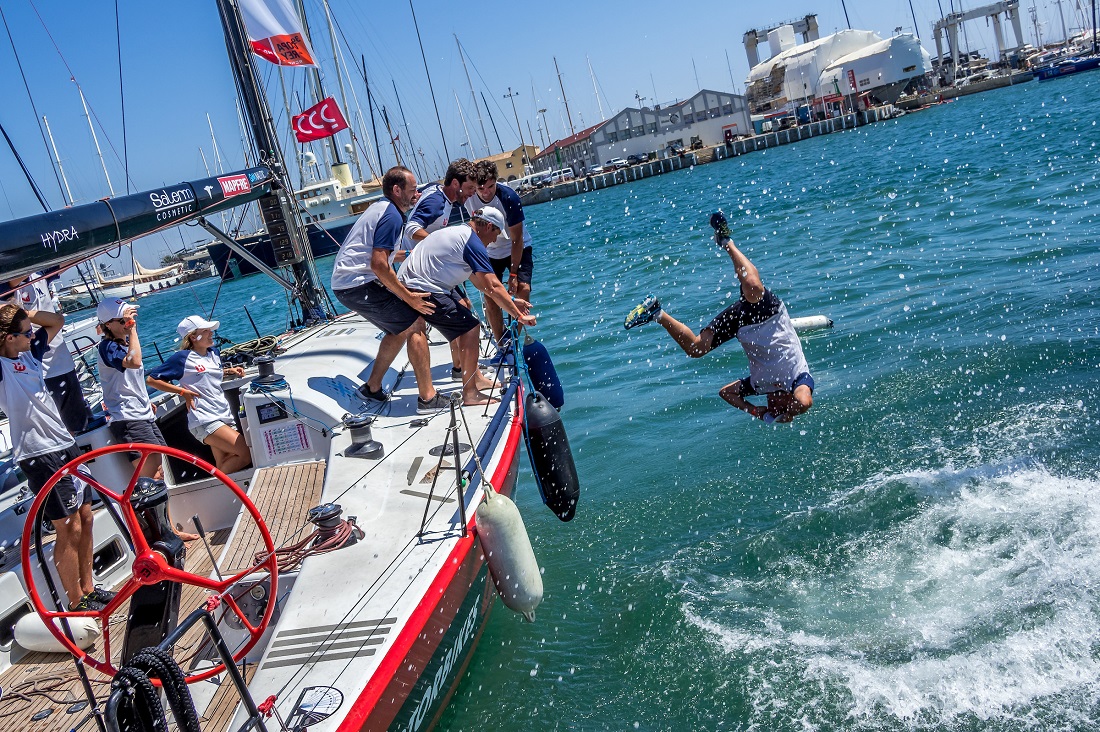 Teatro Soho Caixabank won by eight points and was beaten only once in the Finals series to win conclusively. The team, including double Olympic gold medallist Luis Doreste and 1992 Flying Dutchman gold winning crew Domingo Manrique, was only beaten to second twice from 11 starts.

Improving on their second in 2019 Andalucian ace Banderas smiled, “The bay of Palma really is a paradise for sailing. I’m super proud; we’ve been sailing together for 25 years.

“We have two gold medallists on board, including Luis, who nails every move, so boats have rarely crossed our bow. The manoeuvres were fantastic, the starts were fantastic. The truth is that we have done a great job”.

“This is our fifth trophy here which we add to several second and third places. I’m very satisfied, because since 2009 we’ve practically never been off the podium. Let’s hope we continue in this vein.”

While the handicap divisions’ top boat from the dominated, the competitive ClubSwan 50 class went to the wire. It was only a small error by a rival boat on the final run that allowed Germany’s Hendrik Brandis’ and his Earlybird crew to take the one place they needed to clinch the class title.

Led by Australia’s America’s Cup winner and Olympic gold medallist Tom Slingsby, a first timer in the class, Earlybird finished fourth today – narrowly passing NiRaMo on the last run – to only just stay ahead of the class world champions Hatari.

“I am delighted to win. It was a wonderful week and that was as exciting as it gets in sailing. Today the final difference was NiRaMo not doing a gybe set at the top mark last time, giving us the opportunity to split from them and caught them just before the finish.

“We needed to pass them to win the class. That was the winning difference, just half a length on the finish line. This is wonderful racing. You have such wonderful conditions here, sun and wind every day.

“I am a big, big fan of sailing here in Mallorca in the sea breeze in 15 knots, shorts and sunshine. What else can you wish for,” laughed Hendrik Brandis, owner/driver of Earlybird.

The German skipper wins his fifth title at Copa del Rey, triumphing twice in the Swan 45 before ClubSwan 50 wins here in 2017 and 2018.

“In the first six races Hatari was way ahead. We have some new crew, a new tactician in Tom, and we had to get into, but we did a bit better every day.

“Today we ripped our mainsail as we set it and thought we might not make the start. We had to sew it and it was really close to start time when we got it fixed. That was a little bit exciting but with a great outcome.”

Markus Brennecke’s Hatari finished second overall, but sailed the lowest points score across all 11 races. In a regatta format that is now a game of two distinct halves, Earlybird raised her game for the Finals after a modest start, her new crew and new tactician, Slingsby, finding their marks.

“Second is OK; there are worse things in the world. We sailed well across the whole regatta and maybe were not so good yesterday when it was very light, Hatari’s tactician, Markus Weiser said.

Giangiacomo Serena’s crew on G Spot, ClubSwan 36 Gold Cup winners in June in Sardinia, came out on top as expected in the new 36 class. They won the Copa del Rey award for the top boat in the One Design divisions, winning three races in the Finals series, to which they added a second and third.

“It was an amazing, beautiful week. Our boat is a rocket, and our crew works really, really well.” Grinned a delighted Michele Paoletti, the Italian 2000 Olympian who leads the G Spot team.

“We led the qualification series, but that advantage is cancelled out and you have to start again. That is very hard psychologically to start again. We feel we are consistent.

“Look around at this beautiful regatta, there are a lot of champions here, a lot of good boats here and so to win among them is really special, and with the King here too, it is lovely to win here.”

Andy Soriano’s TP52 Alegre remained on imperious form in the IRC Class where they repeated their win of 2017, taking victory by ten clear points ahead of a tie-break for second and third between Vadim Yakimenko’s Freccia Rossa and Jean Luc Petithuguenin’s Brittany crew on Paprec Recyclage which lost out on handicap.

“We have not raced for such a long time together it is nice to be back, it is good to come here and validate a few things and getting the win is always nice. We were able to stretch our legs and were fair bit ahead.” Said Nic Asher, Alegre’s winning strategist.

BMW ORC Class 1 went down to a single point too, with the overall winning boat the DK46 which won last year as Estrella Damm. Fernando Léon guided Hydra to four Finals wins, but their sixth in today’s 15-18 knot sea breeze was nearly only just enough to clinch the title.

The Women’s Sotheby’s Cup goes to Ana Pujol and Nuria Sanchez and their crew from Burriana near Valencia who triumphed by five points, taking the final winning gun today.