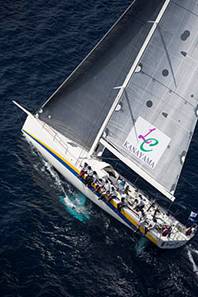 Of the 34 boats currently entered into the 2016 Rolex China Sea Race, eight hail from as far afield as Japan, Russia, Philippines and Australia, representing one of the strongest overseas showings for many years and underlining the appeal of this biennial blue water classic, first contested in 1962.

Chinese entry Seawolf led the way as the first all-Chinese competitor to enter this 565nm offshore race in 2014. For the 2016 edition, she is joined by another Chinese entry, UBOX, a Swan 82 owned by Wang Bin and based in Shanghai.

While Seawolf is intent on bettering her 2014 result, with the team citing “… the different challenges not encountered during inshore racing” as one of the major reasons for their return, 2016 will mark UBOX’s first Rolex China Sea Race.

The core of the 16-strong crew has been competing as a unit for almost four years and, having completing a series of coastal and short offshore races in that time, sees the 565nm Category 1 offshore race as “… the premier offshore regatta in the region [which] always attracts the premier sailors and teams around the world.” For UBOX, the race marks “the start of a full year commitment towards the Rolex Sydney Hobart in the end of 2016 [and] another step in the long term development of our team and crew members.”

Representing Japan on her way back from the 2015 Rolex Sydney Hobart Yacht Race is Humphreys 54 KLC Bengal 7 owned and skippered by Yoshihiko Murase while 2012 IRC Overall winner Zanzibar, a Humphreys 42, hails from Singapore. Ernesto Echauz (IRC Overall 1998 and 2008) will also return, campaigning TP52 Standard Insurance Centennial under the flag of the Philippines.

Fresh from Phuket King’s Cup with a stated aim of completing the stable of Rolex classic offshore races is Russian entry Megazip, a Cookson 12M owned by Sergey Khramtsov and skippered by Vladimir Chirkov, a veteran of nine Rolex offshore races including the Rolex Sydney Hobart Yacht Race, the Giraglia Rolex Cup, the Rolex Middle Sea Race and the Rolex Fastnet Race.

Team Manager Alexander Vodovatov expanded on his ambitions, explaining “the dream to attract Russian yachtsmen to these Rolex races, to popularize them. The dream of every team in Rolex races is to win a Rolex Yachtmaster –  these watches are pieces of art! …I would love that in our country a 600nm Rolex Race will appear one day.”

Run under the auspices of RORC, Rolex China Sea Race will start on 23 March 2016 in front of Royal Hong Kong Yacht Club’s Kellett Island headquarters in Hong Kong’s spectacular Victoria Harbour and will finish in Subic Bay, Philippines, hosted by Subic Bay Yacht Club. Race action will be tracked by Yellowbrick Tracking and will be shown live at www.rolexchinasearace.com.