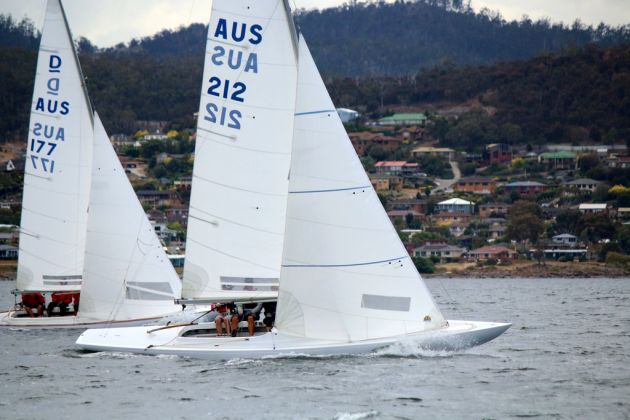 Nick Rogers and his long-time crew of Leigh Behrens and Simon Burrows have made an auspicious return to racing in the classic International Dragon one-design class on Hobart’s River Derwent.

Rogers, who has won a record 10 Prince Philip Cup wins and a world champion in Dragons steered Karabos IX to a 2-2-1 scorecard, sailing consistently on a day when it was all about 'picking the shifts and sailing clever.'

Over the past four summer seasons he has been racing in the SB20 sports boats, now the largest one-design class in Hobart and host to the Worlds for that class in 2018.

West Australian Sandy Anderson, sailing Linnea, finished second overall, including winning race two. Linnea sailed impressively, leading at the first windward and leeward marks in each race before ending up with a 4-1-3 score.

Gordon Ingate, in his 90th year and aiming for another Prince Philip Cup victory, sailed Whimsical into third place after placing only sixth in race one.

Sailing with a new crew, David Brittain, who flew down from Sydney, Whimsical improved with a third and a second in the next two races.

Light and shifty winds influenced results in race one of the Ted Albert regatta, but were more consistent at 7-12 knots from the east in the next two races.

Race two was particularly close, just 1 minute 50 separating the first and last in the 12 boat fleet.

Karabos IX, with a crew that can boast 21 Prince Philip Cups between them, chose to sail conservatively and achieved consistent results and overall victory.

The first two of the seven race Prince Philip Cup will be sailed on the Derwent today with a scheduled first race start of 11am.