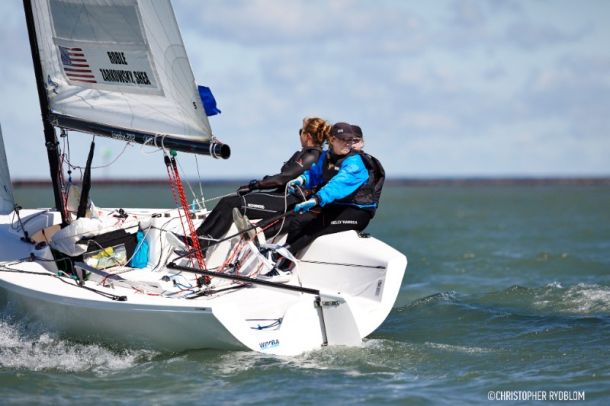 A Saturday with shifty, puffy and in general quite tricky conditions in the Buddy Melges Challenge, saw local hope Stephanie Roble and Anne-Claire Le Berre of France getting through to Sunday’s final. In the semi finals Roble beat Dutch Renée Groeneveld 3 – 2 after five thrilling matches, while Le Berre disposed of the previous dominant Anna östling, Sweden, with a 3 – 1 record.

“It was really difficult to know where the wind shifts were going today, but I think we made fewer mistakes than the others. Now we’re aiming for the top of the podium,” Le Berre said.

“My crew did an awesome job finding the right tactics in the shifts today,” Roble responded.

The fog and the clouds from Friday went away over the night to Saturday, leaving behind the beautiful sunshine seen on the first two days of match racing in the Buddy Melges Challenge. Lake Michigan offered a rather puffy and shifty Saturday breeze, causing the race committee to make a few course changes. As the Saturday afternoon progressed the wind gradually faded, with the buildings of Sheboygan generating some challenging shadows and eddies in the quite light wind at the windward mark, tucked up under the shoreline.

“It was definitely a challenging and very stressful day,” Stephanie Roble stated, adding: “We won the last two semi finals against Renée thanks to my crew, who did an amazing job finding the pressure and letting me focus on driving the boat. In the quarters Pauline Courtois won two out of three starts, but we managed to dig back and play the shifts right, also thanks to great crew work.”

“There was a lot going on out there and tough racing, all about picking the right shifts. Simply we lost one match too much, as they didn’t make any mistakes at all,” Groeneveld said, still enjoying being back in match racing after a few years absence. “It’s really good fun. The racing here is very well organized, with good quality and boats in excellent condition. I’ll do the next and final event in Korea for sure, and after that we will decide about our future involvement in the WIM Series.”

Anne-Claire Le Berre struggled with her speed in the big waves at the beginning of the week, but found it timely enough for the quarterfinals, despatching World #1 Camilla Ulrikkeholm Klinkby. Then the French team defeated World #2 Anna östling in the semis.

“We changed our boathandling to get faster upwind, and that helped. Today we sailed very well, playing the tactics and the shifts and managing to choose the right side of the course,” Le Berre explained.

“We had a hard time today, beginning when Juliana Senfft offered great competition in the quarters and we barely made it to the semis. Then Le Berre raced without mistakes, while we made a few costly ones. The lead changed a lot of times in every race, but she always managed to be ahead of us at the finish,” östling said, now determined to fight hard for third. “We need that to gain valuable WIM Series points.”