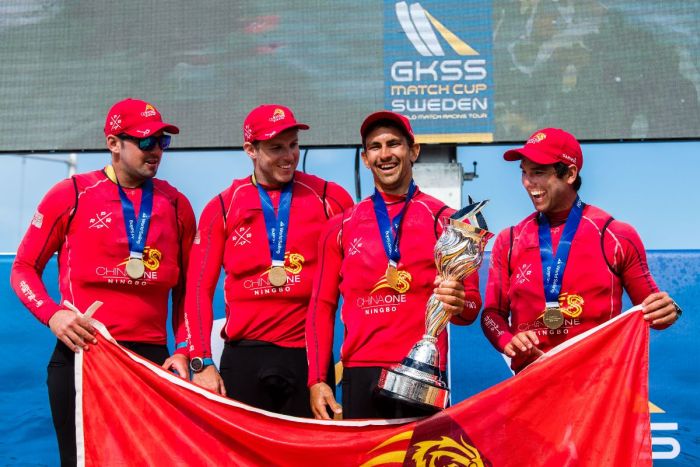 “It’s fantastic to win here again. Marstrand is a very special place to sail and we love coming here. The whole team [Stewart Dodson, Will Tiller, James Wierzbowski] sailed superbly today to make sure I could take the boat in the direction we needed. Our congratulations to Taylor and the team for sailing so well against us as well,” said Robertson.

The two former world champions were evenly matched at the start of the day for the first-to-three point final match. In the first race, Canfield was unfortunate to lose his port rudder blade in the tight pre-start manoeuvring allowing Robertson to put the first score on the board. Leading the second race start, Robertson was called over early and Canfield took the lead, but a slow gennaker deploy on board the US One boat allowed Robertson to gain the lead. Splitting gates at the leeward mark, Robertson found a right wind shift on the upwind leg, an advantage he was able to hold to the finish.

Canfield led the third race but a gybe set by Robertson at the first mark gave Robertson the overlap and lead change. Canfield pushed hard at the boundary but a green flag from the on-water umpires allowed Robertson to stay ahead and control the race to the finish.

“It wasn’t to be our day today but we are pleased with a second place and I’d like to thank my team [Hayden Goodrich, Chris Main, Mac Agnese] for such a great job. It’s the third time we have lost to Phil here in the finals but we will be back for sure,” commented Canfield.

In the Petit Final, local favourite Nicklas Dackhammar (SWE) was up against Torvar Mirksy (AUS) for the 3rd and 4th place deciders. Losing his first race to Mirsky, Dackhammar was determined not to disappoint the fans cheering his team from the shore, calling a better layline to the finish in the second match to snatch victory from Mirsky and go to a decider. Dackhammar was then able to use the teams momentum to overpower Mirsky in the decider match and take the bronze.

In the Nordea Women’s Trophy which ran parallel to this week’s GKSS Match Cup Sweden, it was local Anna Östling and her Team WINGS [Marie Berg, Annika Carlunger, Annie Wennergren, Linnéa Wennegren] that clinched victory for the second year in a row.