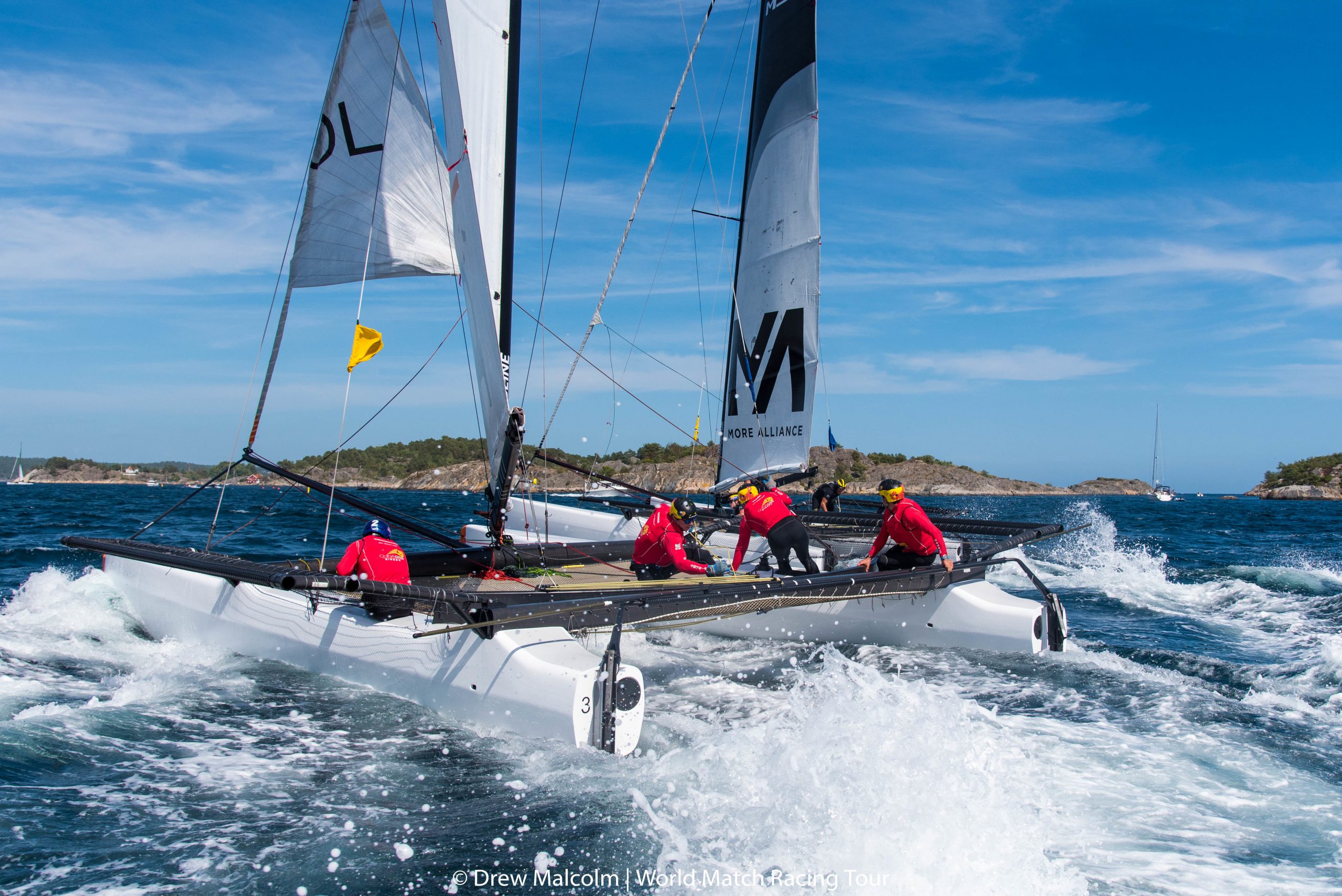 Risør, Norway (29th July, 2018) – With brilliant sun and a southerly wind at times exceeding 20 knots in the gusts, Risør saved its best conditions for the Semi Final and Final stages of Match Cup Norway.

New Zealand’s Phil Robertson with his China One Ningbo team dispatched his Semi Final opponent Nicklas Dackhammar 3-0 to line up against his old rival Australian Torvar Mirsky, who had beaten Måns Holmberg 3-1.

In the strong southerly breeze the race officials were forced to set up a tight start area, but, just metres off Risør pier, this provided a bird’s eye view of the action for the assembled spectators.

Running short on time, the final was shortened to a ‘first to two points’ affair. These were mostly decided in the pre-starts, where crews have developed some unique techniques only possible on their nimble, lightweight M32 catamarans such as controlled reversing at speed. “Boats go backwards in the pre-starts quite a lot, but these boats go pretty fast backwards,” explained Robertson. “It’s easy to stall them and to get out you have to go backwards but sometimes that leaves you in a stronger position – it is quite tactical.”

In the first line up, both boats were heading for the start line with time to kill, circling with intent to hook the other. Ultimately this led to Mirsky being called over early and thus obliged to start behind his opponent. Mirsky, who is reigning Match Racing World Champion, trailed Robertson around the course until the closing stages of the last upwind when he was able to dial down Robertson, who picked up a penalty for not keeping clear. Mirsky led around the top mark and went on to get the first point on the board, 1-0 in his favour.

Sadly for Mirsky, in the next race Robertson pulled off a similarly successful start. But once again the tenacious Australians managed to catch up and at the last top mark rounding Robertson squeezed across his bow on port, a move which the umpires green flagged. Robertson levelled the score line 1-1.

The most aggressive pre-start was in the decider when Robertson charged in to plant a penalty on Mirsky very close to the shoreline. This incident involved minor contact between the two boats as they clacked racks. “The rudders were a bit stalled and the boys thought we were going in through him – there was a bit of contact, but nothing too heavy,” said Robertson.

Despite mixing it up, separating at each mark and some hair-raising bear aways that saw both boats disappearing behind a wall of spray and hitting 25 knot speeds on the downwind legs, their crews gybing with the grace of ballerinas, Mirsky was able to recover his loss but was unable to overtake his opponent. Robertson and his experienced crew went on to collect the winning point and ultimately the victor’s prize of US$ 20,000.

“The boys are pretty slick with their crew work, so the boat handling comes pretty naturally for us which is nice,” said Robertson of his crew James Wierzbowski, Will Tiller and Stewart Dodson, who have been his M32 regulars for the last two seasons. “They were getting the boat around the track well. I could put the boat where I wanted and knew they would be able to follow. It is a nice thing when your crew is sharp, which was a big factor today – a boat handling competition.”

Of his team’s performance Mirsky said: “It felt like the boys were sailing really well. We were quick around the course and it came down to some good old match racing and umpire decisions. I think Phil’s guys match raced really well – they were smart and clean around the course. We were forced to throw in a bit extra and it made us look a bit untidy in a few situations. All credit to him for doing that to us.”

The singleton Petite Final was over before it began when Dackhammar’s ESSIQ Racing Team capsized early in the pre-start. This handed the third and final place on the podium to young Swedish match racer Måns Holmberg and his Swedish-Australian crew in their best ever result at a World Match Racing Tour event.

The World Match Racing Tour’s debut in Risør was well received by competitors, especially in this week’s heat wave. At the prizegiving, Mayor Per Kristian Lunden thanked the crews and welcomed them back to his town in 2019.