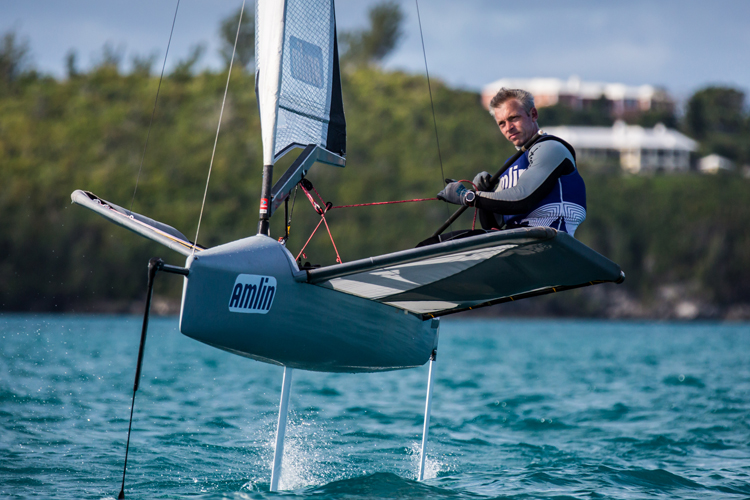 Lying in second overall entering the day, Greenhalgh won all three races to win the championship and the winner’s share of $5,000 of the $10,000 prize purse.

“The week has been fantastic,” said the 38-year-old Greenhalgh of Hamble, England. “It’s been good to come to a new venue. Everyone’s been very hospitable. I hope it keeps going.”

“Amlin is very proud to have supported this year’s successful Moth Regatta, which featured world class sailors in a world class sailing destination, Bermuda, the home of the 2017 Americas Cup,” said Rob Wyatt, CEO of Amlin’s Bermuda Branch. “We have been involved in specialist [re]insurance for over a hundred years and supporting exciting events like this enables us to reinforce our connection with the marine industry and with Bermuda.”

With the wind 6- to 12-knot winds right in Greenhalgh’s wheelhouse, he dominated the three races. His first victory was by nearly 1 minute and the second was by 1 minute, 30 seconds. He left little doubt as to who the best sailor was this week.

“Sailing is a game of boatspeed, there are no two ways around it,” said Greenhalgh. “If you can go faster than the other guys, then you’re halfway there.”

In a near repeat of last summer’s European Championship, Greenhalgh overcame regatta leader Chris Rashley for the victory. Rashley led Greenhalgh by 1 point entering today but finished 8 points in arrears in the final standings after placing 10-4-4. The 10th wound up being one of Rashely’s discards and he won $2,000 for finishing second.

“I had a bad start in the first race,” Rashley said. “There was a left hand wind shift just before the start and I couldn’t get up on my foils. I was pleased with how I sailed in the next two races.

“It was nice to lead for a couple of days but I expected Rob to win today. He really excels in those conditions. He’s quicker in the mid-range stuff,” said Rashley.

After the two leaders a pair of America’s Cup sailors battled it out for third and fourth. Paul Goodison of Artemis Racing wound up nipping Chris Draper by 2 points for 3rd place and won $1,500 while Draper won $1,000 for fourth place. Fifth-placed Simon Hiscocks won $500.

“I finished where I deserved,” said Draper. “I’ve only sailed a Moth seven days in the past six months, but I felt like my boathandling was better today. I’ve got some work to do on my setup.”

Greenhalgh dominated in part because he’s put in a lot of work on his setup. Today he was riding on his large foils because of the lighter winds. With the large foils it’s easier to get up on them and stay on them through tacks and jibes. As soon as a boat drops off the foils it loses significant speed.

Greenhalgh also used a canting rig system today. The system doesn’t cant the rig to windward. Instead it allows the rig to stand up straighter, which generates more boatspeed.

“A more vertical rig gives more horsepower,” said Greenhalgh. “It’s good in conditions like today, early foiling conditions, the 9- to 11-knot range. It’s definitely an advantage, but you need to know how to use it because it affects things like boom vang tension and tacking and how the boat handles.”

The Amlin International Moth Regatta is sponsored by Amlin plc, a FTSE 250-listed independent global insurer and reinsurer with operations in the Lloyd’s, UK, continental European and Bermudian markets. Additional sponsors include the Bermuda Tourism Authority, EFG International, Gosling’s, the Official Rum of the Regatta, and Kaenon Polarized.