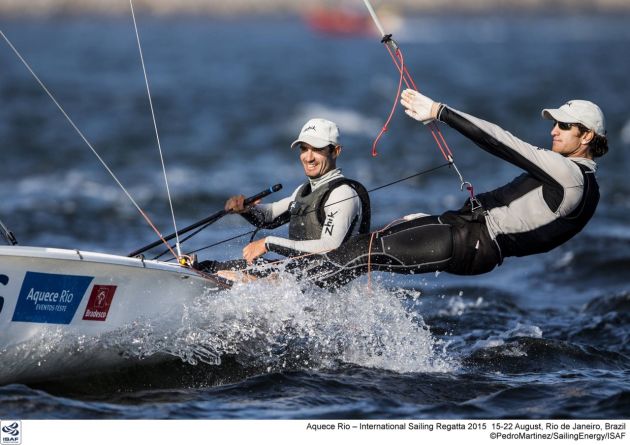 It’s 2014. It’s the hostile environment of the Maracanã soccer stadium. A despondent Argentinian team trudge off the field following a 1-0 defeat to Germany. They had lost the FIFA World Cup Final.

Fast forward a year and another Argentinian is at the home of Brazilian soccer. Lucas Calabrese was taking time out from sailing in the Men’s 470 at the 2015 Aquece Rio Test Event in Rio De Janeiro to reflect on his own sporting campaign and to look ahead at what is yet to come.

A big football fan, you may think that Calabrese would feel the weight of a nation on his shoulders as he sits in the dugout of the Maracanã. Behind enemy lines (in the nicest way possible that is). But Calabrese only feels excitement from a sport he has grown up with, and not having 80,000 screaming fans also helps the calm.

“Being in the Maracanã is awesome,” said a beaming Calabrese. “I’ve seen it on TV many times, I’m a fan of soccer and watched many games. I’ve heard a lot of things about this stadium. It gives me memories of the last World Cup Final where we [Argentina] lost here against Germany. It’s still very nice to be here and the next time we will be here will be the Opening Ceremony for the Olympic Games.”

His national team were part of the final act of the FIFA World Cup, and as Calabrese says, he will be there to open the next big event in Brazil. From one big South American party to another.

The 2014 FIFA World Cup welcomed 32 nations, a far cry from the 200 expected at Rio 2016, but one country stands out for Calabrese, Australia, but not for their football prowess.

The team lost all three matches to crash out early at the World Cup, but Calabrese expects the Aussie contingent in the 470 fleet to prove stiffer competition for him and his crew Juan de la Fuente, “Our biggest competition for the Olympic Games are the Australians [Mat Belcher and Will Ryan]. They have been winning many events over the last couple of years. Then there are the British [Luke Patience and Chris Grube], they are current silver medallists and there are a quite a few other countries who can perform very well.”

Performance is key when it comes to winning sport’s biggest prizes and performances can be disrupted by injury. The standout performer for Argentina and undoubtedly one of the best players in the world, Lionel Messi, has had his fair share of injuries. Hamstring strains. Broken bones. Muscle strains. And Calabrese is no different.

“Our campaign went a little strange last year [2014]. Unfortunately, we were forced to stop because I had a hernia I had to recover from. That stopped our campaign for nine months,” explained Calabrese.

“There was no sailing, that was pretty tough but we came back in Palma earlier this year [2015] and we tried to perform well. Of course we lost some time during those nine months but we’re back in the game, trying to get ready by using the time we have in the best way to perform at the Olympic Games.”

Calabrese has been on the comeback trail ever since his injury and has been quietly clocking up top ten results throughout since that return in Palma including two podium finishes in Hyères at the Sailing World Cup and the 470 South American Championships.

When it comes to soccer Argentina and Brazil are fierce rivals, but for Calabrese that rivalry is not felt. He competes in a sport where the rivalry is friendly and the South American link and sailing camaraderie is much stronger. Unlike his nations soccer team, Calabrese relishes his time in Brazil, “This is my fifth time and Rio. We’ve been lucky enough to come here often and we are trying to get ready for the Olympic Games. Hopefully we will come here more often.”

Since his time in Rio de Janeiro at the Olympic Test Event, his trips to his South American neighbours were more frequent, but there is one border crossing that will mean more than the rest. The time he crosses for the Rio 2016 Olympic Games.

Messi and co. returned to Argentina with runners up medals following extra time in the Final, for Calabrese the aim will be to bring back his own, of any colour. But there is no second chance or added time for Calabrese, the time is now.