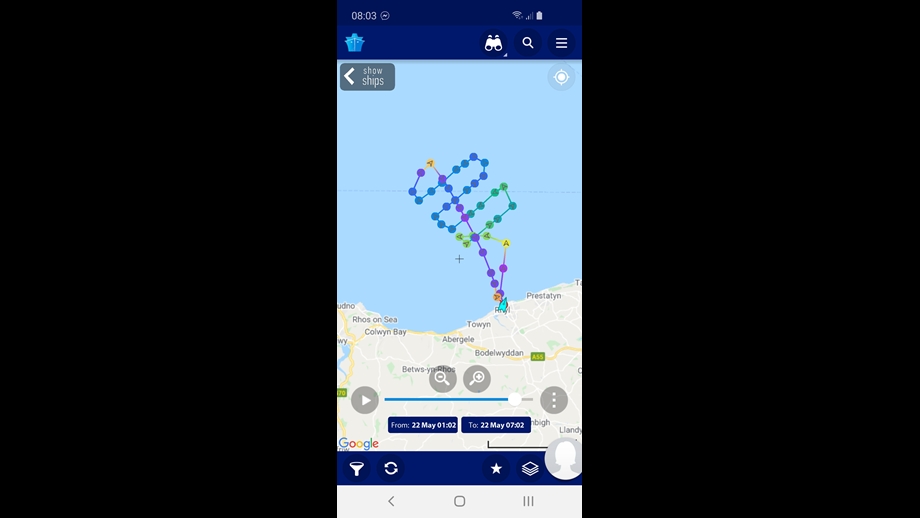 Just around midnight on Friday 22 May, the UK coastguard at Holyhead received a 999 mobile phone call from a yacht with two people on board, stating they had electrical failure and required assistance.

The phone call ended without an exact location being given out, just that the yacht was west of the South Hoyle Wind farm off Prestatyn. Rhyl All-weather lifeboat 'Anthony Kenneth Heard' was launched at 1.57 am into a strong wind and a choppy sea, to search an area around the given estimated position.

Holyhead coastguard then received further information from a yachtsman's wife stating a man was sailing his 32-feet yacht 'Barbaresco' from Falmouth to Fleetwood, and had not made contact since 6 pm the evening before.

A search pattern was given to the lifeboat after an anchored merchant vessel 'Bergen Troll' reported hearing a faint radio message on the distress channel stating the vessel was estimated to be by the South Hoyle wind farm. The lifeboat commenced a search pattern, also using white parachute flares to illuminate the area, whilst a constant watch was kept on the lifeboat's radar for any possible contact. The search continued until about 5.15 am with all vessels in the area being asked to keep a lookout.

At about 5.13 am, the rig support vessel 'Vos Pathfinder' and also the coastguard, received a distress coded message via radio, of a vessel in distress some distance further north than the search area, off Blackpool and in the Morecambe Bay gas field area. The support vessel launched one of their response craft, and located the man and his yacht. Due to the position further North than anticipated, Holyhead Coastguard tasked Fleetwood lifeboat to launch, and recover the yacht and it's skipper back to Fleetwood.

At this time (9 am Friday 22 May) Fleetwood lifeboat is still towing the yacht back to Fleetwood.

As the vessel was too far North and rescue was being delivered by another lifeboat, Rhyl lifeboat was stood down, returning to Rhyl at 6.15 am.

Martin Jones, Rhyl RNLI Coxswain says ' This is the first major search and rescue operation our new Shannon-class lifeboat was requested to perform. The boat and all systems performed well, and keeps the volunteer crew safe'.

He added, 'Social distancing due to the Covid-19 outbreak was adhered to where possible, and it should be noted that despite the lockdown still being in force in Wales, many crew were able to attend, including shore crew and tractor drivers'.

The casualty had safety equipment on board but due to the electrical failure, it malfunctioned.