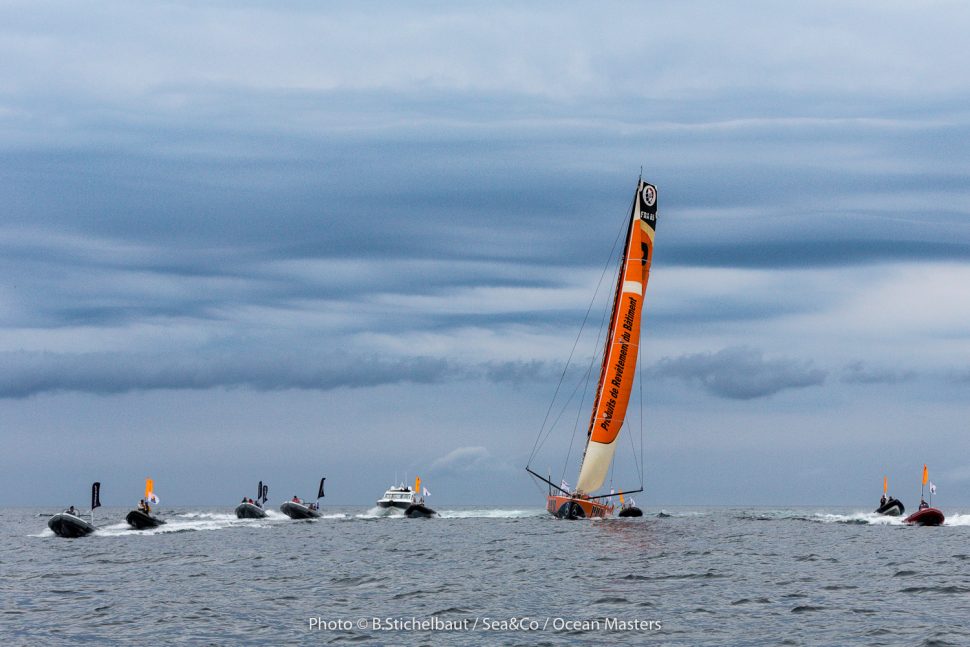 Vincent Riou fired a defiant broadside across the bows of the new foiling boats after finishing fifth this morning (Friday) in the inaugural 2016 New York – Vendee (Les Sables d'Olonne) race presented by Currency House and Spacecode.

Faced with an even more complicated Bay of Biscay than welcomes the first three boats home, Riou (PRB) was followed in four and a half hours later by Tanguy de Lamotte on Initiatives Coeur, the ex-2006 PRB, that Riou took third place on in the 2008-09 Vendee Globe, after the dramatic rescue of Jean Le Cam in the Pacific.

For the 44-year-old Riou, winner of the 2004-05 Vendée Globe, and a perennial favourite, the real frustration was that he is not used to coming so far down the fleet. “Along with the Route du Rhum (in 2014) this is my second worst result in an IMOCA race, so I’m not going to jump for joy,” Riou said, “but it was a transat that was full of lessons and gave me a progress report on my programme. It’s satisfying because even if there was a small spanner in the works, overall, both man and machine are ready to face the oceans.”

Riou, dubbed “Vincent the Terrible” by Le Cam after his relentless performance when winning the Vendée Globe, remained bullish about his chances against the foiling boats, that occupied all three places on the podium in this race and have won the last three solo IMOCA transats.

“They (the leaders) had a great race,”Riou, who is in a non-foiling, previous generation boat, said. “I’m very sorry not to have been one of them. When I had to let go (because of technical problems) I was at the front, so I don’t have many regrets. I don’t know what sea conditions they had, but I don’t think they crossed that section of the North Atlantic very quickly, despite ideal conditions to cut loose. I don’t know why we didn’t see the foilers average 25 knots over 4 days there? We saw them going at 17 to 18 knots, Alex occasionally 20 knots, which is nothing extraordinary in those conditions. My only regret is not knowing why we saw those speeds there.”

Riou had emerged at the front of the lead group that survived the early collisions on Monday, May 30, a day after the start. He led the race for exactly a day until Alex Thomson (Hugo Boss) passed him. But remained near the front until four days in another collision and technical difficulties forced him to divert for a 12-hour pit-stop at the port of Horta on Faial in the Azores with his technical team to repair a leak and some power issues. He restarted in seventh and was quickly back in the hunt.

For more details on the race and finishers head to Ocean Masters.