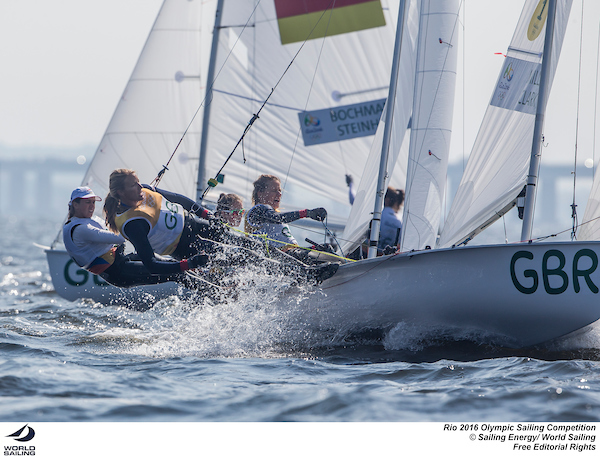 Although the London Silver medallists Hannah Mills and Saskia Clark of Great Britain had secured the Gold at Rio 2016, leading by an insurmountable 20 points going into the medal race, the battle for the minor placings was always going to be fascinating.

London champions Jo Aleh and Polly Powrie had endured a wretched regatta, suffering a disqualification in the first race and a UFD in the sixth, both of which loaded them with maximum points. As a consequence, they started the medal race on 48 points, just one ahead of Anne Haeger and Briana Provancha (USA) and two ahead of Camille Lecointre and Helene Defrance (FRA). Another two points away were Ai Kondo Yashida and Miho Yoshioka (JPN). Any of these four crews could win Silver or Bronze.

Conditions were much better than yesterday's glass-out, with the wind gauge showing 12 to 17 knots from SSW.

There was an immediate split in the fleet with the Brits going left and the Kiwis going right towards the beach. There was plenty of crossing going on, and cries of “starboard” but at the top mark USA had done best, rounding ahead of The Netherlands and New Zealand. The British were sailing comfortably in fifth.

All 10 boats went to their right with kites flying and the Dutch and British were first to gybe. The American women were sailing the race of their lives, extending away from the pack and looking good for the Silver. At the bottom gate, they held a 6 second lead over the Dutch with the Kiwis under pressure from Slovenia but just four seconds further back.

On the second beat, the Kiwis again went right early but the Americans covered and crossed ahead. The choppy water was keeping the crews on their toes and a good tack by New Zealand saw them close the gap, sailing to windward and slightly behind Slovenia and USA while the Dutch did their own thing. The British were staying out of the way of the battle for minor medals, happy to just sail around the course to collect their Gold.

At the top mark for the second time, Slovenia had hit the lead and the Dutch were second 10 seconds behind. The Kiwis in fourth had overtaken the Americans, who were sixth, but now needed to forget that battle and chase the Dutch.

Through the gate the Slovenians had a clear lead and the Dutch snuck through four seconds ahead of the Kiwis. That was the way it finished, with Aleh and Powrie doing enough to win New Zealand Silver, while the French had come through a point ahead of The Netherlands for Bronze.